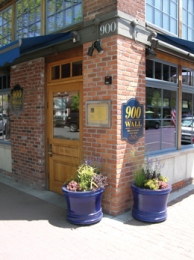 One of Bend’s hottest restaurant spots has re-emerged as “900 Wall” with new operators adding their own distinctive flavor to the downtown scene.

The location at 900 NW Wall Street was previously home to Merenda Wine Bar and Restaurant – shuttered at the beginning of the year after falling victim to the economic downturn, which impacted several local eateries.

But key players from the original management team including General Manager Mike Millette, Executive Chef Cliff Eslinger, Dining Room Manager Kate Black and Wine/Bar Manager Marcus Egge regrouped and secured investor backing before embarking on a five-month labor of love to reinvent the popular gathering place according to their own ideal.

Local contractor DE Rink Construction was enlisted to help with a subtle but thorough remodel project – enhancing both functionality and form – and a collaborative effort paid off when the new and improved facility opened its doors to an enthusiastic public over the Memorial Day weekend.
Millette said: “We had a vision we wanted to realize and it took a while to get everything the way we wanted, but it is very gratifying after all the hard work to see it turn out just how we envisaged.”

The space has been opened up in a variety of ways, including a more accessible entry and additional under-stair lounge enclave to widen the bar-side scope, while noise levels previously accentuated by hard surfaces like exposed brick walls and wooden floors have been dampened down with the addition of ceiling acoustical tiles.

New cool urban fabric high-backed booths serve the dual purpose of also softening the audio while offering intimate group settings, including a row of three in increasing size by the restaurant area’s north wall that the operators jokingly refer to as Pesci, De Niro and Brando.

A rustic textured paint theme together with harmonious, more understated, lighting adds to the cozy feel, while deep stained concrete countertops feature throughout.

The restrooms have undergone a major facelift and a wide range of upgrades have been carried out in accordance with the best practices of the Americans with Disabilities Act (ADA) including a lower level bar section, widened doorways and better accessibility and clearances all-round.

One of the biggest changes has been seen in the kitchen area, which now boasts new robust flooring and ubiquitous stainless steel, together with revamped countertops and slate tile surrounds bordering the centerpiece brick oven.

The attention to the food creation hub is particularly gratifying for Eslinger, who commented: “It was really important to provide a more functional space for employees in the kitchen area, and I think we have made a significant improvement to that environment.

“A lot of the changes we have executed are not necessarily noticeable but have increased functionality and efficiency, both at the front and back of the house.”

Eslinger added that the goal of the new menu was to be more “approachable” with a range of choices appealing to all different palates – and price points – from a varied mix of small plates like the roasted halibut cheeks, to daily specials, pastas, pizzas and entrees covering a culinary range from brick-fired rotisserie chicken to New York Steak with caramelized shallot butter, potato-gruyere gratin and green beans.

One previous establishment regular commented after the holiday weekend “soft opening” that 900 Wall had pulled off the seemingly improbable feat of “raising food excellence and lowering prices”.
Millette also pointed to the strong, extensive wine list compiled by Egge, incorporating the most comprehensive “wines by the glass” selection in town, featuring 23 choices in the Red category alone.

Millette added: “The aim throughout this process has been to provide excellent food, service and value in a comfortable social setting, not unlike the European approach where the restaurant is more of a social focal point.

“We are also particularly proud that we have re-employed around ninety per cent of the previous staff, while adding some great new hires to our team which now involves over fifty people.
“We are like a family and have all pulled together to help launch this new venture.”

Indeed this was truly a team effort, with input from all quarters on the best elements to feature – including the oft-heard comments on abating noise in the space – and long hours logged by all involved to aid the refurbishment effort, including staff helping with staining and painting, and the building owners Steve and Jennifer White even pitching in on the wall covering front.

Eslinger observed: “We all live in, and are involved in, the community and are supportive in a number of ways, from providing family wage jobs to buying products from local purveyors.

“We want to help play our part in revitalizing Bend. We could have cut corners and tried to open earlier but we felt it was important to look after locals and to take the time to get it right the first time.”
On the rationale for the title of the new enterprise, inspired by the iconic spot’s marquee address, Millette said: “Calling ourselves 900 Wall really anchors us downtown.

“This is a historic cornerstone location on a key corner and the name solidifies our presence downtown, at the center of the area’s unique atmosphere.

“We were able to seize an opportunity during a challenging time and we know there is a lot of hard work involved, but we are dedicated to providing quality and consistency and are certainly in it for the long haul.”

He observed that many businesses were rooting for the prime venue to re-open, as perhaps a vote of confidence on the future and resurgent vibrancy of Bend’s downtown, along with the recent rising of Zydeco Kitchen and Cocktails from the former Volo location on Bond Street, and the takeover by Joolz of the old Bistro Corlise on Wall.

“We are pleased to see other previously vacated sites reopen, especially under local ownership,” said Millette. “We exchange ideas and are supportive of each other as part of the restaurant community.”
DE Rink Principal Dave Rink and Project Supervisor Mark Cardot hailed a “real team effort” in seeing the project through to a successful fruition, while project manager Rick Stilson commented: “We wanted to be proactive in addressing any anticipated issues to make sure this prominent place in downtown received worthy treatment.

“We collaborated with a number of parties including the 900 Wall staff, the City of Bend, OLCC and the local health department to make sure their approach and our perspective meshed.
“We were aware of the requirements and addressed how best to meet them to ensure the best possible outcome.”