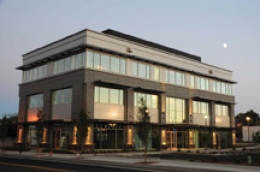 A new landmark building has emerged in downtown Madras, marking a fresh chapter in the city’s development while paying tribute to its rich past.

The Harriman Building was completed in September and now stands proudly on a prime corner of Fourth Street, evoking turn-of-the-century solidity with its brick and stone-accented exterior and large interior lobby.

The sturdy steel-framed, three-story, 15,000 square foot mixed-use project – designed by Hennebery Eddy Architects Inc. of Portland and built by Robinson Construction, which has a local office in Bend – consists of two floors of commercial office suites over ground floor retail and restaurant space.
The brick façade at the commercial floors continues the vernacular language of historic eastern Oregon small downtowns, featuring a thoughtfully detailed Flemish bond on its exterior with varied texture and other coursing at specific architectural elements.

The building boasts high ceilings, while steel canopies outside provide pedestrians protection from the elements and encourage the walk-ability of downtown. There is also both on and off-street parking.
“We wanted to create something that would stand the test of time and be a flagship building in the heart of downtown,” said Rick Allen, a member of the ownership consortium made up of local investors, and a well-known Madras commercial broker and businessman.

“There had been no new brick-built, multi-storey addition to the local commercial landscape here in decades and we envisioned a pride of ownership property that was modern but harked back to early 20th century architecture, while maintaining the delicate balance of being visible without looking out
of place.”

The property on which the building sits was previously a “blighted block” – affectionately known locally as “the Hump” after the group of decaying buildings atop a pile of dirt – purchased from the Madras Redevelopment Commission in early 2007.

Allen – who hopes the $2.6 million project will help spur further redevelopment in the vicinity – said the principals had initially focused on an alternative corner, but the Fourth Street opportunity became more compelling after several prior attempts by the MRC to attract a master developer for the site failed.

“It really is a ‘Main and Main’ address where southbound traffic meets a confluence of highways,” he added. “We were originally going to put apartments on the top floor but just couldn’t make the numbers work.

“We ended up deciding on retail and office on the ground floor, with a mix of primarily office uses on the second and third levels, especially geared to the smaller entrepreneur.”

The concept seems to have been well received so far, with the building already 70% occupied – aided by introductory leasing incentives – which is impressive in these challenging times.

A key component is a restaurant for the ground floor, with the recent announcement that “Geno’s Italian Grill” is set to open early this summer following tenant improvement work.

“Actually our feedback indicated a restaurant was the number one thing people were looking for; specifically something new to the market and of benefit to the broader community,” said Allen. “Coincidentally, Geno’s wanted to expand from another location and incorporate a wider concept, including a full bar, so it was a good fit.”

Other first floor tenants include a home décor and gift shop, while second storey occupants include Anytime Fitness, a hair salon and Willow Canyon Properties; a full-service management company.

The third floor, offering views overlooking downtown Madras, houses a mix of 150-square-foot office suites and larger offices spaces, and has attracted users from attorneys to a construction management firm and a non-profit organization. A conference room and support service is available for each suite, giving smaller business owners the opportunity to secure a turn-key situation at a relatively low cost.

Allen said that the principals wanted to add high-quality features that set the building apart, including expansive windows and custom stained glass in the lobby courtesy of Bullseye Glass, a leader in promoting glass art worldwide and led by one of the property partners.

“We wanted to go the extra mile because we are looking long-term,” observed Allen. “Many may say it’s a risky venture, especially in the current economic environment, but we are a local group of investors, committed to this community and in it for the long haul.

“Out of town investors would likely not have touched it as it is not a quick money-making type of venture, but we are looking ten to twenty years out. You have to believe in your town and step up.
“There are nine of us to spread the risk rather than share the wealth, but when you love your community it makes sense.”

The Brickhouse Group’s dedication to the authenticity of the project even extended to an exhaustive effort to find an appropriate name for the building which would relate to part of the
town’s history.

The building’s lobby and public areas feature photographs, with the assistance of the historical society, and memorabilia illustrating the railroad heritage.

“The public has taken to the name and seems to have taken the building to heart,” said Allen. “I think they appreciate the paying of tribute to our past and our history, while being modern and relevant”

Hennebery Eddy principal Tim Eddy concurred that the name was evocative of the region’s past, adding that the railroad trestle framed that side of town and provided an impressive backdrop to add to the context.

Acknowledged as a leader in urban design, his company has consulted extensively with the city of Madras and sees the Harriman Building as the first in a series of developments to revitalize the downtown.

Explaining the project team vision, he commented: “The idea was that the character of the building would be solid and permanent. To that end we used materials like brick and stone to make a hundred-year structure.

“There was a sense that we wanted to create the same feeling that a merchant or group of merchants at the turn of the century would bring.

“A lot of clients in the project are all locally tied to Madras; are part of the community, proud of their heritage and of this building.

“I also grew up in a rural area and have a personal connection and commitment to Madras and the architecture in this case was not so much reminiscent as in the same spirit as an early twentieth century masonry building.’

Eddy added that attention was also paid to sustainable design, including the twelve-foot exterior canopies, which are primarily fixed shading devices for the benefit of tenant, the public walking by and the building’s energy efficiency.

Aesthetic features include the creative masonry patterns and varied textures with a Flemish bond on the exterior and cut stone at the base of the building.

Eddy commented: “It was a fun collaborative project, including the colored art glass in the interior involving one of the partners’ companies.

“To the people involved, this was a lot more than a speculative office building.

“This is an important piece of downtown, while being a fairly quiet building that does not jump out.
“Construction used a lot of local materials and local contractor which also helps emphasize the natural connection to the community.”