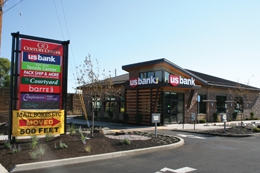 In an encouraging sign of Bend’s continuing evolution, another former west side mill site is being transformed into a mixed-use commercial and social center.

Following in the wake of pioneering forebear the Deschutes River-straddling Old Mill District and the more recent Mill Quarter off Colorado Avenue, the former Bright Wood Corporation base along Century Drive is the latest mill work plant to be reworked with a modern twist.

Property owner Dave Hill is redeveloping a portion of the cluster of utilitarian buildings into commercial suites, while a new stand-alone 3,600-square-foot U.S. Bank building incorporating a drive-through is also under construction.

Demolition of an old structure which housed a Mail Boxes Etc. franchise made way for the bank pad and opened up access for the new retail mall to the rear, now housing the displaced MBE – to be renamed Pack, Ship and More in the fall – along with a growing roster of lifestyle co-tenants including the barre three fitness studio, Complements Home Interiors, Volcano Vineyards, Salon Envy and Backporch Coffee Roasters.

The retail-oriented center retains elements of the original industrial use, with robust beams and a cinder block exterior blending with subtle new enhancements such as skylights and metal-framed garage-style doors with glass panels, giving an overall artsy, eclectic feel.

A couple of warehouse-sized buildings are also being renovated, with one currently home to the three-court West Bend Tennis Center. The imminent announcement of a major new tenant set to occupy over 20,000 square feet is also rumored to be in the pipeline.

Remaining structures totaling around 50,000 square fee on the corner of Century and Commerce Avenue – including a 10,000 square feet tilt-up concrete building with a Douglas Fir-beam interior – are likely to be redeveloped in the longer term.

Space left between building footprints forms a natural courtyard area that has also been spruced up with pavers and landscaping, providing a tranquil spot for special events, complemented by a contiguous 6,000 square feet indoor venue, complete with stage, sound system and lighting.

The newly-branded Century Center’s first foray into the performing arts scene has been the ongoing Wednesday night “Hump Day Hash” series featuring music concerts by local artists. Homegrown food and beverages are also available and the event showcases a different local non-profit organization each week benefitting both from exposure and a portion of vendor sales.

In the fall, the complex will also provide a new base for popular local grassroots arts festival Bend Roots Revival, which was staged at Parilla Grill and Victorian Café until it outgrew that space last year. Bend Roots founder Mark Ransom said the new venue is a great addition to the town’s capacity, while he has also been instrumental in working with Hill on the weekly concert series along with local music community stalwart Erica Reilly.

Hill added: “The event space ties in with the courtyard and is bookable for use by various groups within the community. It has been very well received so far and I think is appreciated as another option for various functions and events in a cool setting.”

Hill has owned the approximately 9-acre property site sandwiched between Century Drive and Columbia Street since 1986.

After Bright Wood left in late 2008, Hill went through an exhaustive land use process and successfully petitioned the City to reclassify the property from an Industrial to a Mixed Employment Zone.

The move opened up the site to a wider range of uses in an area of increasing surrounding commercial development, including the Safeway and Rays-anchored retail complexes to the west, and the nearby Century Village Center.

Hill said: “I am pleased with the way things have gone and feel fortunate regarding the tenants we have secured so far.

“It was a tough road originally to rezone the property, but the City was reasonable to work with and ultimately saw the benefit of the potential mix of uses, especially given the proximity to residential neighborhoods.

“I think the local community is happy to see the new services and uses, so it’s a win-win situation.”
Hill observed that a big plus for incoming tenants and the bookable event center is the voluminous parking capacity on site.

Several additional acres are also on hand for future development, but Hill added: “We have been focused on redeveloping what’s here already first, as I couldn’t just let the buildings
sit vacant.

“Others wanted to scrape the property and turn it into a generic shopping center, but I think it’s more of a benefit to renovate and retain a flavor and character which harks back to Bend’s original roots as a timber-based economy.

“As far as future development goes, we will be patient and keep to our goal of having a good mix of tenants that work well together and support each other.

“There has been somewhat of an organic growth regarding the users that worked out to date, and I also really appreciate the input and experience of Brian Fratzke and the rest of the real estate team on this project.”

Fratzke, principal of Fratzke Commercial Real Estate, said: “After working with Dave the last two years, I have appreciated his openness to ideas and willingness to be creative within the parameters of what is practical for the property while also delivering value to potential users.

“Dave had a vision of a community focal point and we worked on realizing that aim with him considering the current market.

“The local tenants in place to date appreciate having a hip, bohemian space – not unlike the Pearl District in Portland – and the owner’s participation in helping build out and customize suites.

“Dave has put a lot of energy and resources into creating an updated, cool environment for prospective tenants while also offering value through competitive rental rates reflective of today’s market.”

U.S. Bank regional president Stacey Dodson added that her group had been looking for an appropriate opportunity to expand on the west side of Bend for a number of years and the new site fit the criteria of the exposure, accessibility and high traffic counts provided by frontage on Century Drive, while also being close to a high concentration of residences.