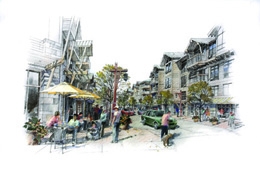 Developer SilverStar Destinations, owner of 16.5 acres in Sunriver Resort that includes the aging Sunriver Mall, announced plans to scale back plans for its European-style, mixed-use village following the failure to purchase 6.2 acres of commonly owned land in the community.
The developers were hoping to gain approval from Sunriver homeowners to purchase the acreage in a special election in February to incorporate into a master plan that includes retail, commercial, office and residential dwellings, but the measure failed to receive the necessary 60 percent approval by the homeowners.
John Goodman, managing director of SilverStar Destinations, announced a scaled-down version of the original plan, a new citizens group that overwhelmingly supports the project and the addition of Leland Consulting Group at a standing-room only meeting one day before the new plans were introduced to the Board of County Commissioners in a public meeting.
The developers are also seeking an amendment to the Sunriver Urban Unincorporated Community sections of the Deschutes County Comprehensive Plan and Zoning Guide to create a new Town Center District in Sunriver to pave the way for the mixed-use project.
“We’ve spent most of our time since the election trying to figure out what path to take,” Goodman said. “We own 16.5 acres and we’ve been trying to figure out what is feasible as developers while doing what is best for the community.”
Changes in the new plan include:
• The elimination of several tracts of resort condominiums with only 375 residential units now onboard (of 500 originally planned) which equates to 22 units per acre. The 375 residences will add eight percent of housing stock to the existing 4,100 units in Sunriver.
• The addition of one level to the centerpiece destination hotel that anchors Cascade Village while the commercial core (85,000 square feet) remains the same.
• The elimination of a main access road with the Beaver Drive bypass remaining intact.
• Added vertical height to buildings at the main entry with four-story buildings that include commercial on the ground floor.
• A new site for the Country Store that allows the existing store to remain open during the project.
• The elimination of the parking garage at the southern entry following heavy opposition from existing homeowners.
“We plan to build from the south to the north in phases starting just south of Goody’s and will build to LEED standards for sustainability and efficiency,” Goodman said.
Goodman also introduced Dave Lewis, head of Citizens for Sunriver, which strongly supports the project. Lewis told the audience that the project is at a crossroads.
“It’s important that accurate information about the project be given to Sunriver homeowners and the county commissioners with the commissioners’ vote on the zone change critical to the project,” Lewis said.
A second public hearing on plans for Cascade Village is scheduled April 30 in the Homestead Conference Room at Sunriver Resort.
Leland is the biggest addition to SilverStar Destination’s team in its quest to go forward with the project. The highly-respected, Portland-based consultant has worked on 80 resort projects, 80 downtown revitalization plans, about 3,000 building projects and consulted for City of Bend officials on the Bend Downtown Urban Growth Boundary and with developers of Black Butte Ranch.
Leland didn’t pull any punches, telling the audience that the existing Sunriver Mall is “an economic tsunami” built in 1974-75 and additions over the years were built without a master plan.
He went further to say that the mall has a “negative effect on Sunriver” because it is the front door to the community.
“I think the timing is perfect to be planning a project like this,” he said. “It meets the criteria of similar successful projects as the heart of the community while selling a lifestyle.
“The existing mall cannot be fixed. It’s all over but the funeral. This project will provide a new and stronger heart for the community.
“You don’t get many bites at the apple. The capital ($250 million) is here with a great design team: OZ Architecture of Boulder, Colorado; Scott Edwards Architecture of Portland and W & H Pacific of Bend onboard. The timing is perfect to do this.”
Information: www.villageatsunriver.com.