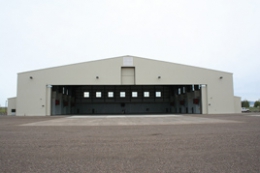 An injection of public funding together with the ingenuity of a top flight construction and design team has helped launch Oregon’s largest field aircraft hangar east of the Cascades in Madras.

The 39,000 square foot facility, including repair shops and offices, will be used by Butler Aircraft for maintenance of its DC-7 air tanker fleet, and future use of the supersized C-130 Hercules.

Founded in 1946 in Redmond, Butler Aircraft contracts with the Oregon Department of Forestry and the State of California for multi-engine aerial firefighting.

Illustrating the scale of the Hercules, Building Design Engineer Charlie Rowles, PE, of C. A. Rowles Engineering, said: “We’ve all seen them; they look like a flying boxcar with four engines. They are so big you can drive tanks into them.”

The pre-engineered steel building was supplied by Behlen Building Systems of Nebraska, and Larry Havniear, principal of general contractor Havniear Construction, said an “incredibly smooth” installation of the structure onto the slab was a testament to the quality of the pouring work undertaken by Deschutes Concrete.
The City of Madras orchestrated financing of the $3.65 million construction project with the help of a $2.1 million grant from the state lottery-backed Connect Oregon II initiative, which targets non-highway transportation infrastructure, and is leasing the purpose-built facility to Butler Aircraft.

Other government sources were also utilized, including through the Oregon Economic and Community Development Department (OECDD) which has a stated mission to assist existing businesses to create and retain jobs, with the City putting up matching funds of its own totaling around $500,000 to enable construction of the hangar, which is expected to create 13 new jobs.

BUTLER AIRCRAFT
Butler Aircraft Vice President/General Manager Nan Garnick said: “This really is a wonderful facility and the whole team did a great job of figuring out how to serve our needs optimally.

“The background to how this all got started is that one of our chief pilots began looking at options for expanding operations early in the decade and he talked with the Madras airport manager.

“In 2006 when my husband Travis (Butler Aircraft President) and I bought the company we took up the conversation again and talked with the Madras City Manager, who indicated it may be feasible to explore public grants regarding meeting approvable criteria for such a project.

“That proved to be a workable strategy and following completion of construction we anticipate starting to move into the building next month.

“Right now we are primarily involved in getting all airplanes on duty in anticipation of the upcoming fire season, after which we will recover aircraft into the facility and carry out maintenance work.

“It will be great for us to have such an up-to-date and comfortable environment to work in.”

Butler Aircraft has been based at the Roberts Field airport in Redmond since the company’s inception in 1946 and Garnick said it will retain that facility for functions such as fixed wing storage. Plans are also in the pipeline to expand the flight school division.

The air tanker portion of the business is transferring to the Madras building, which is mostly made up of hangar space but also has perimeter loading bays and shop space as well as administrative offices, which can be sealed off from the rest of the structure in the case of an emergency. Previously, in Redmond, the larger heavy aircraft could only be partially parked under roof.

Garnick added: “Everyone involved had a hand in the specifications for the layout and the new facility will allow us to pursue more opportunities for the future, for example in the area of the air freight industry.”
The hangar includes a sophisticated fire suppression system. The original concept was for a water-based mechanism but as the requisite volume was not available without potential major additional costs, the team switched to a foam retardant method.

Project Superintendent Dave Jasper said: “During a test the hangar was filled five feet deep with foam inside two minutes.

“The system was modified from a military application and is just one example of the different technologies and expertise that was brought together for this project. There was a great team involved all round displaying a lot of ingenuity.

“Everyone went above and beyond the call of duty on this assignment.”

Jasper played a major role in value engineering of the system, being cognizant of budget constraints and the use of public funds, resulting in significant savings compared to original cost projections. He also paid tribute to Chuck Hegle of American Sprinklers, Inc. for his part in the fire suppression element of the project.
The hangar features massive fully automated rolling doors – operated and protected by a series of sensors – which part from the center, together with a bi-fold opening above integrated into the assembly to allow for aircraft tail clearance.

A heavy-duty upper track and trolley system helps guide and stabilize the door.

Ceiling-suspended lighting in the hangar provides optimal illumination through hi-tech long-life bulbs.
Perimeter loading bays accessed by satellite overhead doors allow, for example, prop shop and avionics work to be undertaken without the main hangar doors having to be opened.

Some 16 tractor trailers of steel were brought in for the building, with the main doors and bi-fold alone utilizing 160,000 lbs of rolling steel. The Havniear team was pleased to report zero time loss due to injuries on the job site.

The building is fronted by over 6,000 square foot of offices, including a training area and a window section in the adjoining wall enabling the operations manager to observe processes in the hangar interior. A secure assembly can isolate the administrative area in the case of an emergency, while sensor-linked ventilation fans are cross-connected in the hangar to maximize exhaust draught efficiency.

The design of the project began in August 2008 under the general project management of Harper Houf Peterson Righellis Inc., which has offices in Bend.

Rowles said: “The proposed user gave a general idea of needs and desires for the project, and we looked around the North West at facilities catering to the service and maintenance of aircraft regarding the potential best elements to combine.

“We developed all kinds of different layouts which were refined in conjunction with the overall team.”

Rowles has worked on pre-engineered steel buildings, including hangars, for the last 18 years but said this was his first large publicly funded hangar project. He said one of the challenges of the project was working within the budget constraints to deliver the best solution, adding: “It gave us a unique opportunity to combine proposed budget figures with meeting the needs of Butler Aircraft, that was looking to do a large hangar but couldn’t do it in Redmond. There was a continual process or refinement and improvisation”.

Rowles said that an additional challenge that occurred relatively late in the construction process was the necessity of integrating a foam fire suppressant system into the already-built structure.

He said: “The initial design did not call for fuelled aircraft and were able to plan for water-based system, but requirements changed and we began a six-month effort to switch to a foam based system.

“I think it’s worth noting that Dave Jasper was a key element in the success of the construction. His ‘can-do’ attitude and dedication and drive kept things moving forward.

“The City of Madras also provided a steady hand and its focus on the big picture kept the rough spots workable in the spirit of helping each other.

“Working with the city and county building departments resulted in great working relationships with all the public agencies and there were many opportunities, for example, to navigate through building code interpretations and to work closely with those entities.

“It really was a great collaborative process in every dimension”.