You are at:Home»News Pages»E-Headlines»How ELD Devices are Impacting the Trucking Industry
By CBN on January 30, 2020 E-Headlines

The recent ELD Mandate has had a huge effect on the trucking industry – as well as other areas of industry and commerce in which buses and other commercial vehicles are used – so what is it all about, and why all the fuss? To the outsider, it may seem that a simple change has been made, but in fact, there is much more to it. What is an ELD, and why have truckers and fleets been forced to fit them to their vehicles?

What is an ELD?

ELD stands for Electronic Logging Device; these are compact digital devices – they come in a range of styles and sizes – that plugs into the engine diagnostics port in a truck. Put simply, they are designed to record various aspects of the usage of a truck in real-time. They record whether the engine is running or not, how long it has been running for, and also have GPS so that a fleet manager can see where a truck is at any given time, and if it is on the course it is meant to be following.

Perhaps most important is that the ELD also logs the hours the driver has been at the wheel, whether the driver is currently driving, waiting or off duty and other aspects of the job. This is a legal requirement as there are certain laws relating to the number of hours a driver can be at the wheel of a vehicle before he or she needs to step down, and possibly be replaced.

Prior to the ELD mandate, many trucks were fitted with logging devices, but these were rudimentary devices that relied upon paper documents. As such, they were not reliable, could easily be open to tampering, and, while they performed a service, were not up to date with the 21st-century laws on trucks and working hours. The ELD is entirely digital and cannot be tampered with, as it is more fully automated than the old version. If you want detailed information, we recommend you visit bestelddevices.org, which is an excellent resource for all things to do with ELDs.

The Impact on the Industry

There are many benefits that come about thanks to the ELD, especially where keeping track of trucks is concerned. Fleet managers can now see where all vehicles are at any time – usually via a simple app on a hand-held device – and can track drivers’ hours accurately and precisely. Some of the devices also provide information on fuel usage, which is a very useful set of data for both fleets and owner-drivers, while the system ensures that all relevant laws are adhered to at all times.

However, the fact that the fitting of an ELD by January of this year was a legal requirement – with no extensions due to be given – has also meant great expense incurred by fleets and solo truckers. The cost of an ELD device varies depending on the model and can involve a one-off payment or a monthly subscription.

When we consider that there are reckoned to be 15 million trucks operating in the USA – that figure includes all types of trucks but not other commercial vehicles such as buses that are also bound by the mandate – that’s a lot of money that had to change hands to comply with the law. 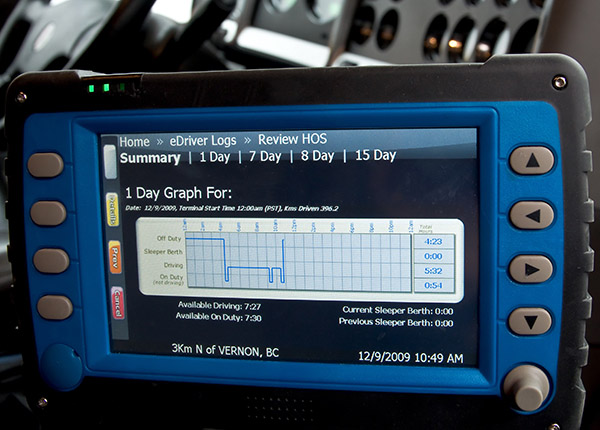 What Drivers Think of the ELD

Drivers are mixed in their reception to the enforced use of the ELD. However, many are concerned about the way it has changed their working lives, and not for the better. A recent article in ‘Business Insider,’ for example, quoted one long-time truck driver as saying the hours he is on the road – those that he is paid for – have been drastically reduced.

Whereas he used to take a nap while his truck was unloaded after driving for 8 hours – a 4-hour nap at least – and then get another five hours driving in during the day, he is now limited to a maximum of 11 hours on the road in a given day. His old 100-hour weeks are no longer possible.

Of course, the aim of the mandate is to improve safety on the roads – and it most certainly will – but the impact on the lives of those involved has yet to be fully seen.