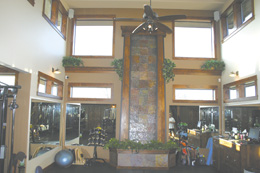 A prominent business location between Bend’s downtown and Old Mill District has been revitalized with the emergence of the Falling Waters Injury and Health Management Center – a comprehensive treatment facility leading a new wave incorporating ‘functional medicine’ as part of an integrated approach to patient care.

The high traffic corner skirting Wall Street and Colorado Avenue was previously home to an assorted cluster of latterly vacant buildings before the site was purchased and transformed by Falling Waters owner Dr. Mark Davies, who undertook much of the design work himself to optimize the intended function. LB Engineering and general contractor SunWest Builders together with a team of local subcontractors were also involved in the project.

A three-building retail complex was converted into a two-building campus, with the main structure gutted down to the studs, remodeled and extended, from 4,000 to 7,400 square feet, to accommodate a state-of-the-art healthcare center including functional medicine, chiropractic, physical rehabilitation, massage, aquatic therapy, personal training and nutritional services.

A two-suite, 1,947 square feet building was also renovated and is currently being offered for lease, potentially to compatible healing arts-related users, while the former Colorado Cat Clinic was scraped to improve site visibility and access.

Forming a focal point of the rehabilitation and fitness area in the central facility is an 18-foot iron and pine-framed slate waterfall designed by Dr. Davies, which inspired the new location’s name. Water features, together with the warm rustic pine décor, comfortable non-intimidating atmosphere and friendly staff all contribute to the stated aim of “putting visitors at ease, regardless of health condition, age, shape, size, physical ability or health goal.”

Dr. Davies, who originally hails from Canada, moved to the Central Oregon area in 2005, and contemplated converting his former location on Scalehouse Loop in Bend before spotting the new site and the opportunity to build on his diverse education and experience to create a unique, research-based health facility that combines best practices of conventional, natural and sports medicine resources.

A first visit will typically include a thorough history and physical examination, diagnosis, and review with the patient of potential complicating factors and a discussion regarding a variety of treatment approaches, physiology and the theory behind a balanced treatment plan.

Dr. Davies said, “Of course conventional medicine is important, especially in acute cases, but sometimes there can be a tendency towards the idea that there is ‘a pill for every ill. Functional medicine offers a whole new approach, increasingly taught in schools now, with an overall functional model evaluation that incorporates a triage-type perspective, which can include looking at everything from the medical assessment to physical therapy, rehabilitation, massage and nutrition counseling.

“We are not limited to any one technique; we can employ different elements and have developed standardized protocols and systems for our patients.”

Functional Medicine is recognized as a rapidly growing science-based healthcare approach and is suggested as perhaps the most effective use of the avalanche of new information coming out of the human genome project that modern medicine has seen.

An abundance of research now supports the view that the human body functions as an orchestrated network of interconnected systems, rather than individual systems functioning autonomously and without effect on each other.

For example, we now know that immunological dysfunctions can promote cardiovascular disease, that dietary imbalances can cause hormonal disturbances, and that environmental exposures can precipitate neurologic syndromes such as Parkinson’s disease.

Dr. Davies, who is the only member of the Institute of Functional Medicine in Central Oregon, added, “A functional medicine approach views  ‘symptoms’ as  ‘clues’ that can help solve individual health ‘mysteries’.  Once the ‘clues’ are understood and underlying root causes are identified, interventions can be focused on treating the cause of the problem, not just masking the symptoms.

“This approach allows us to help many patients find answers to complex, chronic conditions and is also invaluable in identifying key individual anti-aging strategies.”

After clinical and possible laboratory evaluation, treatment strategies including dietary and activity modification, when combined with nutrients targeted to specific functional needs, which can allow patients to regain control and be in charge of improving their own health and changing the outcome of disease.

Dr. Davies has a wide-ranging educational and clinical background in the healthcare field and is one of less than 600 physicians in the United States that has had postgraduate education in Functional Medicine. He has incorporated the approach into clinical practice for many years, with an impressive track record of success.

He began his career in health care as a Registered Nurse (RN) in his hometown of Victoria B.C., Canada.  He was certified in critical care and has worked in all aspects of critical and trauma / neurological intensive care.

After completing pre-medical studies in Canada, he pursued a Doctor of Chiropractic degree (DC) from Western States Chiropractic College in Portland, Oregon and graduated in 2001.

In 2004, he was appointed as a Qualified Medical Evaluator (QME) by the California State Industrial Medical Counsel.  In 2007 he was certified and designated an Independent Medical Evaluator (IME) for worker compensation claims in Oregon.

After completion of post-graduate coursework and board examination, Dr. Davies joined a group of less than 1500 physicians who are professionally credentialed as a Certified Clinical Nutritionist (CCN) by the International and American Association of Clinical Nutritionists.

He currently holds professional membership with the American Academy of Anti-Aging Medicine as well as the Institute of Functional Medicine, both of which help their number keep pace with current cutting edge research in natural medicine, and his experience has ranged from private practice, including as clinical director of a multidisciplinary rehabilitation facility as well as hospital settings practicing occupational medicine.

His exposure to traditional medical, natural medicine and sports specialty fields and cultivation of a broad range of education and clinical experience, has culminated in the creation of the Falling Waters facility, with physician-orchestrated care touted as “research-based, results-driven, red carpet service.”

Though non-surgical in nature, the center has aligned with select healthcare professionals for referral or cross-referral needs where necessary, including pharmaceutical pain management, co-management of care or possibly more invasive procedures, such as injections or surgery.

Dr. Anthony Hadden, of North West Brain & Spine, said, “Whether patients have, for example, been involved in an accident, suffered a sports injury, or have chronic disease, the nice thing about Falling Waters is that it incorporates a lot of the modalities that I utilize, all in one building.”

Physical Medicine Specialist Dr. Mark Wagner added, “I like that the facility is ‘vertically integrated’ and has everything needed for a full rehabilitation course – aside from specialized medical intervention – in terms of the medicine, physical therapy, fitness, nutrition and relaxation techniques.”

Of the new facility, Dr. Davies said, “With the expansion we have tried to design the facility to make use of every square foot, having experienced what did and didn’t work in previous environments.”

The center also includes a cutting edge aquatic therapy pool unique to the region, which includes different levels from a deep pool to shallower areas ranging from seven to four feet, an underwater treadmill, adjustable current and temperature options and massage jet wand. It also utilizes a salt water system, which provides a natural way to sanitize the pool and avoids the irritation that many people experience in chlorinated environments.

“Around 80 percent of body weight is reduced in the water, which is particularly helpful, for example, when a patient can’t put much weight on an injured joint.”

Stahl actually first encountered Falling Waters after winning a free massage, but after meeting with Dr. Davies and absorbing the center’s philosophy, she became enthusiastic about the concept and ended up joining the team.

She added, “This is an amazing place, with state of the art equipment and highly professional staff who speak the same language and are always exploring further education and latest techniques. I hope the whole integrated approach is the way the medical field goes, because to a large extent it is so fractionalized right now.”

Another key staff member who started as a patient and lost some 70 pounds since first encountering Falling Waters is Nutrition Coach Vicki Kipp, who supports the ‘First Line Therapy’ program focusing on personalized, physician supervised nutrition and lifestyle recommendations, which has been lauded for its effectiveness in fat loss, treating cardiovascular disease and metabolic syndrome.

Kipp said, “There is a direct correlation between overall health and nutrition, with long term lifestyle changes forming a big part of the equation rather than dieting or exercise alone.”

Office Manager Barb Davies said the standardization of care and team involvement regarding the most effective treatment options was a big part of the Falling Waters philosophy, adding, “Every department also had input in the layout of the new facility, which led to, for example, all the physical therapy rooms opening into the gymnasium.

“We also wanted to create a relaxing, harmonious atmosphere to get away from the sometimes sterile feel that patients encounter.”

Attention to detail is evident throughout the facility, from the warm lobby/waiting area complete with fireplace, through knotty alder doors and trim, to soothing background music and feng shui style waterfall features.

Environmentally conscious practices included the main building being completely reinsulated and new energy efficient HVAC systems and lighting installed, while the air dehumidification system in the aquatic area has the ability to regulate the water temperature, reducing the need to operate the pool boiler for heating and resulting in significant cost savings. Also, the design incorporated both windows and skylights in all therapy rooms to maximize natural light.

Bowles added, “Probably the most challenging issue with the project was the site logistics, as is often the case with downtown area projects. Project Superintendent Mark Leavitt had to carefully coordinate deliveries, storage and parking in and around the site, and both vehicle and pedestrian protection were an area of emphasis during the course of construction.

“I would like to say that SunWest appreciated the opportunity to work with Mark and Barb Davies, Selco Credit Union, LB Engineering, and the entire project team. It was also especially rewarding to contribute towards the revitalization of a highly visible site that connects downtown with the Mill District.”