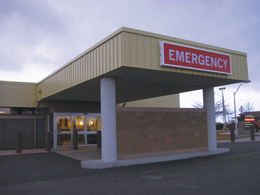 There were many proud faces at a recent ribbon cutting ceremony celebrating delivery of the newly remodeled Family Birthing Center and expanded Emergency Department at St. Charles Medical Center in Redmond.

Numerous generous community donations and grant assistance helped fund the much needed improvements, which included updated suites in the birthing area and more comfort and accessibility for the emergency registration and waiting area at the busy facility.

“We hope all patients will enjoy the newly improved healing environment,” commented Bob Gomes, CEO of St. Charles Redmond. “As always, we take pride in being here to serve our community.”

Other improvements include state of the art lighting, ADA-accessible bathrooms, increased storage and electrical outlets and new window treatments that give patients privacy while still allowing natural light to filter in.

Meanwhile, the Emergency Department has a new entrance that allows easier access, including helping separate cars from ambulances, as well as new private rooms complete with sliding glass doors rather than curtains, to improve patients’ experience. The outpatient laboratory was also moved from being in a separate building to contiguous with the registration area, providing add-

Visitors will benefit from heated exterior sidewalks in the winter, while also noticing a “blast wall” between the Emergency Department entrance and the Airlife air ambulance program’s helipad bordering the parking lot.

Inspiration for the blast wall came from project architect and principal in charge for BBT, Don Stevens.

Stevens said, “The wall installation came about after pursuing two trains of thought.

“First, as part of my continuing education activities including a study of the latest elements of emergency suite design, an interesting element was the need in larger cities along the east coast to create walls that could protect emergency entrances from a potential terrorist bomb threat.

“At the same time, I interviewed the Airlife pilot regarding the needs of the landing pad at St. Charles Redmond, and one of his concerns was the backwash from the helicopter rotors.

“The blast of air would send debris, gravel and so on right toward the main emergency entrance. The light bulb went off and I recommended a blast wall for protection from the takeoff and landings of Airlife and the project team thought it was a great idea.”

SunWest Builders Project Manager Wayne Powderly said one of the challenges of the project, which is consistent with working in a sterile environment and around the public, is in regards to patient safety and infection control.

He said, “The first thought is always…safety and infection control and consideration for hospital operations which demands constant and clear communication with staff. Though logistics could be challenging, working with staff was wonderful – they were very understanding and considerate.

“We were surrounded by a great and experienced team. It was a pleasure to work with everyone involved.”

The ribbon cutting was led by long-term hospital supporter June Overberg, who for more than a decade has helped with the St. Charles Redmond Volunteers Golf Tournament and the annual fashion show the volunteers host every fall – frequently serving as chair for one or both events which raise a combined average of more than $10,000 a year.

In addition to her role with the volunteers, Overberg kicked off the community fundraising campaign in 2010 to raise dollars for the most recent expansion and remodel, and her initial gift was the foundation that encouraged caregivers, physicians, other volunteers and community members to donate to the projects.

“To have a fulfilling life you have to have a passion,” Overberg said. “My passion happens to be the hospital.”

St. Charles is a private, not-for-profit Oregon corporation and is the largest employer in Central Oregon with more than 3,000 caregivers in Bend, Redmond and Prineville. In addition, there are more than 350 active medical staff members and nearly 200 visiting medical staff members who partner with St. Charles to provide a wide range of care and service to our communities.