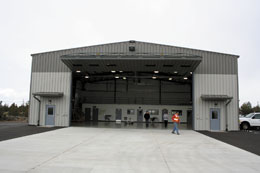 Standing proudly atop the black tarmac of Redmond Airport is the new helicopter hanger for the Bonneville Power Administration, finished this past fall by HSW Builders of Bend.   BPA is a federal agency created by an act of Congress in 1937 to market power from the Bonneville Dam on the Columbia River.   Headquartered in Portland, they are one of four regional federal power marketing agencies within the department of energy, transmitting electricity throughout the entire Pacific Northwest via more than 15,000 miles of electrical lines and 300 substations.

From their new operations hanger, BPA employees patrol and inspect the company’s power lines from their Redmond substation and beyond.  All transmission lines are flown by surveillance teams at least three times per year, searching for frayed cables, broken insulators and any tower damage.

The construction project took approximately six months to complete, most of which was spent accommodating the site’s excavation needs prior to building.

“It was a long prep.  We had to bring the building pad up 12 feet from its previous height using a standard engineering fill,” said Dan Ashby, HSW job superintendent. “That’s a considerable amount of dirt.”

Home-Sweet-Home for two Bell 407 helicopters, the 5,500 square-foot hangar is a pre-manufactured building delivered by Advanced Steel that provided the Varco Pruden unit, and was erected by the engineering services of Bend’s David Tacy of David Tacy Construction, Inc. .  An adjoining helipad was created to meet all FAA standards for airport runways.   Inside, its eaves height is 22 feet and is primarily heated by high output, overhead radiant heaters and all air circulation running through the air handler.    A break room with full kitchen, restrooms with showers and storage areas are all independently serviced by a separate furnace and A/C unit.

A 65 X 70 foot main floor is epoxy coated white over an 8-inch slab on concrete with embedded grounding pins to dissipate any static buildup generated by the helicopter.  Illumination for the spacious hangar is provided by industrial-grade, high bay flood lights.  The whisper-quiet, 40-foot Bi-Fold hangar door by Schweiss opens via heavy duty nylon lift straps rated at 29,000 pounds tensile strength.  An upper level mezzanine was specially constructed to be used for structurally sound storage out of steel channels and concrete.

“The upper deck, that’s really unique,” said Ashby.  “It’s something you don’t usually see in an airplane hangar.”
Rob Kelleher, senior project manager with HSW, explained some of the specific construction rules which apply to aviation buildings and flammable liquids.

“Per building code, whenever there’s anything that will eventually contain fuel, every outlet, electronic device or appliance must be placed and installed 18 inches above the floor,” said Kelleher.  “Because fuel vapor is heavier than air, you want to do everything you can to be safe and prevent any potential fire due to an
incidental spark.

“
Kelleher and Ashby were extremely pleased with the end result of the entire project.

“It’s a pretty simple, smooth construction thoroughly designed with non-combustible building standards.  It turned out very nice.  BPA was ecstatic with it,” smiled Ashby.   “They replicated the style from another helicopter and jet hangar of theirs in Spokane out at the airport.  The design is especially clean looking with a minimal amount of exposed interior ducts and conduits.”

The hangar was all constructed under the guidelines of the federal “Buy America” program which requires the majority of the products used to be manufactured entirely in the United States, with certain waivers and exceptions allowed if particular components were not readily available in this country.

While on site, Ashby and his crew were made very aware of the FAA security policies for safety procedures while on airport property, and strict rules for gate access and to respect restricted areas.

“The whole time during construction we were under constant scrutiny and heightened security rules applied,” he said.  “We had to closely monitor all sub-contractors and workers while the building was prepped and built, even to the point of fencing off the building zone.  I understand the necessity of it, it being an airport and all.  Our guys did a great job.”