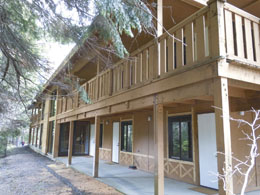 Nestled quietly in a forest of pines, Caldera, the dynamic arts education center at Suttle Lake, enjoys a privileged peace where its many artists, students and teachers gather to change and inspire lives through art.   And now the compound has added another jewel to its creative crown.

Caldera’s recent acquisition of land and buildings once belonging to the old Camp Davidson summer church camp necessitated a remodel of the 10,000 square foot main hall into a new conference center with great room and private bedrooms.  Re-named Tamarack Hall, its makeover was overseen and implemented by Allied Works Architecture of Portland and Chuck Newport and Paul Spezza of Construction Management Services in Sisters, both fruitful, long-time collaborators with Caldera and its founder, Dan Wieden.

“This was all owned by a Pentecostal Church who would rent it out to various religious groups over the years,” Newport said.  “It was closed just last year and vacant for six months before being purchased by Caldera.   This has been a private parcel surrounded by Forest Service land since the 1920s.  We started work on the property about a year ago.  Most of it was cleanup; fixing things broken and leaking, getting the water shut off and making sure things were secure. The Caldera organization first did some long-term planning to decide how to make it fit in with their mission, vision and values.”

The hall was originally staff housing for Camp Davidson with 28 rooms and a few shared shower/bathrooms in a practical, motel-type setup.   Newport and his crew completely gutted the interior and reconfigured the restrooms to eight individual bathrooms, and one unit meeting ADA standards.

With vision and foresight, Newport had already installed a state-of-the-art sewer system with room to accommodate added capacity with future expansion.  They also changed the interior heating to hydronic heat using a propane-fired boiler from the old, inefficient baseboard electric system.

“It was pretty much down to bare studs on the inside,” Newport recalls.  “We converted some of the existing rooms into a central great room with a fireplace and replaced all interior and exterior doors and windows.  Each bedroom was reappointed with Pacific Northwest style furniture and some open onto Link Creek right outside the door.   We extended the dimensions of the great room eight feet beyond the outside balcony and that really opened it up.   It turned out real nice. It’s all done with reclaimed Douglas fir, salvaged and laminated together.   We’re mostly finished except for the outside painting and repairs on a few cabins on the other side of the creek dedicated to summer staff.”

Caldera Founder and Board Chair Dan Wieden relaxed in the great room and composed thoughts on Tamarack Hall’s incredible transformation.

“The difference is amazing.   What once was very dark and institutional is now an inviting, comfortable space,” he said.  “Part of what we’re trying to do here is make this building a year-round site for conferences and programs that come from our insights on how people work and come together.  We’re interested in the kind of changes that come through the children and artists in residence here and how they’re affected.”

Wieden retains a deep belief in the transformational aspects of Caldera’s youth programs and wished to expand and reach out to grown-ups and families to see if that same effect could be transferred to them.  Their central mission is altering the lives of kids that are under-served, kids living in poverty and all kinds of challenging living conditions, building confidence and making them into productive citizens through the arts.

“At the end of the day, we’re not sure who is transforming who,” he proposed.  “I’ve never been so enriched in my life as I have been with these kids.  To me, the geography of the place, the caldera, holds you here and
centers you.”

Tricia Snell, executive director for Caldera explained the goals and purposes for Tamarack Hall and its productive future.

“The idea of a Transformation Camp is to bring interdisciplinary groups here to congregate and think,” she said.  “The first camp will be May 5-8 and will bring program directors of these non-profit groups together as well as specialists from many aspects of life –  business, entrepreneurial, neuro-scientists, designers and artists, people at the top of their game to see how we can improve our work at Caldera and connect more on a national level.”
Caldera Board Member Dan Heagerty complimented Newport and his team for the hall’s dramatic renovation with such simple alterations.

“If you’d seen it before, you never think it was possible,” he said.  “Chuck and his company are so well grounded in the community and he knows where the regional sources are for the materials used.  He brings that real local understanding to the project and knowledge of how to manifest the plan in nature.  The fit and finish of his work is incredible but so is the speed in which it was done.”

Eighteen months ago Caldera’s board of directors decided they wanted to rededicate themselves and focus more on education and Tamarack Hall will play a major roll in those plans.

“They realized if the kids of younger generations didn’t have a sense of place and stewardship of the land then it wouldn’t continue,” said Newport.  “Getting that perspective is so important.”

“We sit in the headwaters of the Metolius and a gold mine for a deeper understanding of what these water systems are all about,” said Heagerty.  “With the help of the U.S. Forest Service, we hope to retool and refine our outdoor programs to address the fundamentals of ecosystem science.  Kids will have access to the same database as the Forest Service and will be able to see how fish and invertebrates live and feel like they’re a part of the processes of nature.”

“Chuck knows our work and our kids and feeds that into the design.  The land out here, it makes me feels like a better person,” said Snell.  “I know many of the families who came here for summer camp over the years might be sad that it’s gone, but if they knew now how we’re serving kids through the arts, they may not feel so bad.”
www.calderaarts.org.