You are at:Home»News Pages»E-Headlines»Erickson Aero Tanker Taking Fire Suppression to the Next Level at Madras Airport
By CBN on January 29, 2013 E-Headlines 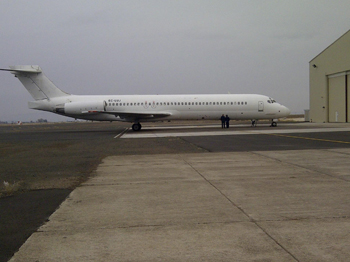 The first of what could be seven MD-87 jet engine aircraft landed at the last week. The larger aircraft will be refurbished to fight fires around the country with its home base in if an expected deal with the federal government is reached in February.

The first of what may be several jets used for fire suppression landed at the Madras Airport last week after a Hillsboro-based air tanker company purchased the assets and assumed the leasing rights from a Redmond company to fight fires in Oregon.

Erickson Aero Tanker, a subsidiary of Hillsboro, Oregon-based Aero Air, LLC, could have seven or more retrofitted commercial McDonnell Douglas MD-87 jet planes at the city-owned airport by the end of March depending on whether the company can sign a federal contract to base and maintain the larger jets in the next few weeks, said Glen Newton, air tanker operations manager for the company in Madras.

Landing multiple federal contracts could help the company create up to 50 or 60 new jobs at the airport over the next several years, said. Currently, there are six employees at the airport, including .

“We wouldn’t make this kind of capital investment if we weren’t pretty sure,” said of the opportunity to sign a federal contract to base fire prevention jet planes at the airport. “The jets are one of two that are approved for fire suppression on federal forestlands, he said. Three smaller Douglas DC-7 prop planes, which have been used to fight fires in from their bases in and , also were part of the deal.”

“The sale is huge for and could attract other aviation and fire suppression-related companies to the area,” said Janet Brown, manager of Economic Development for Central Oregon in .

“The Erickson Aero Tanker group will take aerial fire fighting to the next level,” Brown said. “Once you get someone of the Erickson group’s caliber, you attract other related companies. They’ve been around for a long time and they are a highly regarded company.”