You are at:Home»News Pages»E-Headlines»Central Oregon No Longer Area with Highest Level of Unemployment in State
By CBN on November 26, 2013 E-Headlines

After missing a month of employment statistics due to the federal government shutdown, October revealed significant progress in Central Oregon’s employment situation. The Bend MSA (Deschutes County) is no longer the metropolitan area in Oregon with the highest level of unemployment. October’s seasonally adjusted unemployment rate of 9.4 percent was just below the rate for the Medford MSA (9.5 percent). Crook County (12.1 percent) and Jefferson County (10.4 percent) each posted a significant drop in their seasonally adjusted unemployment rate from the summer months.

Hiring is up across the region with Crook County posting the second largest over-the-year growth rate of Oregon’s 36 counties (+5.8 percent). Deschutes County gained jobs at a faster rate than any other metropolitan area in Oregon (+3.4 percent).The national unemployment rate (7.3 percent) ticked up from September when it was 7.2 percent. Oregon dropped to 7.7 percent in October down from 7.8 in September.

Crook County: Crook County’s seasonally adjusted unemployment rate began to show significant progress this fall. The rate was 12.1 percent in October, which is considerably lower than the year-ago rate of 13.8 percent.

The county lost 60 jobs in October, which was fewer than the loss of 90 jobs expected this time of year. 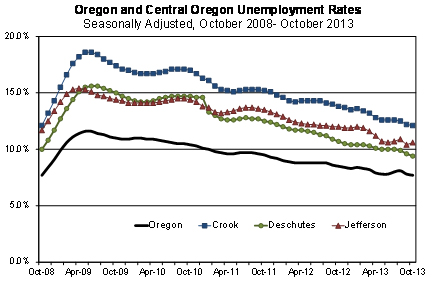 The private-sector shed 40 jobs in October, while government lost20 jobs. Seasonal decreases began in leisure and hospitality (-40) and construction (-10). Over-the-month gains were concentrated in professional and business services, which gained 20 jobs.

Crook County posted the second strongest over-the-year growth rate of Oregon’s 36 counties at 5.8 percent. All employment gains since October 2012 were in the private sector (+320). Job growth was spread across most industries in the County with small over-the-year losses in financial activities (-20) and mining and logging (-10). The largest gain was in transportation, warehousing, and utilities, which gained 80 jobs. Other industries with strong over-the-year gains included wholesale trade (+60); professional and business services (+50); construction (+40); and manufacturing (+40). Overall, there was no change in government employment over the past year.

Preliminary estimates from the federal Bureau of Labor Statistics (BLS) for the Bend metropolitan area show a decrease of 470 jobs in October. This represents a seasonally adjusted loss of 660 jobs.

Over-the-year, Deschutes County gained jobs at a faster pace than any other metro area in Oregon with employment up 3.4 percent from last October (+2,140). The vast majority of the over-the-year gains were in the private-sector. Notable gains were seen in mining, logging, and construction, the county’s fastest growing industry, up 9.2 percent from October 2012 (+330).

Jefferson County lost80 jobs in October when a loss of 60 jobs would typically be expected this time of year. The largest losses were seen in leisure and hospitality (-30); Indian tribal (-30); and manufacturing (-20). The majority of these losses are typical seasonal declines.

Over-the-year employment is up a modest 20 jobs. There were strong gains in manufacturing (+70), retail trade (+50), and leisure and hospitality (+50). Wholesale trade posted significant losses over-the-year, down 190 jobs from October 2012.

These estimates will be revised as new data from businesses becomes available. The next Central Oregon Employment Situation with preliminary data for November2013will be released on Monday, December23. 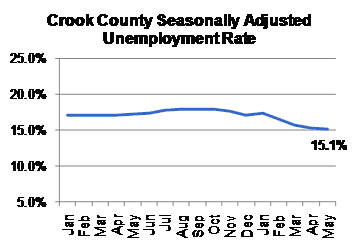 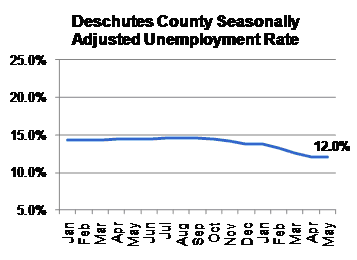 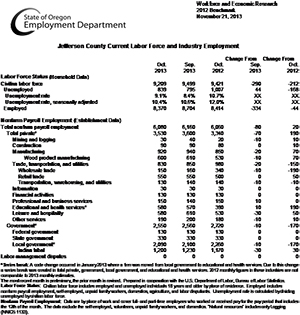