You are at:Home»News Pages»Healthcare»AirLink’s Team Approach to Strengthen & Expand Program
By KAREN SJOBLOM for AirLink on July 31, 2012 Healthcare 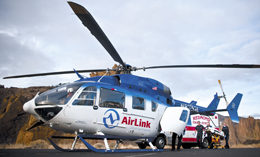 You know what they say about deep roots: They’ll keep you standing stronger long after the storm has passed. Such is the case with Bend-based AirLink; with an infusion of leadership alongside returning and new employees, the air ambulance that’s called Central Oregon home for nearly three decades is relying on its strong roots for future growth.

“We have highly educated, tremendously skilled medical professionals dedicated to growing the legacy of the program,” says William Baise, interim AirLink director. “We want to continue supporting the region, deepening our relationships with all Central and Eastern Oregon hospitals and enhancing the program; the long tenure of our staff makes that a lot easier.”

Since the program’s transfer of leadership on June 1, AirLink was able to rehire over three-quarters of the employees who were temporarily laid off while also adding 14 new team members, 11 of whom are local flight nurses and paramedics. Now, with nearly 50 experienced team members, AirLink touts an average clinical tenure of eight years, average pilot tenure of 11 years (helicopter) and ten years (fixed-wing) and an immaculate safety record over its 22,000-flight mission history.

“Ours was the first program in the state to become certified by the Commission on Accreditation of Medical Transport Systems (CAMTS), and our core, front-level care keeps improving year after year,” says Deidre Heinrich, RN, BSN, CFRN. “I’ve got 15 years with this program. I love this community and feel they built AirLink. We want them to have the best service possible.”

Part of that includes adding a paramedic on all flights alongside leading-edge neonatal care and blood transport capabilities. As a former flight paramedic himself, Baise understands the time-sensitivity of air transport.

“Since AirLink’s scene-response numbers are so great, we believed paramedics, who excel in pre-hospital care, would be a great addition to our team,” Baise explains. “Over two-thirds of our paramedics came from local fire departments with tremendous experience and knowledge of the area. Adding to our expert flight nurses and respiratory therapists, we’ve created an advanced team.”

AirLink continues to dig deep outside of the hangar as well, with long-tenured, supporting team members working behind the scenes to keep every facet of the program running smooth. One of these, Audra Green, has been the program’s Membership Database Coordinator since 1996.

“I believe in this program and support what it does,” Green relays. “With all the involvement and community support we’ve had over the years, I can only see it getting stronger.”

Adds Stacey Durden, AirLink’s business development manager, “The service has not skipped a beat. It’s the same service for the past 27 years, just stronger. The longevity of the crew is extensive, and we’re all invested in and are passionate about the communities we serve.”

Going deeper, growing stronger: AirLink is getting back to its community roots while keeping a keen eye on the future.