Business Oregon is the state’s economic development agency. Its mission is to invest in Oregon’s businesses, communities and people to promote a globally competitive, diverse and inclusive economy. One of its priorities — to grow small and middle-market businesses — is carried out by enhancing the competitiveness of traded sector businesses. Traded sector businesses sell their goods and services in markets outside the regional economy. For Business Oregon, that means outside of Oregon.

The traded sector is vital to the growth and development of economies because it provides jobs and wages that otherwise wouldn’t exist were it not for trade outside the region. Traded sector jobs are found in agriculture, forestry, manufacturing, wholesale trade, software, information technology, company management and certain business services.

The traded sector increases wealth in the region, wealth built from new money coming into the state, not just current dollars churning within the regional economy. The spending of this money leads to the creation of additional jobs in supply chain industries. Spending by these businesses and their employees then also leads to the creation of non-traded sector jobs in the economy. Non-traded sector jobs are primarily service jobs that can only be performed by the regional workforce. These jobs are found in health care, construction, education, hospitality, food service, retail trade and government.

Since traded sector companies have to compete with companies in other states and countries for sales, the competitiveness of these companies is paramount to their success. Consequently, the majority of innovation in the economy comes from the traded sector. Innovative products and services require an innovative and productive workforce.

Jobs in science, technology, engineering and mathematics (STEM), for example, are important to the growth and development of many traded sector industries. STEM jobs — and others in the traded sector — typically pay above average wages in the region, which is ultimately one of the outcomes economic development seeks: the creation and retention of high-paying jobs.

High wages and innovation in the traded sector ultimately leads to the creation of high value-added goods and services. This then impacts gross domestic product (GDP), the most widely used statistic to measure state and national economies. GDP is essentially the sum of value that is added in the production of goods and services in the economy.

Every region has its own unique mix of competitive traded sector industries. Business Oregon works with businesses across all traded sectors, but certain industry groups in Oregon have distinct competitive advantages that provide the state with notable opportunities for growth, high wage jobs, innovation, and statewide prosperity.

Each industry group has its own unique strengths. High Technology has the most exports and is the largest contributor to GDP. Outdoor Gear and Apparel has the highest average annual wage and highest ten-year employment growth rate. Forestry and Wood Products and Food and Beverages are twice as concentrated in rural Oregon than the rest of the state. Business Services is projected to grow the fastest over the next ten years. Within each Target Industry Group, subgroups provide further detail and opportunities. Emerging industries, shown in red in Figure 1, are fast-growing and gaining competitiveness in Oregon. 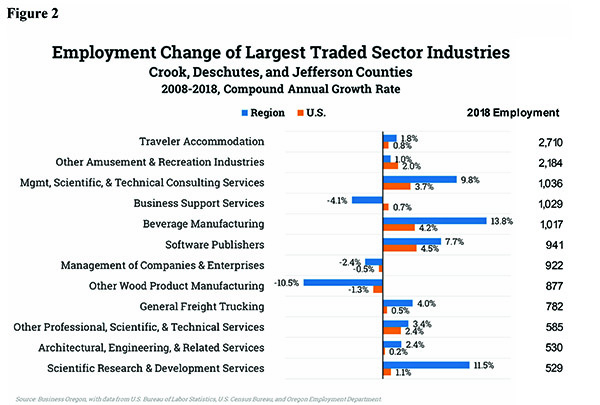 One way to analyze whether traded sector industries in regions are getting more or less competitive is to compare industry employment trends in the region to corresponding industry trends in the U.S. (Figure 2). The idea being that if an industry is growing faster locally than it is nationally, it’s become a bigger part of that industry, or increased its market share of that industry. This is a sign that an industry has become relatively more competitive.

The two goods-producing industries amongst the top traded sector industries in Central Oregon are beverage manufacturing and other wood product manufacturing. They could not be more different in their recent employment trends.

Beverage manufacturing employment grew at an amazing 13.8 percent annually since 2008, much faster than the national trend of 4.2 percent, a strong sign of gains in competitiveness. Meanwhile other wood product manufacturing employment declined by 10.5 percent annually, much worse than the national trend, a sign of weakening competitiveness. The transition of Central Oregon’s economy from boards to beers is a story most of us know well.

Industries in professional, scientific and technical services (consulting, architecture and engineering, scientific research and development and all other) have grown faster in Central Oregon than national industry trends, increasing competitiveness across the board. Competitive gains in these service industries is aided by Central Oregon’s high quality of life. Software and general freight trucking also saw strong gains in employment and competitiveness over the past ten years in the region.

Software’s success in the region is noteworthy given that, statewide, software has struggled to maintain competitiveness in Oregon. Wood products was not the only industry in Central Oregon to lose jobs and competitiveness since 2008. Management of companies and enterprise and business support services also lost jobs over the past ten years and experienced competitive declines. The two largest traded sector industries in the region — accommodation and recreation — are related to tourism, and combined they added jobs at rates similar to the U.S., with no significant gains or losses in competitiveness.

Central Oregon’s economy has performed well over the past ten years, and it has a diverse mix of traded sector industries to build upon. In particular, traded sector services will likely play a major role in the development and growth of the region’s economy for years to come.