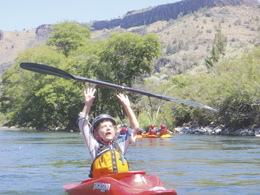 Tumalo Creek Kayak and Canoe has watched water sports in Bend boom over the past nine years; from their location on banks of the Deschutes River, owner Geoff Frank remembers when the only people using the Old Mill stretch of water were outrigger teams. Passing by the Deschutes today, you will see upwards of hundreds of people paddling kayaks, using stand up paddle boards (SUP) or floating in inner tubes.

Tumalo Creek has enjoyed introducing paddling sports to Bend’s population through the summer seasons, and has worked hard to provide a full range of services and products to attract all types of water lovers.

Tumalo Creek has previously been known as Alder Creek, a branch of the Portland boat shop by the same name. Frank opened as acting manager in 2000; when the Portland store went through a transition time five years ago, it gave Frank the opportunity to buy the company and shift it into a truly local shop. He states, “We changed the name last year because I wanted to represent that we are locally owned and here for the community.”

In March, Tumalo Creek introduced their new online store at http://store.tumalocreek.com. The project was the result of the winter down time, Frank states, “Gaining traffic to the online store is a learning process, we are trying to figure out the online game. It’s been nice to be able to ship stuff across the country; the no sales tax in Oregon has been attractive to buyers.” The online store offers a wide range of inventory and a knowledge base to help customers decide on the right purchase. The store offers a used boat section as well as apparel, safety equipment and an array of different kinds of boats.

Community is at the heart of the business and Tumalo Creek finds special interest in those organizations who are striving to protect our local and state lands and waterways. Frank and his company have been especially invested in the Bend Paddle Trail Alliance (BPTA) in their efforts to build a white water park/floating passage to the current site of the spillway under the Colorado Street bridge.

The spillway is a hazard for floaters and boats and has unfortunately resulted in a number of injuries and fatalities over the years. Originally built in 1915 to provide a mill pond for the lumber mills in the area, it has long since outlived it’s original purpose. The BPTA formed with a core group of paddlers from the area about six years ago with the purpose of creating a whitewater feature to replace the spillway.

Other communities across the country have successfully created whitewater parks, and the BPTA sees the potential to further transform the Old Mill, bringing in tourism and adding another recreational opportunity to a local economy which thrives on outdoor pursuits. The redesign of the spillway will feature two channels: one for those floating to safely pass through, and a middle channel that could potentially have four to five whitewater features. There will be a riparian zone as well to help revitalize the river habitat.

While the project has stalled in part due to the slowdown in the economy, paddlers are hopeful that the end result is in sight. Bend Parks & Rec has taken over control of the project, but the BPTA is still very involved. Tumalo Creek continues to help raise money for the whitewater park with their Pickin’ and Paddlin’ series the last Wednesday of the summer months.

From the sale of $10 pint glasses, proceeds go to BPTA’s efforts which have also expanded to include creating a local paddle trail, maps, guides and the recent success of helping to raise funds for the purchase of Miller’s Landing. The Trust for Public Lands headed up the Miller’s Landing acquisition which will play a pivotal part in the Colorado Bridge project as it lies just downstream of the spillway.

The final engineering study will be available this October and Frank is hopeful that the forward momentum the BPTA and Robin Laughlin, Bend Parks and Rec Project Manager, felt in the Miller’s Landing project will help to push the whitewater park forward.

Tumalo Creek offers a variety of classes and rentals throughout the summer. Water lovers can brush up on basic kayaking skills, canoeing or paddleboarding. A variety of classes are offered for kids, and the kayak and canoe tours explore a variety of local rivers and waterways. The monthly kayak club takes boaters through a progression of skills with the goal of taking boating abilities up to another level. The classes traditionally see 40-60 participates each week, and most lessons occur in the evening after the brunt of floaters have drifted past the shop. A weekly SUP race series has attracted attention and offers those with a competitive streak a chance to try out racing.

As water sports are often a seasonal experience, the shop goes into hibernation during the cold months. This has provided Frank and his winter crew a time to evaluate how the past season went, work on projects such as the online store and make plans of improvement for the next year. Frank would like to grow his program area and is doing research into offering more destination paddling experiences for customers. Winter also means chasing powder instead of waves, and Frank wouldn’t have it any other way having discovered how to truly live the Bend lifestyle.

The Pickin’ & Paddlin’ event will hold two more shows before the weather turns the corner. All events offer free boat demos starting at 4pm followed by music and dancing. The August 31 performance will feature the Moon Mountain Ramblers, and September 21 will be the bluegrass group Blackstrap.