You are at:Home»News Pages»E-Headlines»How Your Business Can Save Money On Electricity Bills With Solar Installations?
By CBN on July 2, 2019 E-Headlines

The origins of solar panels go way back, 1839 to be specific. A scientist discovered that electricity could be generated from placing two metallic electrodes in a conductive solution under the exposure of light. Some research and development happened, but it wasn’t efficient enough to be used practically. In 1953, 3 telecommunication scientists managed to create a silicon cell. This was the first cell that was efficient and capable enough to power small devices. A few years later, solar cells were available on a wider scale, yet it wasn’t common for businesses or people to be able to afford it, the cost was way too high and traditional energy sources were much cheaper. Solar cell research peaked thanks to the space race between the US and the Soviets; in the late 60s, solar power was standardized as the main energy source in powering satellites. As it developed further, it was used in railroad crossings, remote homes, and even microwave towers.

The world has recognized the importance of solar energy, a lot of money and effort has been poured into the research and development of solar cells, and it’s working. We can now see solar-powered cars, aircraft, homes, and businesses. Adopting solar panels is basically hitting two birds with one stone, the obvious first reason is that it’s very cost-effective, the second one may be a long-term and a collective resolution, it’s for humanity’s benefit. If you’re a business, then you should feel lucky that you’re in an era that makes solar installations a possibility to reduce costs and save the environment. We’ll be giving you a brief overview of how going solar is going to be one of the best decisions you’ll ever make.

Sustainability and being able to address the market as a green business is an advantage indeed, but that isn’t the first thing on most businesses’ minds. Going solar was always related to cutting energy costs and for a good reason. The significance of converting to solar should never be underestimated; commercial property owners can expect a reduction of energy bills that could reach up to 75%. Some businesses that used to pay $2,000 in electricity bills are now just paying $500.

Some businesses find the initial investment in installation way above what they’re ready to invest. Before buying solar panels, you should know that the savings are projected over a long-term duration, so making the investment without bearing that in mind can leave you stranded. To resolve that issue, a Power Purchase Agreement can be made. In simpler terms, a solar energy provider can agree to supply solar energy to a buyer without having to install solar panels at the commercial/personal property. A contract is made to guarantee a certain level of quality, rate, and delivery points. This is still a cheaper option than paying for traditional energy sources, it can also give you the chance to save money and do a complete solar installation after a while.

Solar providers used to only be able to serve big corporations because the scale of the solar installation was big and there were no other options that could accommodate small to medium businesses, which comprise most of the businesses in Australia. Once providers developed and innovated new ways to scale down their services, using solar for business in Perth and other cities filled with small and medium businesses became a viable option. Having a huge rooftop to install big solar panels on isn’t a necessity anymore, innovation and research led to the creation of small yet very efficient solar panels that can be installed on most rooftops. The cost of these small solar panels is surprisingly lower than their big counterparts; they are less to manufacture and take less time to be installed which reduces the overall costs of installation.

Research reports that most businesses that installed solar cells were able to pay off the overall cost of purchasing the cells and their installation in 3 to 7 years. What makes going solar a very tempting choice for businesses, especially big corporations, is that once the last installment is paid off, they get to enjoy 25 to 35 years of completely free electric supply. You can think about the investment in solar energy as pre paying electricity bills about 30 years in the future for an extremely reduced cost.

The low cost of maintenance is also a strong point for going solar, as the system is stationary with no moving parts. Solar panels have a certain life expectancy, this life expectancy is more accurate than you’d think. As long as the solar panels aren’t in an area with a lot of natural disturbances like storms, bolts of lightning, or fires, you should expect to pay almost nothing in terms of maintenance. 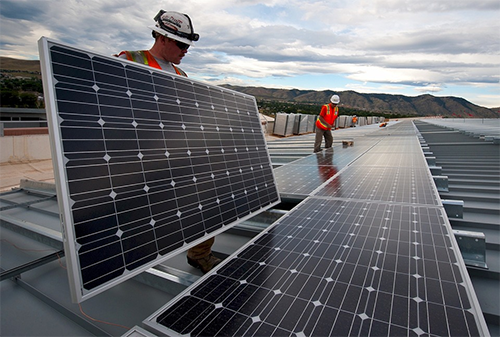 As businesses start shifting towards a greener environment, going solar is an effective statement. Using clean and sustainable electricity not only saves you money that can be used in different directions, but it can also be a strong marketable point to the public. It shows that your company is being environmentally responsible, demonstrating to your clients that you’re not all about profit. This is going to have a positive impact on stakeholders and your local community. This gives your small or medium business some buzz and can help it grow further with the support of the community, in addition to forming business relations that can also help you save costs.

The direction the world is going right now favors any environmental and green outlook, especially when it comes to businesses as the industrial scale is directly related to the health of the environment. Technology has led to solar screens infused with organic dye and nanoparticles, solar fabrics that can be placed anywhere, and solar shingles that look very elegant and minimal. When it comes to the renewable energy field, especially solar energy, there is no shortage of innovation and development aided by the approval of the community to help businesses save more money while helping the environment.