You are at:Home»News Pages»E-Headlines»Bend Entrepreneurs Registered More Businesses per Capita than any Other Large City in Oregon in 2017
By CBN on January 11, 2018 E-Headlines

“You know that thing about Bend being an entrepreneurial city? It is. Big time. There was one 2017 business registration in Bend for every 28 residents. In other words, walk down your street and chances are someone and probably multiple someone’s on your street registered a business in 2017,” attorney Jeff Eager said.

The next closest among cities with populations over 30,000 (the numbers get wonky below that population) is Lake Oswego, with one business registration for every 30 residents. Lake Oswego is a wealthy suburb of Portland. 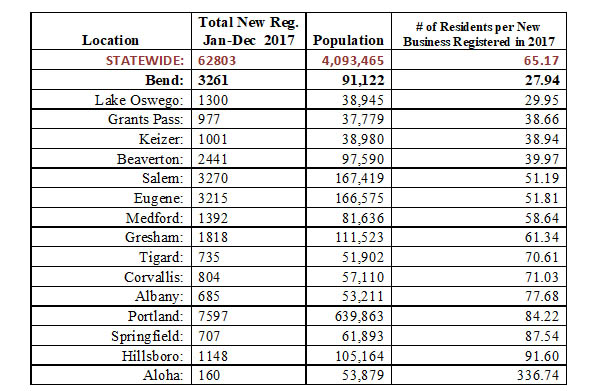 “Maybe not surprisingly, entrepreneurs registered more Bend businesses when most folks are working, and not during the summer or the holiday season. The biggest months were March, January, October and May. The slowest were August, November and July,” Eager said.

In general, registrations were strongest at the beginning of the year and, aside from a big month of October, slower in the latter half of the year. See table below.

“With a year of data under our belts, we’ll be able to compare monthly 2018 data with that from 2017. Will the rapid rate of business registration in Bend continue in 2018? It may be that factors such as a tight labor market and limited commercial and industrial space in Bend force a slowdown in registrations. On the other hand, nationally small business and consumer optimism are high,” Eager said.

EagerLaw will release data from January 2018 in early February.