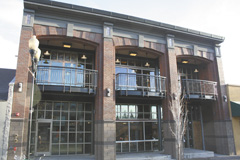 A fresh landmark has been served up in downtown Bend with the major expansion of Deschutes Brewery’s Bond Street Public House, together with an extensive makeover of the original iconic premises.

The brew pub has been a staple downtown since its inception in 1988, when it was the original brewery location, becoming a favorite gathering place for local beer fans and a steady stream of visitors sampling Deschutes’ world-famous ales and gastronomic delights.

But as the door-busting weekend lines for the restaurant testified, pressure has been building on the old 5,600 square foot space, before the ‘planets aligned’ to pave the way for an expansion into the adjoining, formerly vacant, lot to the south owned by developer Doug Knight – who is also responsible for other successful projects in the city core such as the mixed-use St Clair Place building on the corner of Bond and Minnesota.

What has emerged in the shape of the new space is already being hailed as a pristine addition to the city’s architectural landscape, featuring a brick façade with a beautiful arcade of three towering two-story segmented arches, giving instant historic appeal.

Inset from the arches is an innovative more contemporary curtain wall of floor to ceiling glass, which can be almost entirely opened up to the street, European-style, when the temperature climbs.

The addition, with an address of 1030 NW Bond, encompasses two stories, including outdoor balcony seating with mountain views and a wood-paneled banquet room on the second floor, which is accessed by a wide timber and iron rail staircase.

The ground level focal point is a state-of-the-art ‘exhibition kitchen’ where diners in the expansive new seating area can see the chef team in action in an integrated atmosphere.

Another prominent feature is the facing wall to the south that is finely crafted to replicate the indigenous tuff stone of the adjoining building – evocative of the local volcanic geology – uncovered on the site pre-construction.

Meanwhile, the 23-year-old brewpub birthplace at 1044 Bond has benefitted from an extreme makeover, including an expanded reception area, bar and server stations. The former backroom culinary hub has been halved in size and converted to a prep kitchen, incorporating a bakery and “charcuterie” with prepared cured meat products displayed in delicatessen-style cabinetry.

The updated facilities will allow head Chef Matt Nelter to expand his repertoire of continuing to use the finest ingredients, with a synergistic emphasis on predominantly locally-sourced fresh and handcrafted products complementing the beverage excellence and building on the philosophy of everything possible, including sausage, breads and mustard, being made on premise. Even patrons’ burgers come from local livestock partially raised on feed recycled from the brewing process.

Other updates at 1044 Bond include a lowered partial wall – which traditionally buffered the bar and restaurant area – now fully surrounded by a copper countertop, barstool-height tables to the north, a continuation of exposed brick and wood paneling, and a relocation of the fireplace from the reception block to a spot next to the prep-kitchen.

The new chapter symbolically began with a bang – literally – at the onset of the year when a packed house thronged ‘Locals Night’ on January 2 to see Deschutes Brewery owner Gary Fish wield a sledgehammer and smash down the south wall that is now the arched passageway connecting to the new expanded space.

After closing time the operation was temporarily shut down and construction crews swarmed the premises, with general contractor SunWest Builders working on a fast track to complete the transformation by the end

He added, “The new facility represents the brand and beer well and, for example, the much more capable kitchen allows us to up our game in terms of food, in a similar way to what we

“The opening of the kitchen space also furthers the engagement process with our customers and allows interaction and connection to the manufacturing process.

“But also we are cognizant that people were comfortable with the pub and we wanted to continue many of the familiar components of the design.

“We really had an A-team all round on this project, in everyone from Doug who is a great innovative partner as owner, to DKA Architecture who helped translate the vision, and SunWest Builders, who are top-notch construction and remodel experts.

“It has been an exemplary collaborative effort with input from many stakeholders, and our Food and Beverage Director Mike Cooper has effectively quarterbacked much of the process on our behalf.

“I have been negotiating on this property for 20 years but the numbers never worked before. We were finally able to agree a deal that makes sense and are happy to be here.

“We are seeing a new energy about the place and anticipate it being a huge positive force for downtown Bend.”

The subtle improvements in the pub ambience include acoustical panels above ceiling slats and strategic placement of carpeting to abate noise levels while still retaining a spacious vibrant atmosphere.

Architect John Kvapil, of DKA, said attention to detail and team spirit was a true hallmark of the project, even extending to Fish’s tour of hostelries in the UK inspiring the historic pub feel in the patina of the banquet room.

He added: “When Deschutes came on board, Gary and Mike didn’t want there to seem a significant departure from the original pub and the starting point was that the choice of colors, textures and materials should be harmonious.

“The idea was that we just pushed through the wall and found this historic vault-like building there all along.

“We also wove in contemporary touches such as the iron work, and all the craftsman involved realized this was somewhat history in the making and poured their hearts into the work.

“There was a degree of complexity to the project and a tight schedule, but everyone was involved in the creative process and teamwork was a key component, including having the owners sitting right next to us and

“Everyone wanted to go to the next level, which is one of the reasons Deschutes Brewery is internationally renowned, and the space reflects that dedication to quality.”

Knight, who is a licensed civil engineer with a highly-developed aesthetic sensibility, had a major influence on the exterior look of the new building as part of the design-build team. He said, “With 1030 Bond we wanted something that had a community element and are very excited to be partnering with Deschutes.

“The expansion is great news for downtown and even better for the Bend community, and serves as something of a beacon of optimism

“I think the building has a wonderful presence with a mix of historic and contemporary references and the exterior has a look of the stately central utility plants of old, but with a modern twist.

“We have built value where there was none, and it was fantastic to work with such a talented team on a project that took vision and courage to bring to fruition.”

SunWest Builders Project Manager Mark Maxwell said one of the challenges of the project was the condensed schedule, particularly on the remodel side, adding, “The pub was closed at 11pm on January 2 and we literally went in at midnight to start work.

“Many of the improvements may not be immediately obvious, but serve to enhance the function as well as the visual aspect of operations, including new equipment behind the bar.

“The project featured a rich mix of materials including wood which was mostly salvaged, metal and masonry, and when you drive downtown the building has a substantial look of historic value.

“Also, a unique contemporary feature is the inset aluminum-framed glass curtain wall which can be folded away to small compartments to create a patio atmosphere. The only other one of its type in the North West is at Reser Stadium where the Players’ Lounge can be opened up to the field.

“There was a lot of collaboration and pride in the project, which has been a prime example of team effort, and I think this is going to be landmark downtown which the public will truly appreciate.”

The expanded brewpub operation is expected to officially open during the last week of January 2012.