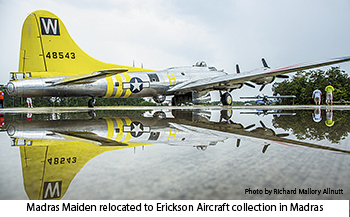 Jack Erickson’s antique airplanes are rated as one of the top five collections in the world and will soon be ready for public view showcased for all of Central Oregon and beyond. The new Erickson Air Collection facility in Jefferson County is being filled with one of the finest flying collections of historic aircraft currently available. Previously exhibited in the Tillamook Naval Air Station Museum, Erickson’s collection of 20 to 22 vintage war aircraft needed a new home.

Now completed the beautiful new 65,000 square foot structure soars beautifully above the Jefferson County landscape with the scenic Cascades as a backdrop and boasts an arched radius roof center span in balance with the shed style construction. On the top east front side of the building is a large bank of translucent windows pouring in volumes of natural light.

The large open space is expansive, perfect for viewing these vintage aircraft. The huge square footage will be ample space even when it is filled with the large collection. The finish work on the interior is sleek with subtle colors and  brightly illuminated. Other inside details include a  sealed concrete floor, extensive fire prevention systems and interior space heaters and fans to keep the building comfortable year around. The building has three large hanger doors. The center doors are on rails at 120 feet wide with two smaller hydraulic doors on each side.

Steele Associates Architects President Scott Steele remarks, “We’d like to thank Erickson once again for selecting us to design their new facility. They were an absolute pleasure to work with and the project, with all the beautiful aircraft, was very interesting and exciting. We’re also thankful to Erickson for selecting Central Oregon for their new location.

Their presence in Madras will help build and stabilize our economy, strengthen our aviation industry as we feel this facility will catalyze more development and interest at the airport and Jefferson County.” Steele compliments the rest of the architectural building team for the success of the project: Steve Hockman, Adam Stephen, Summer Oman and Civil Engineer, Hickman Williams and Structural Engineer, Froehlich Consulting Engineers.

The building creates an inviting look from all points and will be a great attraction for Central Oregon and airplane buffs nationwide. Meeuwsen continues, “When it is turned into a museum there will be a welcoming area, gift shop, restrooms and visitor information when entering the building.” The building is sited to benefit from the scenery of the majestic Cascade peaks. Steele comments, “When the center door is open Mt. Jefferson is perfectly framed in the backdrop.”

Keeping projects of this scale on track can be complex but other than one harsh winter storm the project has stayed very close to its original construction schedule. Kenny Rice, project superintendent with CS Construction, says, “One of the biggest challenges was pouring the massive nine inch thick concrete floor in the winter. There were several 500 yard pours and our timing was just right to avoid the cold weather avoiding significant delays.

The week we had 27 inches of snow with no roof on held us back and it took quite a bit of work for the week just to get the snow off the concrete slab. “Once that was over we have been able to keep pretty close to the schedule and expect to receive the final inspection very soon.” Steele comments, “CS Construction has done a fine job putting the project together and has worked diligently through some harsh construction weather to stay on schedule.”

Another challenge for a facility to exhibit such large airplanes is to have as much free span as possible. Steele remarks, “We worked closely with Erickson’s design requirements to understand what was needed for the museum so the engineers compute what size the steel needs to be for the building to have the free span space, then it is manufactured to those specs. The free span in this building is created with the custom roof and large shed wings on each side.”

This project created significant installation challenges especially the arched roof spans that were met by building innovation from CS Construction. Rather than workers fitting complex roofing support beams dangerously high off the ground the roof spans were first assembled on the ground and were then lifted into place with a large two hundred ton crane. Rice reports, “The crane worked great but we did have to be careful if the wind was over 8mph we had to shut down the operation.” Meeuwsen adds, “We got blown out a lot on this project, not only on the roof but the siding as well. In order to complete this we needed the biggest crane available on this side of the mountains.”

THE MOVE TO MADRAS

The process to building the new facility in Madras evolved over several years as the Erickson Group evaluated the high maintenance costs, the corroding coastal weather and the oversized historic blimp structure in Tillamook, Oregon. Knowing their lease was due to expire in 2016 they began to consider new locations in Tillamook, Newport and Astoria. These cities eagerly invited Erickson to develop a museum in their respective towns and several state grants were issued to develop sites and encourage them to move.

However the direction to a new location changed when Jack Erickson, owner of Erickson Aero Tanker and  chair of Precision Conversions LLC, a related entity to The Erickson Group, purchased a global fire fighting air-tanker operation with the fleet based in Madras in 2013. With cooperation from the airport, EDCO, City of Madras and Jefferson County planners, Erickson chose the Madras Airport as the perfect location for the museum.

EDCO manager for Jefferson County Janet Brown remarks, “Our new shining star in 2013 was Erickson Aero Tanker…having Erickson’s war birds in Madras is exciting and will be a huge attraction for history and airplane buffs. Having someone the caliber of The Erickson Group building their newest company in Madras is super and with the Erickson aircraft collection here, it’s just icing on the cake. They are great community partners and have used local supplies and talent in their development and expansions.”

Erickson is an internationally recognized entrepreneur who started and successfully built numerous companies and industries founding Erickson Air-Crane in 1971. Since then he has focused his attention on the development of The Erickson Group, utilizing  his extensive experience in the aviation and forest products industries and has been active in the founding and the expansion of the Tillamook Naval Air Station Museum.

Erickson originally moved his planes into the Tillamook Port’s blimp hangar in 1994 growing his collection along the way. The former museum in Tillamook is in the historic World War II blimp hangar and it is feeling its age. Originally built  large enough to store up to eight blimps each 250 feet long the hanger is larger than six football fields built nearly 15 stories high.  Add the moist damp salt air of the Pacific Ocean and you have a high maintenance stressful environment for metal airplane components.

Mike Oliver, manager of the Erickson Air Collection formerly the Tillamook Air Museum, says, “Since this collection of aircraft is active it creates a monumental maintenance task. One of the things about our museum is it is a flying museum, most museums pickle the engine — they’re just static displays. Our planes fly. Our airplanes are hand-picked and the collection has a lot of rare airplanes.”

The Airshow of the Cascades scheduled for August 22-23 for 2014 will certainly benefit from the new Air Museum.  Recent years have brought approximately 10,000 spectators to the Airshow and higher visitation is expected this year with the vintage aircraft that will be on display. Along with the 20-22 planes there will be one of the most prized planes of Erickson’s collection, his B-17G Flying Fortress a World War II Bomber.

In the historic past of these unique aircraft was the fact that crews often named their planes with female characters and painted Pin-Up graphics on the nose of the plane. Such was the case for Erickson’s B-17G which was formerly named “Chuckie” after the previous owner’s wife.

But once the plane was sold to Erickson with the plans set to move to Madras a different idea was born. History tells us that Madras served as a primary training base for B-17 crews during WW II, and since Erickson’s new bomber would be moving to Madras it would be a good time to re-name the plane and it could also be a fitting tribute to those that trained there and served in the war. This resonates well with a plan to build a World War II Veterans’ Memorial that is under construction. All parties concerned agreed and this summer noted aviation artist and nose-art historian, Gary Velasco, will travel out to Madras to paint the new name and Pin-Up artwork Madras Maiden on the B-17′s fuselage.

Warbirds News reports, “Madras Maiden will be a flying representative for the community of Madras, Oregon and the Erickson Aircraft Collection while touring the Pacific Northwest and visiting regional air shows and other aviation museums. Jack Erickson and his museum manager Mike Oliver both agreed that the new name made sense. Community Leaders in Madras, Oregon have also embraced the idea as well, and have even gone so far as to donate $5,000 towards the new nose-art.”

Madras is feeling positive about the Erickson Air Collection Facility. Mayor Melanie Widmer commented, “The Erickson Air people were fantastic to work with. We felt like it was a little bit of a long shot when we first met with them, but fortunately for all concerned it panned out really well, and it’s been really exciting especially to watch as these aircraft have been coming in these past weeks making it feel like it has really happened.”