You are at:Home»News Pages»E-Headlines»Alexander Payne Dishes on His Successful Writing Partnership with Jim Taylor.
By CBN on December 22, 2021 E-Headlines

Jim Taylor co-wrote five of the seven feature films that Alexander Payne has directed. Their partnership is successful by Hollywood standards and beyond. Both men won the Best Adapted Screenplay Academy Award for Sideways in 2005, and their films have grossed nearly $500 million worldwide. Payne, 60, considers himself lucky to have that kind of connection with Taylor. “I’ve been very fortunate to work with excellent talent in my career,” says Payne. “Working with Jim is always a peak experience.  We both feel very, very lucky to have found each other.”

From Roommates to Academy Award-Winning Filmmakers

It was one of those classic Hollywood chance encounters that brought Payne and Taylor together. “In 1989, Alexander had a two-bedroom apartment and was looking to rent out one of those bedrooms,” Taylor has recalled. “We were just acquaintances, but I moved into that room, and we became friends and started writing together.”

Taylor doesn’t mind that Payne tends to garner more attention from the press and general public because of their films. “He pays the price for that. I’m not envious of all the interviews he has to do and the fact his face is recognized more. Everywhere he goes, people want something from him. That level of celebrity I’m not really interested in,” he has said. 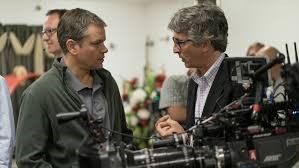 The men have learned that there is no place for ego when it comes to working together on a script. ​”I think it’s because both of us are interested in making a good movie more than having our own ideas validated,” says Taylor. “So we can, hopefully, set our egos aside when we’re working and say, ‘Oh, that’s a good idea,’ or, ‘That’s a better idea.’ I think many writing teams split up because they’re too concerned about protecting what they did instead of remembering what’s good for the script. We can work out disagreements without having any fallout from it. It’s funny. I mean, sometimes we do act like a married couple. There are negotiations to be made. But mostly, we just get along and enjoy working together. I think our shared sensibilities are similar enough that if I can make him laugh or he can make me laugh, then we feel like we’re on the right track.”

How Alexander Payne and Jim Taylor Perfect Their Process

“We’re extremely fortunate to be writing partners,” says Payne.  “Jim and I have a very specific process.” So what exactly does their process look like? “Well, the basic rule of thumb is that a screenplay, whether it be an original or an adaptation, takes about six months to complete,” Payne says. “We’re like two lobes of the same brain. When I’m writing with Jim, it’s as though we meet each other in the middle. We talk about what’s going to happen next. And then one or the other of us will get on the computer and knock out two, three, four pages.”

What happens after that? “I invite Jim to come read what I wrote, or he lets me read what he wrote, and then we rewrite it together,” Payne explains. “We typically have one monitor with two keyboards. When we’re writing, we are pretending that we don’t have to think about the budget. I’d rather let the restrictions come later in the filming process, although typically our movies tend to be on a smaller, human scale.”

According to Payne, they discuss the actions, conflicts, motivations, and how to shape the dialogue. “Sometimes the person on the keyboard is not doing the creative work,” explains Taylor. “Alexander might be inputting what I’m saying. We’re switching back and forth, taking turns being the editor.” 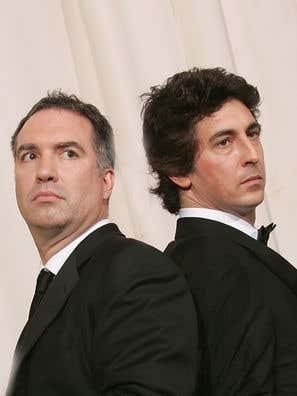 Of course, for a perfectionist like Payne, the script is never entirely finished. “Sure, we keep tinkering with it until the shoot and even during shooting,” he admits. And even though they’ve won Golden Globe awards and Academy Awards, they’re never completely confident about the next project. “We’re doing really well, but we don’t want to feel secure,” says Taylor.

No matter the genre they’re writing, they strive for authenticity, realism and ready identification between the audience and the characters. Payne says, “Since early in our careers, for some reason, Jim and I have been attracted to protagonists who are unfulfilled or have lost control of their lives. To us, they are relatable comic figures.”

Neither Payne nor Taylor is interested in creating stories that seem fake or contrived. “I think it’s true of all the characters we write — there’s this mixture of things in people. Straight-ahead heroes are just really boring to us because they don’t really exist,” said Taylor. “I think once we fall in love with the characters, then it’s really just about them. We have – all writers do — the best time writing when the characters are alive enough  to lead us somewhere, and we’re not trying consciously to write about theme.  We trust that good themes are baked into a well-told, realistic story. ”