Whether by chance or causality, election years tend to carry with them generally more optimism than the years that follow. For the economy, election years tend to be characterized by a “steady as she goes” pace rather than riding big waves of growth or floundering in economic shocks. And then there is always the business cycle, and we tend to pay much more attention to the trends there as a barometer of the economy than what is happening on the political landscape. Add to that the impact of different business cycles, region by region across the globe and their impact on the U.S. economy, and analysis gets a bit trickier.
Combine all these factors and we think it is very likely that 2016 will look a great deal like 2015 — both for the U.S. and Oregon — except better. We expect to see solid economic growth, but not in the stratosphere, which can lead to a boom and bust scenario. New records will be set for employment in the tri-county area, and there will be fewer jobless residents, despite the fact that in Deschutes County alone, we are seeing on average 200-300 new residents each month. For EDCO, in-migration (new people moving in) represents an ongoing challenge for businesses to keep pace in new job creation. And despite what you may read, we’ve been “out-boxing our weight” in the area of job creation for some time (see Chart A).
Central Oregon Economy 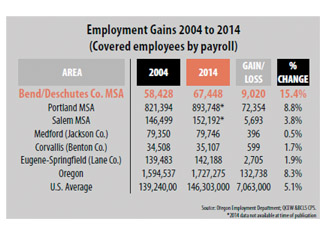 In the third quarter of 2015, the Milken Institute released its list of top performing large and small metros in the U.S. The Bend/Redmond (Deschutes County) MSA was ranked #8 among 201 small cities. Industry diversification, wage growth, overall job growth, and employment gains in technology sectors formed the basis for the comparison. Given what’s happened over the past year (from which next year’s ranking will be based), we could see our ranking improve in 2016. 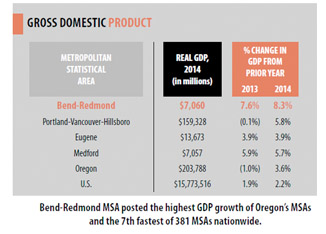 Regional experts are also singing the same tune. University of Oregon’s Tim Duy tracks the state and regional economies overall by indices, and Central Oregon is ahead of the pack. Oregon’s Office of Economic Analysis has taken notice of (with surprise) the remarkable economic renaissance in our region from the devastating “Great Recession.” But a flourishing regional economy did not “just happen.” Many
people, businesses and organizations have helped make it so.
EDCO’s Work to Change the Regional Economy
EDCO, a small private non-profit, has the charge of positively influencing and changing (diversifying) the region’s $7 billion a year economy. We focus our limited resources on what economic development professionals call traded-sector employers (those that export most of their goods or services outside the region). To do this most effectively, we operate six offices in the tri-county area in an effort to see job growth and diversification across the entire region – from our biggest city to the smallest town. We set aggressive three-year goals and vigorously track both effort and results quarterly. In fact, EDCO just ended its 2013-15 planning horizon and is about to release its strategic plan for the 2016-18 period. Here’s a highlight of our efforts over the past 36 months to “move the needle” for our part of the state.

These results only include direct jobs from the companies EDCO is working to help. It does not include all the indirect jobs from construction, suppliers, retail, and
commercial activities that inherently come with traded-sector jobs. For MOVE and GROW, it also only includes capital investments subject to property taxes – not payroll, rent or other operational expenses. We are proud of these results. More than $500 million injected into the region’s tax base, 124 completed projects and more than 1,700 new, well -paying jobs. What’s well paying? The average wage per job, across all projects we’ve worked on, exceeded $50,000. For a number of companies, the average wage is more than $100,000. That’s good news for Central Oregon families and businesses.
The pipeline of pending projects (companies) that EDCO expects to make investment or location decisions in 2016 is strong. We are currently in the final stages with 174 companies that collectively would create nearly 2,000 new jobs and invest $2.1 billion in new capital investment in the tri-county area. Industries represented in this portfolio of firms include: advanced manufacturing, aviation/aerospace, bioscience, brewing and distilling, outdoor equipment and apparel, software, data warehousing, and food processing. Not all of these projects will come to fruition in the year ahead, but we are confident that a significant number will. These successes will continue the quiet diversification that is, slowly but surely, transforming our local and regional economy.
Wild Card – Oregon’s Business Climate
On the horizon this year are a set of legislative policies and ballot measures that could have a significant negative impact to economic development efforts in Oregon. It will start this month with the short legislative session in Salem and an agenda to politically raise Oregon’s minimum wage. Increasing average wages of our region’s residents is at the core of EDCO’s mission, but via the political process. Rather, we do this by working with employersto help make them more competitive, profitable and to better engage all their employees in the entire business process.
We also strive toward this goal by developing industries that pay, on average, higher wages – such as those noted above. Aggressively and arbitrarily increasing the minimum wage, what we prefer to call the “entry level” wage, will have the effect of increasing unemployment, boosting inflation locally (if entry level workers now paid more, most existing employees will also expect raises), and perhaps worst of all, exacerbating the downward labor participation rate among our emerging workforce (ages 17-24).
It could also put Oregon in the national limelight (and not in a way that is helpful for company recruitment/growth) as the state with the highest minimum wage by a 20-40 percent margin. If approved, this will impact EDCO’s efforts and ability to move, start or grow companies in our region.

Oregon’s initiative system, one that has an extraordinarily low barrier to entry, will also test our business climate. Again. By now, many of you have probably heard of IP28, the proposed ballot measure that would impose a 2.5 percent gross receipts tax on Oregon C-corps with revenues of $25 million or greater. A gross receipts tax is one imposed on revenues, not profits, which means that some companies could see anywhere from a 25 percent-500 percent effective increase in the taxes they pay here.
For larger, more established companies (power, natural gas, banking, grocery stores, fuel) these added costs will passed on to the consumer in the form of higher prices (hidden sales tax).
For smaller companies, especially those that don’t have to operate in Oregon but choose to do so, it could well be the tipping point that causes them to leave our state. Although a large, high profile company, GE’s recent corporate HQ exodus from Connecticut to Massachusetts is a perfect example.
There are a number of additional ballot measures in the works that, if passed, would further undermine economic development work across the state. One is focused on creating the highest state personal income tax rates in the country, while two others seek to raise the minimum wage, regardless what happens in the short legislative session.
With so many crucial decisions regarding Oregon’s business climate falling squarely on the shoulders of Oregon voters, as opposed to elected representatives, there are indeed a great number of unknowns for the Oregon and Central Oregon economy as 2017 approaches.
Roger J. Lee, Executive Director, EDCO, Office: 541-388-3236, Mobile: 541-390-8989, www.edcoinfo.com