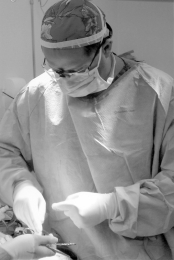 State of the art healthcare as we have here in Central Oregon is possible because of highly trained and experienced health care providers.Having a tertiary facility like St. Charles Medical Center helps, but ultimately the physicians determine the quality of health care. Specialists that have trained in some of the best medical facilities this country has to offer are drawn to Central Oregon for the same reasons we all are – quality of life. Which means that our small town of approximately 70,000 has a quality of care that rivals major metropolitan areas.

One young doctor that is at the forefront of his specialty is Dr. Darren Kowalski, MD, FACS, a general surgeon with Bend Memorial Clinic. Dr. Kowalski has been in Bend for 6 years, moving here with his wife, Sara, after his training at the University of Iowa Hospitals and Clinics. He is an Oregon native who spent his childhood on the coast in Neskowin, attended Oregon State University for his undergraduate degree and Oregon Health Science University for medical school.

Although general surgery sounds vague in this world of highly specialized specialists, general surgery is where all surgical procedures began. Designated specialties are only a fairly recent phenomenon, becoming common in the early part of the 20th century. General surgeons are just as the name infers, they know how to operate on all parts of the body. But just as all other areas of medicine are becoming more specialized, so is general surgery.

Dr. Kowalski’s areas of interest lay in benign and malignant diseases of the breast, and colon and rectal surgery. For colon resections (partial or complete removal of the colon), Dr. Kowalski uses his experience with the advanced technology of laparoscopic surgery as an alternative to opening up the abdomen. In the past an incision of up to 16 inches was made down the abdomen to allow access to the colon. This resulted in a minimum of 6-7 days in the hospital and large doses of narcotics for the pain. Now, with laparoscopic surgery, he can make three ¼ inch incisions called “ports”, through which he inserts instruments and a scope that projects the images on a video monitor. Another small incision of 2 inches is made to remove the diseased colon. This technique not only limits the trauma to the abdominal muscles but also has proved to be as effective in over all results as the traditional method, as well as decreasing average hospital stays to 3-4 days.

Until 2004 there was not enough qualifying data in the form of studies to prove that this method was an effective way to remove a cancerous colon. Then the New England Journal of Medicine published a double-blind study taking results from across the country and concluded that laparoscopic colon resection is less invasive, has a comparable morbidity (complications) rate and is just as effective and safe for cancer care as the traditional method. Additionally, laparoscopic patients had less pain, shorter hospital stays and returned to work sooner than patients treated with the traditional approach.

We in Central Oregon don’t have to travel across the mountains to find doctors that are experienced in what is a relatively new procedure. Not only does Dr. Kowalski have access to state of the art equipment like the scopes and high definition video monitors but also he has 113 cases under his belt. Doctors like Darren Kowalski are what make this area’s health care what it is – creative, progressive and on par with most urban areas.

﻿﻿﻿﻿﻿Dr. Kent Yundt is a Neurosurgeon with over ten years of experience in neurosurgery research and progressive surgical care for spine and brain disorders. He is currently Chief of Surgery at St. Charles Medical Center and heads up a practice that books over 2000 patient visits a year. This series of articles will discuss advancements in medicine along with the physicians associated with the treatment topic.