You are at:Home»News Pages»E-Headlines»Building a Better Central Oregon Awards Presented in Bend, Oregon
By CBN on October 28, 2014 E-Headlines

The Central Oregon Association of REALTORS (COAR) presented the 38th Annual Building a Better Central Oregon (BBCO) Awards last week at the Seventh Mountain Resort. BBCO’s main purpose is to recognize worthy residents who have enhanced their community with outstanding new or renovated residential, commercial or industrial buildings. Projects are judged on economic impact, neighborhood improvement, unique design or use of materials.

The original PLAZA MOTEL was built in 1950 at the corner of Wall Street and Portland Ave as a response to new travel patterns of motor vacations. This motor lodge was built to supplement the aging Pilot Butte Inn and was popular because of on-site parking, all rooms on the ground floor, motel rooms with bathrooms in each room, and the steam heat.

The property was acquired in 2012 by Pat and Wendy Kelley and Vern and Gretchen Palmer. The new owners wanted to recreate the motel rather than tear it down. The twelve months of renovation that started in summer of 2012 converted 32 motel rooms into 15 suites with full kitchens and two single guest rooms. Each room is unique with six different species of hardwood trim, matching locally made cabinetry, and numerous exotic stone tiles and granite slab combinations. The bedrooms in the suites are separated from the living space with large “barn doors” on exposed hardware. All beds are king sized gel mattress beds and living rooms feature a pull out couch with a gel mattress. Custom made night stands and coffee tables in each room were created by local artisans.

Wall Street Suites is a dog friendly business and features a small “dog park” behind the hotel. Large landscape planters create privacy and an outdoor seating area in front of each room. There are outdoor community gathering areas with umbrellas, tables and chairs, and a fire pit. They offer custom made bicycles for the use of the lodging guests. The Wall Street Suites conference room is available for community or guest use.

The Barney Prines Steakhouse & Saloon was once an abandoned Laundromat that was a community eyesore. In remodeling and moving to this new location, Barney Prines increased in size from their prior location adding additional employees increasing the business by 35%. All the vendors and contractors used in the remodel were based in Prineville. Also, local artistry can be seen throughout the building. The owners focused on using reclaimed materials throughout the process from the table tops to the fire pit outside. The bar top was milled from an old fir tree on a Prineville Property. The remodel was truly a community effort.

People come from all over the world to climb Smith Rock – Bend Rock Gym provides world class year round indoor training ground. This includes an extensive youth program development to engage the youth of our community in this fun, challenging, and rewarding sport through after school activities and camps. Also, the gym establishes a program base and facility that makes climbing an extremely approachable sport for beginners. Finally, the owners are sought to add diversity to what they can offer the community through various clinics and events, yoga classes, and a more traditional fitness/weight room. 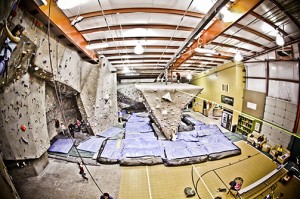 Best Renovation of a Historic Redmond Landmark-Dawg House II, Redmond, Steve Boothroyd
In remodeling building and setting up the new restaurant the owners of the Dawg House II reused furniture, fixtures, equipment and anything else we could re-purposed, some from previous tenant improvements for other projects. Old fixtures were replaced with energy efficient fixtures, equipment, appliances, bulbs etc. to keep utility costs down. As the demolition took place, materials were recycled as much as possible to keep debris out of landfill.

The owners partnered with the City of Redmond to maximize the grant money available for downtown improvements. Family and friends, selected the colors, layout and decorations. Color scheme has been adopted by “Original Dawg House” in Prineville which just moved to a bigger location to help with branding and top of mind awareness. Finally, the Pub area with full bar has made it attractive to have different tastings, demonstrations and ability to showcase local brewers and distillers from Central Oregon.

The Buck Canyon home finishes included extensive use of reclaimed wood on both the interior and exterior. The wood was reclaimed from a large potato barn in Madras, OR. (example 2×8 barnwood was milled into 1×8 material to use as wainscoting on walls). Triple pane glass garage door, from Central Oregon Garage Doors, was installed in the family room instead of French doors or a slider. This is a very creative way of bringing the beautiful outdoors inside. The home utilizes a ductless heating and air conditioning system providing a 30-40 percent more efficient system over a conventional heat pump/furnace system. Each room in the home has an independent ductless system for added zoning / control. To minimize costs and environmental impact much of the native landscaping elements were used to create the final landscaping product:

• Trees that were removed were either chipped up into bark onsite or cut and split for future use in the woodstove.
• All existing rock that was removed during excavation was used to build extensive rock wall features, this minimized costs and also minimized the environmental impact of trucking that was not needed.
• Existing stumps and downed trees were left onsite and incorporated into the landscaping which further minimized costs of disposal and trucking.

The home utilized many steel beams for both structural and architectural purposes. The steel beams eliminated the use of very large wood beams and also created the rustic industrial feel inside the home. The exterior siding “Montana Ghost Wood” was milled from standing dead pine trees in Montana and then milled to our desired profiles.

All lumber that was not rotten or too small to use was cleaned and saved. Most of the materials went to creating or restoring other period structures. The lumber went to:

• 19 windows went to a guy building a shop in the Bend area.

Furnace, water heater, wood stove, doors and wood flooring went to a number of local projects. Original material was kept to keep a connection to the history of the house, but the owners made a conscious decision to take the long view. The owner decided not to over use aged material in the home that it would be so “trendy” that it would be removed in the next remodel. ReStore materials were also used in the home.

The Lodge consists of 26 unit low income senior living apartments that serves population at 30-50 percent of the average income in LaPine. Rents range from $355-$645 (all inclusive) for 1-2 bedroom units. The entire building is an environmentally sustainable and healthy building consisting of:

BCA Architects, Blaise Cacciola and Shawn Kelly, provided valuable feedback and support, not to mention minding all the important details necessary to get the project through the permitting process. The Staley’s could not have maneuvered the process without them. Additionally, CS construction provided extremely competent, professional and efficient service. The construction phase went faster and more smoothly than could have been imagined. The site currently has five food carts: Rico’s Tacos, Brown Owl, Mauna Kea, Thailandia, Real Food.

The dynamic of multiple business owners sharing one space, is one of the most unique parts of the Lot. Each cart brings a different and valuable perspective and personality. They are all stronger and more successful as a team, than they would be apart. This project was a new concept, the Staley’s are very grateful that the City of Bend and OLCC were willing to work with him to make it a reality. The feedback from the City and OLCC shaped the project and helped improve the design, making for a better overall development.

The winery was first incorporated in Bend and in 2005 the land in Terrebonne was purchased for organic crop and wine production. In 2012, the vineyard expansion started with water preservation and organic pest control methods implemented. Traditional European and modern cultivation methods were combined for efficiently. During this time 4200 truckloads of rock were moved.

The Maragas family all participated in every aspect of the renovation. The organic and solar applications paved the way for vintners small and large in the future. The winery has been key in sharing knowledge to grow wine crops previously deemed impossible in Central Oregon. In 2013, the winery won its first All Estate Wine Silver Award in Largest World Competition for American Wines. 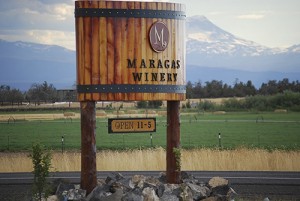 Tetherow Lodges are the first 50 overnight lodging units for Tetherow Resort, more lodging units are in the planning phase. This project was started when the economy was still very weak and made a commitment to hiring locally to help keep jobs in the area. Local architect- Darren Thomas, interior designer-Kirsti Wolfe Design and builder-SunWest Builders were used rather than going outside the area. In addition they were able to use many local products in the construction of the buildings themselves – from hard surfaces to the tea and coffee we supply in each guest room. Currently more than 100 people are employed at Tetherow Lodges and Tetherow Golf Club. 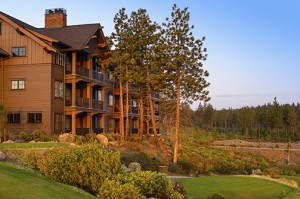 Best Urban Commercial Re-purposing-Wild Ride Brew, Redmond, OR, Brian Mitchell and Paul Bergman
The planning of Wild Ride Brewing began in the Fall of 2011, and the facility was first identified in the Fall of 2012. Extensive construction occurred to turn the facility from a lumber storage facility into a production brewery and Tap House. Many thanks to Ascent Architecture & Interiors, SunWest Builders, Redmond Economic Development and the City of Redmond for their help in allowing our project to come together. Wild Ride Brewing was established in 2013, and opened its doors for business on May 10, 2014.

The Brewery & Tap Room is located in downtown Redmond, and is open 7 days a week. Wild Ride brews on a 20BBL brewing system, with 40BBL fermentation tanks. Customers in the Tap Room can enjoy up to 15 of beers on tap, and order from the four Food Carts located just off of our year-round patio. 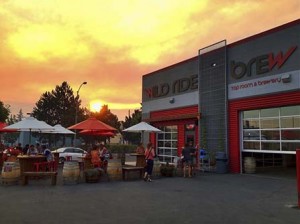 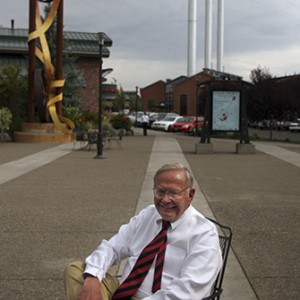