With the U.S. economy revving up to what most would agree is now a solid growth pattern, the burning question becomes: How long will it last? We’ve seen national forecasts range from accelerated growth in 2014 to predictions of entering into a mild recession by mid-year. The follow-on question then becomes: How will Central Oregon’s economy be impacted by these macro trends?

Today’s economy is incredibly complex.  No one factor is a good barometer of times to come; rather, the answer lies in an intensely complicated set of factors that have varying degrees of connection to each other. A more thoughtful way to look at the economy is as an immense collection of different industry sectors with different business cycles and critical factors impacting their growth or decline. At any given time, there will be winners and losers.

For the national economy, EDCO follows top forecasting groups that literally track hundreds of data points.  Many of those indices have been tracking positive but slowing growth rates for the past 18 months.  Expect the first half of 2014 to outperform 2013 but overall the national economy will finish behind that of 2013,then bounce back in 2015. Employment growth, as it has throughout the recovery will lag – due in no small part to continued efficiency improvements, automation and frustratingly, a disconnect between skill sets needed by employers and those offered by the unemployed and emerging workforce.

Forecasters in Oregon are predicting another solid year of economic performance for the state, but have similar concerns about a mild recession in the latter half of the year.  There is also mounting anxiety in the state about how new employment growth is unfolding as more jobs are being created at both the high and low ends of the skill/pay scale, while relatively fewer jobs are being generated for the middle class that drives our economy. This polarization is also being seen across the country.

Despite this macro trend, economists expect to see continued employment growth push down unemployment rates and create some added pressure on wages and salaries which have been largely flat through the past three years of sluggish recovery in Oregon.

Economists tracking the Oregon economy are even more bullish on our region, which they expect will once again lead other parts of the state as it did a decade ago.  Despite our job losses during and following the Great Recession, the Central Oregon region still has Oregon’s highest overall employment growth rates spanning the past ten years.  Population growth, which never entirely left the region even in our low ebb for employment, is returning as a key driver of new economic activity.  Consequently, in-migration will continue to be a mitigating factor to employment gains in lowering unemployment rates, for which we should expect to remain several points above the state and national average.

However, there are some noteworthy structural differences between Central Oregon’s economy today and our previous peak in 2007.  Steadily but quietly, diversification is happening with more jobs and companies in sectors other than we’ve relied on in the past.  In fact, in 2013 employment in construction is down 57% from 2007 levels and, remarkably, has dropped as an overall percentage of employment from 13% to 6%, a figure still higher than the 4% national average, but in much more healthy alignment than it was six years ago.  Replacing those jobs are a very interesting mix of sub-sectors – many which are relative newcomers to the region. 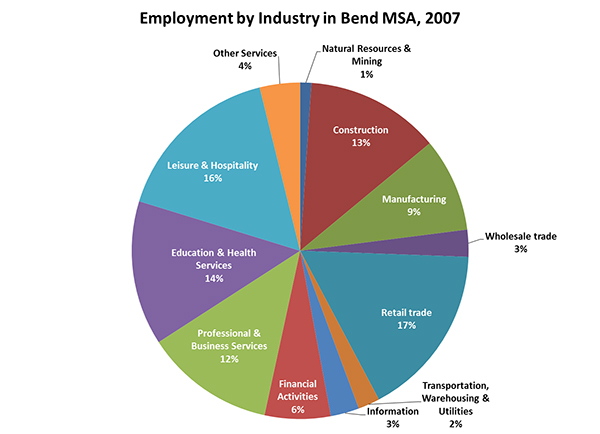 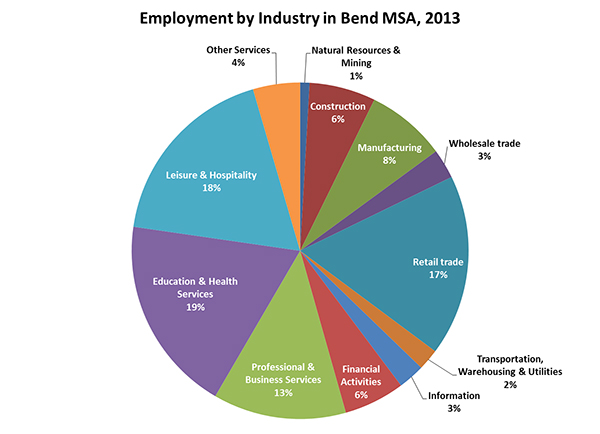 At EDCO, which focuses its limited time and resources on what are called traded sector
employers (those that export most of their goods or services outside the region—think technology, manufacturing, and information/creative services), we have never been busier. 2012 was a record year for the organization! We helped private, traded-sector employers add 1,136 new, well-paying jobs while investing more than $340 million dollars into buildings and equipment. We reached a new record in 2013, helping 31 new, existing and early stage companies complete relocation, expansion or launch projects that created an additional 720 family-wage jobs.

The pipeline of projects EDCO expects companies to make investment or location decisions in 2014, has never been stronger. We currently are in the final stages with 128 companies that collectivelywould create nearly 2,000 new jobs and invest $1.1 billion in new capital investment in the tri-county area.

Industries represented in this portfolio of firms include: advanced manufacturing, aviation/aerospace, bioscience, brewing & distilling, outdoor equipment & apparel, software, data warehousing, and food processing. Not all of these projects will come to fruition in the year ahead, but we are confident that a significant number will. These successes will continue the quiet diversification that is, slowly but surely, transforming our local and regional economy.

EDCO works not only on a company-by-company basis, but on initiatives that help lay the strategic foundations for Central Oregon’s economy.  Efforts on this front take many forms – from formal initiatives to more ad-hoc committees, each involving scores of volunteers, which will provide the necessary infrastructure to make company recruitment or expansion more feasible. For the year ahead, these include:

• UAS (Unmanned Aerial Systems) Business Enterprise:  both a statewide and regional effort to make Oregon a national center of excellence for commercialization of unmanned technology;

• Outdoor Roundtable: encouraging the growth and further development of the region’s 50 + companies involved in outdoor equipment, vehicles and apparel;

• Software CEOs: leveraging work of other organizations including the Technology Association of Oregon (TAO), with our own local talent pool of three dozen software companies;

• High Desert Enterprise Consortium (HiDEC): helping manufacturers and other companies in the tri-county area with complex operations to solve critical problems , reduce waste and increase productivity through implementation of Lean and other best practices;

• Research Coalition: helping individuals in this sector  launch a new industry group around medical and other research to better utilize existing talent while recruiting other opportunities;
• Farm Pharma:  an effort just in the formative stages to better capitalize on the growing critical mass in pharmaceutical research and development capacity within the region;

• Bay Area Campaign: focus marketing and recruitment efforts on this geographic area for high technology business, individuals and entrepreneurs. With these and other efforts, EDCO continues to be bullish on what the future holds for the year ahead. Given the momentum in our region, we are optimistic that even if the national economy slips into a mild and short-lived recession, we may be able to power through less scathed than our last experience.