You are at:Home»News Pages»E-Headlines»Common snake species found in Oregon and what attracts them to your property
By CBN on November 20, 2020 E-Headlines

Oregon’s snake population isn’t normal, and the city is home to some native snake species. We are going to learn about them, and also know what attracts them to our properties. If you are dealing with snakes on your property, this is a great resource. However, the best course of action is always to hire a professional for safe removal. 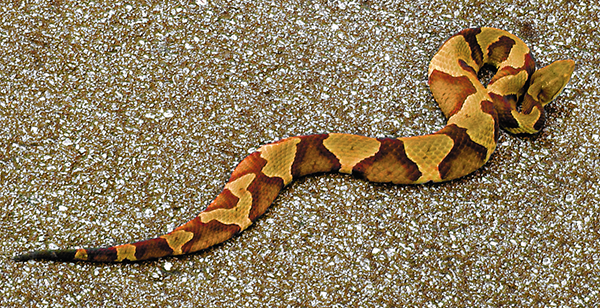 The racer’s coloration ranges from olive to bluish grey, and it has a pale yellow belly. The racer lives in warm, bushy, dry, or open areas. It goes under logs, shrubs, and rocks. It stays clear of high mountains, arid areas, and thick forests. The racer is found throughout Oregon, but not the crest of the Cascades, and along the coast. An adult racer is two to four feet long.

The northwestern garter snake has yellow, white, blue, red, or orange stripes that run lengthwise on the snake’s black or dark grey coloration. This snake lives in thick underbrushes, logs, gardens, piles of rocks, wet meadows, moist forests, downed woods, and open valleys (when basking). The snake’s region is Willamette Valley, and it is also found in Rogue Valley. Also, it is commonly seen in suburban areas and parks. An adult northwestern garter snake is two feet long.

The western terrestrial garter has a grey-brown or black coloration, with yellow checkered patterns and yellow stripes running down its length. Since there are four subspecies, their preferred habitat varies. While two can be found some distance from a water source, they are all found in moist areas like streams, swamps, marshes, and lakes. An adult western terrestrial garter has a length of three feet.

The rubber boa has an olive green to light or dark brown color. Just as the name implies, it is rubbery to touch and looks like it’s made of rubber. The species can be found in different habitats, like log, bark, rotting stumps, crevices in cliffs, flat stones, or under litters of dead leaves in the forest. Its range is coastwise but not along the coast north of Coos Bay. The rubber boa is three feet long.

The gopher snake is light brown with dark brown blotches in color (similar to a rattlesnake); a distinctive dark stripe extends across its head, then down through its eyes. You can find this snake type in hotter, drier areas like deserts and places like grasslands, woodlands, less dense forests, and south-facing slopes. Its region in Oregon is throughout the state, except for the coast, and above 2,000 feet in the Cascades. It has a length of three to four feet!

Now, how can you stay safe from snakes?

WHAT ATTRACTS SNAKES TO YOUR HOME?

RODENTS ATTRACT SNAKES. Rodents are a delicacy for these snakes, and they eat rodents, such as mice and rats. Try as much as possible to reduce the number of rodents around your property. Learn how to get rid of rodents here.

Snakes like cold, moist, and safe areas, so it would be best if you avoided places around your home that give snakes comfort. Cover parts of your home that snakes could crawl in through, keep piles of wood and debris FAR from your home.

If you keep your garden or lawn watered, it attracts rodents, and as stated before, rodents attract snakes. During hot seasons, well-irrigated areas serve as a cool home for snakes. Tread on such sites carefully, and be careful while you work.

There is no protection for snakes on open paths. Avoid bushy areas.

Tall grasses provide cover for snakes. Your neighbors will appreciate you trimming the tall grasses, you can easily identify snakes, and your home will look better for it anyway.