If you told me 12 years ago that my job would be driving horses I would have laughed you out of the room. At that time I was just moving to Central Oregon after two years at Pfizer Pharmaceuticals in Ann Arbor, Michigan working as a full-fledged computer nerd. It’s not that horses aren’t in my family’s history, I just never thought they would be a significant part of my life more than trail riding. 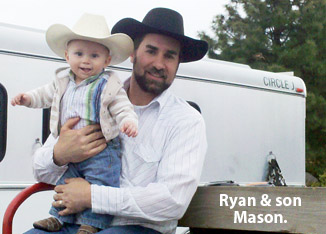 My grandfather used Percheron horses to plow the fields for the family dairy farm in Mt. Pleasant, Michigan before he bought his first tractor. Two of my uncles who live here in Oregon had small businesses with draft horses. They both were closing their horse-drawn businesses and I combined them to form Cowboy Carriage. It just happened, and now I can’t imagine my life without it.

Dan and Saucer were my first team of Percheron horses that I bought from my uncle Jeff, along with a large wagon and even larger horse trailer. He had been delivering Christmas trees, Christmas caroling and giving hayrides at Olson Farms Pumpkin Patch near Portland.

My uncle Eric also was at a point where he wanted to sell his black and white vis-a-vis (face to face) wedding carriage. When they were ready to get out of the business in the summer of 2010, I found myself laid off from a construction job and decided to see if Bend would be receptive to having a horse and carriage in town.

I’ve been around horses before, but when Dan and Saucer stepped out of the trailer at my house the first time I was intimidated. They are nearly six feet tall at their withers and 2,200 pounds. Quickly we learned each other’s personalities and tolerances and we have been best buddies ever since.

Having a relationship with such massive animals that trust you and that you can trust is an awesome feeling. I can even persuade folks that have a fear of horses to approach them because I assure them they will never meet a more gentle horse. They will even lower their heads to my four-year-old boy, Mason, in the pasture so he can give them a pet.

Dan and Saucer were the beginning of Cowboy Carriage but at 22-and 24-years-old they are slowing down. Now that we are becoming more popular I want to make sure they work only just enough to stay healthy. Most people think that the best retirement for a horse would be to turn them out into a beautiful green pasture, right?

I would compare that to tying you to a couch and feeding you chips and pop. They still need exercise in their older years just like we do. I will make sure they get to do the easier and more fun events like little girl’s birthday parties or weddings in their semi-retirement, though.

This past September I went to the Washington State Fair in Puyallup to meet with the same family that my uncle Jeff bought Dan and Saucer from. After their last show I brought home the duo’s relief team, Kurt and Roman. 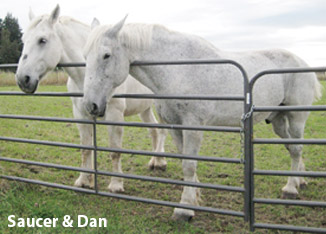 Now, Dan and Saucer are good looking horses, but were never pretty enough to be ‘show horses.’ Kurt and Roman are taller, leaner and even more handsome. And boy, do they have some energy! Whenever show horses are in the arena they are always trotting because they pick their front hooves way up and look more impressive.

I’m having to teach them that they work longer than a half an hour now and need to learn to pace themselves. Kurt and Roman will be giving the majority of the carriage rides in Downtown Bend this summer and pulling wagon loads of folks giving brewery tours on the Bend Ale Trail.

Kurt, and Roman and I started our relationship this past fall working at Olson Farms Pumpkin Patch in Damascus and then even more during the Christmas season. Along with all of the carriage rides in the Old Mill District and at Brasada, we started a Christmas Caroling tradition through downtown and the Historical District.

Our new friends at Foxtail Bakery and The Human Bean provided Christmas cookies and hot chocolate for everyone on the wagon and I made caroling books so everyone knew the words. There were a few folks that said they couldn’t sing well, so I told them that they can make up for sounding bad by singing louder.

We look forward to seeing the families again this Christmas as they have two weeks before anyone else to reserve their ride again so that it can be a family tradition to hear the bells on bobbed tails ring.

Cowboy Carriage keeps me busy in the summer and at Christmas. The rest of the year I am a school bus driver. I’ve always liked working with kids, so I find enjoyment in supporting local children’s organizations. In the past year we have donated carriage rides to help support schools and organizations. 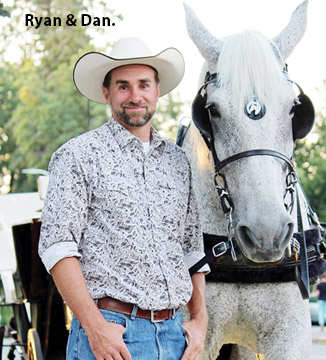 Most of the people associated with these groups have found Cowboy Carriage through conversation during their carriage rides with me.

I’ve had some good jobs, but none compare to being a part of people’s lives that they will never forget. Overhearing a bride’s conversation with her father on the way to the ceremony, providing a horse and carriage for a little girl’s princess birthday party, showing up outside a restaurant to give a surprise 50th anniversary ride for grandparents, planning with young men to make a marriage proposal be something their future brides will never forget, even a simple check on a bucket list.

There isn’t another job in the world where I would be included in such special memories of people’s lives.

(Photos above: courtesy of Cowboy Carriage | Horse and carriage by Chris Mather.)