You are at:Home»News Pages»E-Headlines»Deschutes Tied for Fastest Growth in Gross Domestic Product in 2016
By CBN on September 28, 2017 E-Headlines

The Bureau of Economic Analysis just released the gross domestic product (GDP) figures by metropolitan area for 2016. The Bend-Redmond metropolitan statistical area (Deschutes County) tied for the fastest growth in gross domestic product among the nation’s 381 metropolitan areas between 2015 and 2016. In case you are curious, we tied with the Lake Charles Metropolitan Statistical Area, Louisiana for fastest growth in GDP. The county posted an annual growth of 8.1 percent, a gain in production of $905 million dollars from 2015 (in current dollars).

As a reminder, gross domestic product represents an estimate of the total dollar value of all goods and services produced in the given geography over a specific time. It is the economy’s output. The majority of this output is market production, meaning those goods and services produced for sale in the market. However, a portion of GDP is non-market production, such as education services provided by local governments or management of our public lands. Gross domestic product is equal to the value of final goods. For instance, if a business produces cogs (intermediate product) for clocks (final product) then their production is not directly counted in GDP. Instead GDP measures the value of the clock (final product), which theoretically includes the production value of the individual cog.

Nationally, metropolitan areas averaged a 1.7 percent increase in GDP with the professional sector, information, and financial activities driving the majority of the gains. Locally, every major industry sector posted stronger gains (or in some cases less severe declines) than the national average. Similar to the national trend, a large share of the Bend-Redmond GDP growth came from the financial sector, which accounted for around 32 percent of the annual growth in economic output. This was likely tied to the rapid recovery in the housing market as the sale of homes is a major component of the output in the financial sector. Other industry sectors that were major drivers in our recent growth in GDP included professional and business services, durable goods manufacturing, and health care. 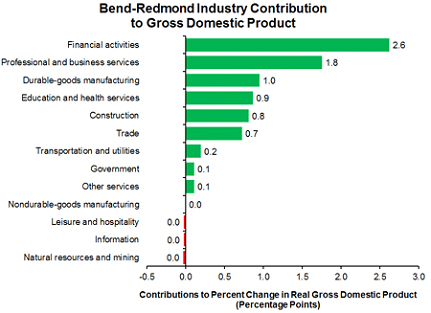 It is important to remember that gross domestic product is a lagging economic indicator. It tells us something about the past, in this case, the output in our economy nearly a year ago. Many of the most referenced economic indicators are lagging, such as the unemployment rate, nonfarm payroll employment, and the consumer price index. These indicators tell us where we were, but do a relatively poor job of telling us where we are going. That being said, we have continued to see strong job growth through most of 2017 with employment levels sitting roughly 5 percent above where we were at this time last year. Employment is a major driver of gross output, which bodes well for continued strong gains in gross domestic product in 2017.