Residents of Central Oregon who survived the great recession of the late 2000s (and perhaps those who didn’t) are probably wondering how the local market could change so drastically in just a few short years. Look around Bend, Redmond, Sisters and all of the other Central Oregon communities and you’ll see what a difference a few years can make. Houses are being built at breakneck speeds, while in the commercial real estate market, office product, retail and industrial buildings are filling to near capacity. In Bend, the OSU-Cascades campus is a reality and the parks districts are expanding their offerings throughout the region.

In March, Oregon reported an unemployment rate at 4.5 percent, the lowest since comparable records began in 1976, and ultimately beat the U.S. jobless rate by .5 percent. All things considered, the overall future for our local economy appears to be pretty darn bright (of course, that’s leaving politics out of this equation to keep a rosy outlook).

Compass Commercial’s2016 1st Quarter survey reports that Bend’s office, industrial and retail vacancies are at or near record lows of 6.3 percent, 3.4 percent and 4.7 percent respectively, while Redmond’s industrial vacancy is just 4.8 percent.In the 20+ years that Compass Commercial has been tracking regional market data there have only been three quarters (out of 88 surveyed) where the office vacancy has been this low. Just nine quarters out of 88 have experienced lower industrial vacancy, and no period with lower retail vacancies have been reported since we began tracking the retail market in 2008.

Redmond industrial vacancy has only experienced six quarters (out of 81) of lower vacancy since we began surveying that market in 1995. With this data, all indications point to continued growth and economic well-being for the foreseeable future.

The snail’s pace at which the Bend UGB is reaching approval should be mentioned, as it invariably affects the local real estate market and Bend’s economy as a whole. With a lack of buildable land, we have seen land prices soar to pre-recession levels, which will make new commercial and industrial construction projects difficult for developers to pencil.

On the other hand, developers are starting to conceive infill projects, which was the intention of the state remand of Bend’s originally requested 8,000 acre UGB expansion. The fallout required the city to conduct numerous feasibility studies and land use surveys to arrive at its current modified request for just over 2,000 acres to accommodate 20 years of expansion. It should be noted that Redmond requested a similar amount of land in its recent UGB expansion to accommodate a community one-third the population of Bend’s.

Several of these infill projects are already underway or are currently on the drawing board. A local developer recently paid over $40.00 per square foot for commercial land on Third Street (which technically included three buildings that will be torn down) to build a 9,400 square foot retail building on .71 acres. Lease rates are pushing the envelope at $3.00 per square foot on a triple net basis, but the complex is already almost fully pre-leased, demonstrating the demand for new retail in our hot market.

The Crane Shed Commons office building under construction on Industrial Way has solid prospective tenants currently vying to move into the 50,000 square foot, four-story Class A building, where lease rates are listed at $2.25-$2.50 per square foot triple net. This is on the location of the former lumber mill crane shed that sat on the site for nearly 70 years until it was infamously torn down in a midnight demolition debacle in 2004 by a previous owner.

In northeast Bend, the former Fuqua Homes manufacturing plant has been redeveloped as the Murray Road Industrial building which already has leased over half of the 115,000 square foot project.

These are all great examples of infill projects in the Bend area where bare dirt or older buildings are being transformed into fresh developments. It’s a testament to the vision shared by the developers —courageous individuals willing to take the risk of undertaking these endeavors. Hats off to you!

No doubt, Central Oregon’s diverse communities offer a wonderful place to live, recreate and to conduct business. Our climate, lifestyle and culture are the envy of cities around the country. Still, despite Bend’s lack of affordable(or just plain supply of) housing, the city continues to make nation-wide lists of ‘Best Places’ and that can in part be attributed to the fine folks that invest in our community.

Yes, big changes are on the horizon with a four-year university adding to the population, but the growth promises to infuse our community with a new breed of talented, young people that will eventually join our work force and contribute to our growing economy. Whether you’re a proponent of urban density or not, economic growth through the development of our community’s human resources is something we can all appreciate.

Howard Friedman, CCIM is a partner and principal broker with Compass Commercial Real Estate Services in Bend and is the editor of Compass Points, Compass Commercial’s quarterly survey of the regional commercial real estate market.

Compass Commercial’s publication, Compass Points provides quarterly data in its survey of the regional commercial real estate market. The report provides vacancy and absorption information pertaining to the Bend office, retail and industrial markets and a survey of the Redmond industrial market. Visit www.compasscommercial.com to view the complete report and data summaries. 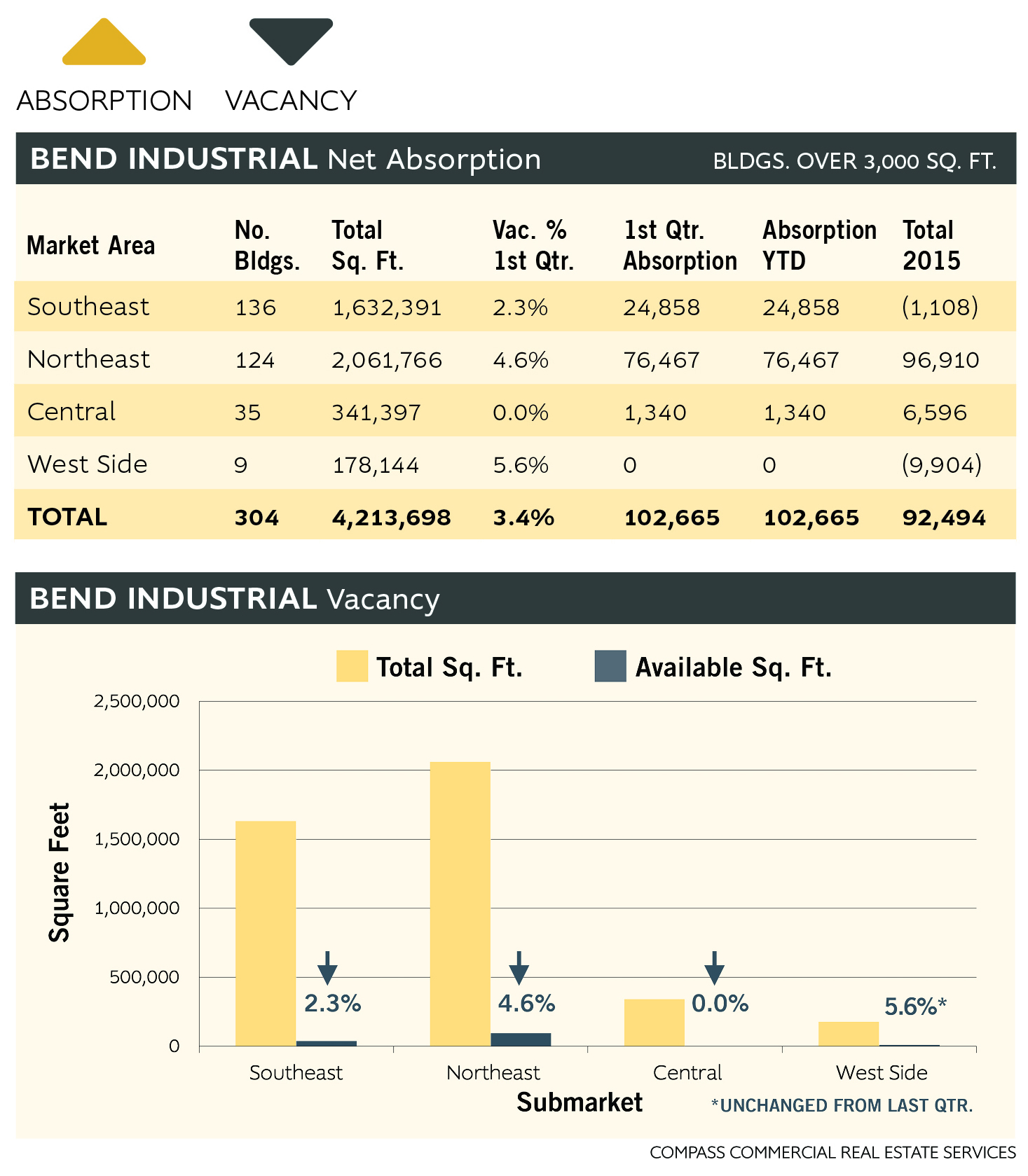 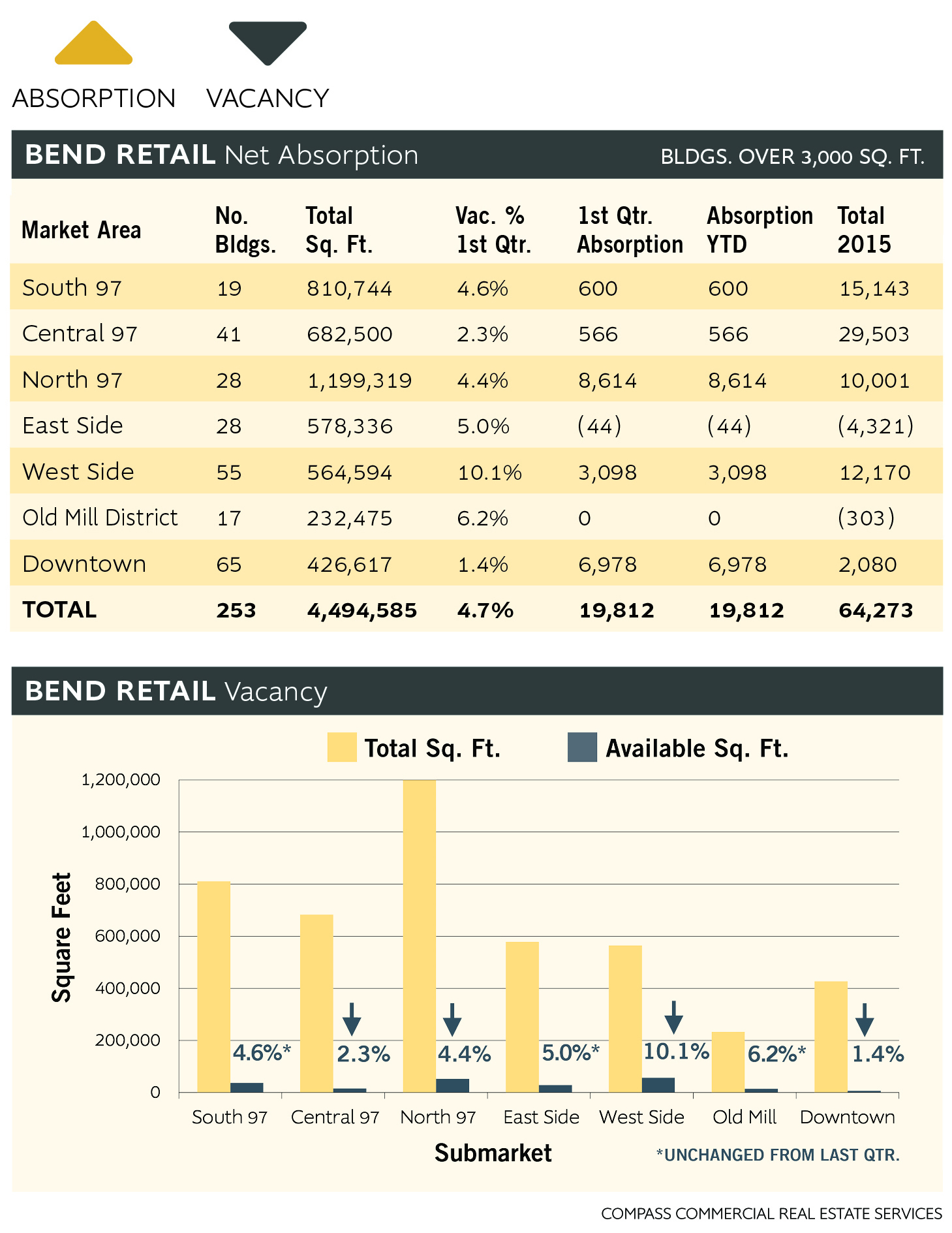 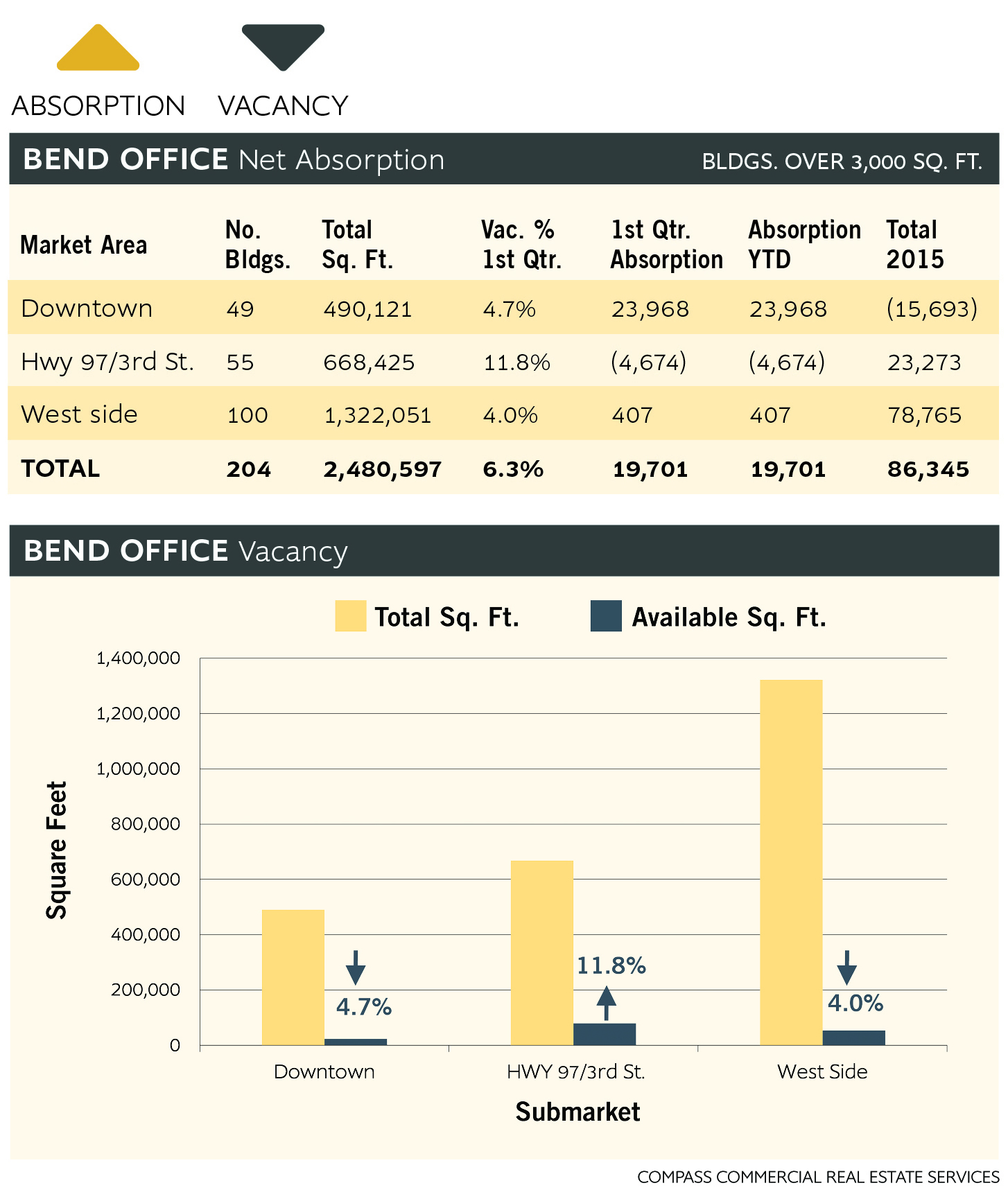