You are at:Home»News Pages»E-Headlines»Job Growth Strong but Unemployment Remains High in Central Oregon Region
By CBN on September 23, 2014 E-Headlines

Total nonfarm employment rose by 40 jobs in August, a typical gain this time of year. 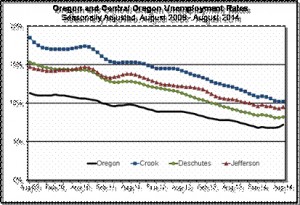 Total private employment remained stable in Crook County, while the public sectorsawsmall gains. Local government was the only industry to post a noteworthy employment change from July, adding 40 jobs.

Compared to last year, total nonfarm employment is up 230 jobs (4.1 percent). Over half of this growth can be attributed to gains in construction (+60) and wood product manufacturing (+60). Local government, +80 jobs, anchored public sector hiring over the past year. Notable declines were limited to professional and business services, which shed 50 jobs from last August.

This summer’s strong hiring trend in Deschutes County continued into August; 480 jobs were addedwhenaloss of 140 jobs is the norm this time of year. Monthly hiring was concentrated in accommodation and food services (+190) and professional and business services (+110). Monthly losses were small and concentrated in other services (-50).

Job growth in Deschutes County continues to outpaceall other metro areas in Oregon, up 4.4 percent from August 2013 (+2,940 jobs). On a seasonally adjusted basis, employment levels are now only 3,140 jobs shy of peak employment. Job growth over the past year was dominated by four industries; leisure and hospitality (+990 jobs); educational and health services (+710 jobs); mining, logging, and construction (+660); and professional and business services (+550 jobs). Job losses over the last year were concentrated in financial activities, which shed 200 jobs.

Jefferson County shed 90 jobs in August, fairly close to the decline of 80 jobs typically seen this time of year. Indian tribal government was the only sector to post a significant decline in August, down 100 jobs. No industry posted noteworthy employment gains.

Employment levels are up 160 jobs from this time last year (+2.7 percent), similar to the statewide growth rate. Manufacturing continues to be a significant driver of job creation, adding 90 jobs from last August. Retail trade and other services each posted moderate gains, both adding 30 jobs. The only industry to post notable losses was transportation, warehousing, and utilities (-20).

These estimates will be revised as new data from businesses becomes available. The next Central Oregon Employment Situation with preliminary data for September2014will be released on Monday, October20th.