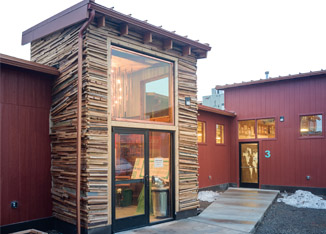 Local organization chiefs scouted for a suitable home for the operation, which sells new, surplus and “gently used” furniture, home accessories, building materials and appliances to the public at a fraction of the retail price, after outgrowing the prior spot on First Street in Bend.

And when the one-time Backstrom Builders Center site, which had included a lumber yard and hardware store on 2.3 acres off Thurston Avenue became available, they saw the opportunity for raising the profile of the ReStore program – which is fundamental to BAHFH and its mission of providing affordable homeownership, home repair and weatherization services for low income families and individuals in Bend and Crook County.

Backstrom’s was established in 1967 and was a community fixture until it closed in March of 2012. After acquiring the property, Habitat and key team members who generously donated services including Stemach Design & Architecture and CS Construction, worked on utilizing and adding to the existing buildings as part of a unique community-wide collaboration with the help of 27,000 volunteer labor hours on the $1.6 million initiative.

The project emphasized environmental stewardship in all aspects of a $400,000 six-month-plus renovation, beginning with the demolition phase where lumber, metal roofing and other building materials were salvaged and redeployed in the development of the new 18,000 square foot store, which also provides for greatly expanded parking and more convenient donor access.

Stemach Design is known for shaping innovative projects featuring economic, environmental and equitable sustainability with a positive impact to their surroundings in the NorthWest, and project design leaders Stacey Stemach and Matt Tynan were instrumental in interweaving recycling throughout the ReStore reinvention.

The old Backstrom main building was stripped and gutted, with a sizable portion of the materials re-purposed, including metal roofing reused as siding.

Seemingly naturally undulating exterior cedar-plank siding – which Stemach observed added to the “eyebrow-raising effect” of the overall visual impact aesthetic – is comprised of reclaimed cedar decking that was donated and ingeniously incorporated.

A custom chandelier made of reclaimed wood and copper piping was also created by Stemach Design for the store’s entryway, while reclaimed barn wood features prominently around a front desk countertop made from remnants of ReStore’s broken windows.

Portions of the existing structures were removed and rebuilt using energy-efficient staggered stud construction, HVAC ducting was added and most of the store’s windows and several doors were Habitat donations that were integrated into the design.

Clerestory windows added above areas of the old CMU block also allow for more distribution of natural light, and plans are in the works for an extensive 60kw roof-mounted solar array to boost energy efficiency, with the help of grant incentives.

A break room table was even created utilizing the distinctive old Backstrom sign, and hardware shelving was reclaimed from the now defunct Bend Sears store for the princely sum of $132.

As well as the more typical home improvement products, one section of the store is devoted to CUPs (Creative Upcycled Projects) where ReStore volunteers transform overlooked merchandise into fun home furnishings, complementing other innovative fundraising initiatives such as the recent “Doors to the Future” in which local artists turned recycled doors into artworks that were auctioned off.

Boosted by a more visible, spacious and inviting facility off Hwy 97 across from Wagner Mall, Bend Area Habitat for Humanity Director of Operations Chris Neumaier said customer levels in the first month of operations compared to the same period last year had already risen considerably.

He added, “The former ReStore financed 75 percent of Habitat’s local budget but the goal of the new facility is to establish greater revenues that will provide more self-sustaining scope and aim to fund 100 percent of area operations.

“That would mean hitting gross revenues of $1 million annually, which would put us among only a few ReStore’s in the country to hit that level in towns with less than 100,000 population, but we think we have the potential to get there now.

“We feel fortunate to have been able to capitalize on this opportunity and we appreciate the property sellers having worked with us very considerately and being supportive of seeing the property revitalized as a community resource. We also had the benefit of fantastic partners like Stemach Design and CS Construction that did an incredible job of realizing the vision.

“Moving the ReStore was motivated by a couple of primary factors that were seen as important to our community. We had outgrown our old store and wanted to improve the shopping experience for our many customers and donors.

“Secondly, an enhanced and expanded store increases Habitat’s ability to finance affordable home construction and repairs for low-income individuals and families at a time when traditional funding is declining.

“The need for low-income housing and repair services is great. As proud as we are for positively impacting the lives of more than 500 children and adults by building 106 homes and providing home repair services for more than 60 households, we are only scratching the surface of this community’s needs.”

Neumaier added BAHFH organizational priorities over the next few years include increasing the number of families served, supporting and expanding performance from the highly qualified staff, increasing cash flow, and ensuring a successful expansion of the ReStore business, including completing a successful capital campaign.

The Bend ReStore also provides an alternative option to disposal of materials generated through the activities of building and remodeling. Using dollar-to-pound equivalencies determined by Oregon’s Department of Environmental Quality, it facilitates the reuse of more than two million pounds annually of building material, furniture and major appliances. It offers free reclamation and deconstruction services, and operates several recycling programs.

Bend Area Habitat for Humanity Board President Darrel Buttice said, “With Habitat’s environmentally friendly philosophy of recycling and reusing, we felt picking the former Backstrom Builders Center could be a win-win for the community.

“For diligent and hard working, low-income families, the new and enhanced ReStore will allow Habitat to better fund the construction of homes for these families.

“For shopping enthusiasts looking for good deals on gently used building materials and household items, they will experience a vastly improved store. And for the environment, the new store will expand its ability to recycle millions of pounds of material, rather than letting it end up in our landfill.”

The Bend area Habitat for Humanity affiliate got its start in 1989 when a group of like-minded people saw the pressing need for decent affordable housing for hard-working low income families.

Rather than talking about the problem of home ownership for this segment of the community or turning to government to deal with the problem, they set about creating an environment where volunteerism became the key to helping the disadvantaged, one home at a time.

In its 25th year, Bend Area Habitat for Humanity has built 106 homes and served more than 500 children and adults through their homeownership and home repair programs. Bend Habitat is dedicated to providing affordable services and creating long-term sustainable change for families and individuals in Bend and Crook County.