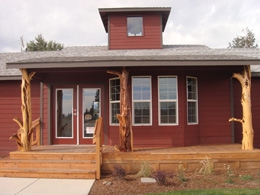 A pioneering spirit has led an award-winning Central Oregon microdistillery to a new home on a sprawling Tumalo estate, rewriting state land use laws in the process.

Bendistillery’s 24-acre site off Pinehurst Road is also set to host tours and tastings in an organic farm setting, complete with meandering paths and a performance stage, offering mountain views framed by voluminous

The move also places the operation squarely on the bourgeoning agritourism map and the longer term goal is to grow on-site the crops used in Bendistillery’s spirits, which are finding a widening national fan base.

In fact, the ubiquitous juniper is at the root of company’s creation. Founder Jim Bendis, who led a revival in the boutique spirits industry when he formed the company in 1996, explained: “I first developed the idea after seeing how popular Northwest microbreweries were becoming using fresh, natural, often local, ingredients.

“I thought why not do something similar through a small batch distillery, starting with an all natural gin utilizing our wonderful water and hand-picked berries since, after all, we are in the world’s largest juniper forest.”

In an interesting side note, not only is the juniper berry best known for the primary flavoring in gin, it is also  responsible for its name, which is a shortening of the Dutch word for juniper, genever.

Bendis added: “Central Oregon also has some of the purest water in the world, and, in fact our filtering process also mimics nature by running through crushed lava rock to maximize purity.”

From an original production base in Bend together with its innovative downtown Martini Bar, which was subsequently sold, Bendistillery developed a stable of products, including the signature Crater Lake Vodka, which utilizes Midwest grain and is filtered 10 times through charcoal and crushed lava rock. Aged in oak, with a renowned smooth, soft, spring water taste and hint of vanilla finish, it is a perennial favorite and won Platinum Medal at the Sips Awards International Spirits Competition, 2010.

Following the original Cascade Mountain Gin, the company also branched out into flavored spirits, including the Mazama Infused Pepper Vodka, featuring a balance of five different sweet and hot peppers, which took Gold Medal in the 2004 World Spirits Competition.

Another popular blend was formulated in the shape of the Cofia Hazelnut Espresso Vodka, a rich, flavorful combination which walked off with Platinum Medal and Best of Show in the 2006 World Beverage Competition.

And the latest incarnation, named the Diamond 100 Vodka, another multiple award-winner hailed by Spirits Review as “one of the best new American vodkas”, arose through something of a coincidence, when one of the production staff forgot to turn off the filtration system at the end of the working week.

Bendis added: “We arrived on Monday morning to find that the vodka had been filtered around 100 times, which resulted in an extraordinarily soft and pure product, so we ended up running with it as a premium offering which has proven very popular.

“Actually, we are very proud that, in contrast to the large distilleries, people rather than machines are involved in our process every step of the way and we truly do hand craft in every area all the way up to bottling and labeling.”

Attention to detail also extends to the importing of a wide variety of bottle styles from Europe due to the limited range available in the U.S.

The increasing popularity of the Bendistillery brand, which has grown on average 30 percent per year, led to the company being approached to supply private labels currently ranging from golfing legend Fuzzy Zoeller’s “Fuzzy’s” line to supplying the ultra-hip Nobu restaurant chain.

Such increase in activity has seen Bendis open a part-time office in Southern California to cater to companies in that locale, and was a driving force behind the search for a new, larger base to consolidate operations and elevate the company’s profile.

The result is the new Tumalo site which includes a converted barn and farmhouse – featuring, appropriately enough, a hand-made juniper log deck – on a property Bendis purchased three years ago, though success was not achieved without a struggle.

Bendis said: “Sometimes it’s tough to be a pioneer and we basically had to rewrite Oregon land use law to do what we are doing.

“There were classifications for wineries and breweries with sampling rooms in rural areas, but nothing that addressed distilleries.

“There were a lot of regulations to navigate and Ben Westlund helped greatly regarding writing a senate bill which ultimately passed and defined the logistics to the satisfaction of the state and Oregon Liquor Control Commission.

“Our previous facility was not meeting our needs so this was an opportunity to really plan for the future and not grow piecemeal.

“We are setting the precedent for microdistilling around the country and I think further growth will come from showing customers up close where we get our grains and how he makes our spirits.
“Often, I don’t think people see vodka and gin as natural products,” he added. “I want to let them see how we’re making our spirits and that we do actually use natural products.”

Future ideas include experimenting with different crops that could be fermented and distilled to make different spirits, as well as looking at growing ingredients used in flavoring.

Bendistillery Marketing and Sales Manager Alan Dietrich, who helped design and build the new facility along with a team that included Bendis, LB Engineering and general contractors Braatz Earle, said: “Getting the conditional use permit has allowed us to come into the same category as wineries, and to realize the concept of accommodating a range of activities from production to tasting and tours.
“We are plugging into the Oregon culinary and agritourism framework, which is a growing movement locally.

“This also serves to heighten our profile and allow people to see our whole operation, rather than it being a backroom function.”

Dietrich has worked with the company for some 10 years, and recognized Bendis as a leader in his emerging field.

He added: “Back in the old days everyone made their own spirits, then prohibition hit and the American tradition of distilling basically went dark, before going on to survive primarily in the South.

<“Jim was at the forefront of launching a revival of the hand-crafted small batch distillery as one of its premier exponents and early pioneers, though the industry has grown exponentially in recent years.
“The new facility is another step in developing the vision, which is going in another groundbreaking direction in terms of what a microdistillery can offer.”