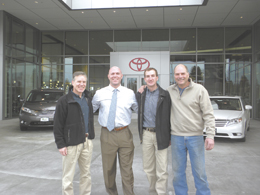 In a return to the glory days of palatial automobile showrooms of yesteryear, Toyota Scion of Bend opened last month with great fanfare and high expectations, a marriage of elegant style and the latest Green technology engineered into its striking design.  The 50,000 square-foot building now ornamented with hundreds of bright new cars opened its doors December 28 on Bend’s south side.

It’s the creation of Neal Huston and Associates Architects and SunWest Builders of Bend, who worked integrally with Toyota’s corporate architects, the global design and architectural firm, Gensler, to build a flagship dealership and an iconic beacon of hope to Central Oregon’s challenging economy.  Initially conceived in 2004, the structure went from site development to full occupancy in just under one year with a total budget of nearly $13 millions.   Todd Taylor of Taylor Northwest was responsible for all the site development, utilities and earthwork.
Kevin Link of SunWest acted as senior project manager in conjunction with Project Superintendent Mark Miller who gave his heart and soul for six months to make the dream a reality.

Dealership owner Todd Sprague decided early on that he wanted to feature the energy efficient LEED (Leadership in Energy and Environmental Design) program, a rigorous building rating system and certification process that’s been around for over 10 years and allows for different levels of award  achievement – Silver, Gold and Platinum.
Its environmental impact guidelines incorporate all aspects of Green design including hi-efficiency HVAC systems, storm water filtration into drainage swales and aquifers, high reflective roof materials and extensive use of low-water native plant materials with landscaping.   For reaching the highest certification level there are sizeable tax incentives once the certification process is completed.

“It’s fantastic,” proclaimed General Manager Robert Durfee inside the dealership’s opulent new home.  “The reception from the community has been exceptional.  We had a huge crowd for our grand opening.  From a design and construction standpoint the whole process has gone perfectly.  Everyone did an excellent job.”

189 new vehicles now grace the lot with over 100 previously-owned cars and trucks.   That number will ramp up to a total of 400 models and makes in the upcoming months.

“The way the space is designed, we can make a lot three times as big look full, which allows us to increase our inventory and manage its seasonal fluctuations. That flex feature lets us keep a consistent look regardless of the number of vehicles, and that’s not easy to do.”

John Gerard of Neal Huston and Associates was the project architect.  “We had an end goal to get it built and built right, first to organize the timeline, rally the staff and delegate the work to each member’s expertises and monitor it daily and weekly and reach your milestone.” he said. “So much of the job is budgets and codes and ordinances and making sure you haven’t missed anything and present a clean, comprehensive project you’ve worked thousands of hours on and get all your bases covered.  Between coordinating with the contractor and sub-contractors according to the construction documents, it’s an incredible level of involvement.”

A gleaming front portal, emblazoned with the Toyota and Scion logos, is clad in special milk-colored glass.   From a distance, bathed in nocturnal illumination, the portal takes on the appearance of an Asian lantern dominating the facade.  There is a cleanness and clarity in the painted aluminum panels and monochrome color scheme that presents itself as both modern and classic at the same time.

“The consistency of imagery the dealership itself invokes in very important to Toyota and we were very sensitive to those aspects of the design,” said Gerard.  “It’s infused with a progressive identity that Toyota wishes to convey, much more so than the normal run-of-the-mill dealership.”

An immediate sense of openness is achieved upon entering the building.  Natural light floods down from windows and skylights carefully integrated into the commerce arena.  The spacious showroom floor and supporting space is complimented by an open customer lounge area with big-screen tv and bistro cafe designed for convenience and comfort.  Ceramic floor tiles are composed of recycled content and acoustic ceiling squares, paints, sealants and adhesives are all low or no VOC’s (Volatile Organic Compound.)   Rectilinear appearance is softened by a curving diagonal wall encompassing  an upstairs level of offices,  injecting a non-conforming style to match with Toyota’s youthful image.

No attention to detail was overlooked and that applied to the bathrooms too, created with premium fixtures, colorful tilework, frosted glass stall dividers and recycled glass countertops below futuristic pendant lighting.
“Almost everything you see around you comes from Toyota corporate, every color, finish and material was previously selected by their design team at Gensler,” said Link.  “Efforts were made to use locally produced lumber and materials whenever possible.”

The Scion brand of entry-level vehicles is an intricate part of the dealership’s offerings and their space has been integrated into the floorplan to provide them with a distinct high-tech gadget feel and ultra-modern attitude more conducive to the youth market it serves.

“Scion is targeted to our younger buyers and so a separate area exists for its programs and displays,” explained Dufree.   “It’s the same trademark Toyota-Lexus quality at a reduced price.  This is really a dealer within a dealership feature of the broader operation.”

Something totally unique to a car dealership is the childrens play zone enclosed in glass beneath the main offices at the edge of the showroom floor.  Kids can amuse themselves with Xbox 360 and Playstation 3 video game stations and educational toys.

“We’re very proud of what we achieved in a very short amount of time and are quite pleased with the building,” said Gerard. “It was a great team effort with SunWest Builders.  It’s been a long hard push and to get it finished and have that pressure released feels incredible.”

The high-efficiency car wash uses 30 gallons of water per car, 24 of which are immediately recycled.  The remaining six gallons are treated on-site and do not impact the city’s wastewater treatment plant at all. This system will save approximately 475,000 gallons each year alone.

External sunshades provide architectural interest while adding to the cooling load of the entire building.  Concrete blocks used for the vehicle service areas were produced regionally using all local materials.
Highlighting not just the green component of the building design, but the necessity of a healthy work environment as well, the plans called for an expansive employee lounge and patio too.

Here employees can relax and congregate with a full kitchen and separate men’s and women’s lockers and showers equipped with energy efficient, tankless water heaters.

“Everything you do is USGBC regulated in Washington D.C. and certified so it’s a real check and balance process.  It was known from the get-go that this would be followed and so it makes the role of the architect engineer more difficult but also more interesting and ultimately a better building for the planet that will stand up for a long time to come,” Gerard said.  “My involvement began in Fall of 2009 with construction document work presented to the City of Bend building department in Spring 2010 after the project was put on hold in the depths of the recession.”

“When you’re thinking of a car dealership, it’s a combination of three distinct operations – one is servicing cars, second, the sales and showroom area and lastly the office component with its internal business functions.  Having it all under one roof is another distinctive aspect of the design.  Gensler provided expert guidance in every aspect and helped our people make sure we were compliant to the established corporate criteria.”

Nearly 90 percent of all construction waste was recycled, amounting to 52 tons of material diverted to an on-site recycling center.

“I’m very proud walking through here and seeing the level of grandness and quality in the design and am honored to have been a part of the team,” said Link, strolling back through the spacious showroom floor and lounge area.  “I always tell people – go down and take a look at it. The building reminds me of a modern performing arts center or concert hall, it has that sense of grandeur to it.”

Collaborating closely with Toyota’s Corporate Architect, Gerard, Link and combined staffs were able to seamlessly blend their talents to build a signature structure that not only falls within strict bureaucratic guidelines, but also exists as a dramatic piece of architecture as well, a triumph of inspiration, cooperation and green technology to be appreciated and utilized for years to come with minimal environmental impact.