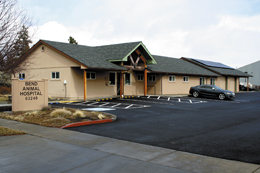 Bend Animal Hospital has much more room to stretch its hoofs and paws thanks to the new expansion by Bend contractor Gary Hughes.  The project nearly doubles the square footage of the structure, from 4,000 to 8,000 square feet and effectively integrates the existing footprint to maximize useable space.

Hughes was the original builder of the animal hospital ten years ago and worked closely with owner Dr. Stephen Pappa on how best to accommodate his staff’s needs in the remodel design process.

Bend Animal Hospital is one of the few veterinary practices left that treats and cares for both large and small animals.

“A decade ago, the clinic’s existing exam area used to be the equine room and the garage.  What we ended up doing is expanding it into an exam and surgery area,” said Hughes, leading us on a tour of the addition.  “This back area is now all his washroom for pre-surgery and post-surgery laundry.   There is so much more potential in this layout where you’re not so crowded.  We built a new kennel area that increased the dog runs from four to six and created a separate X-Ray room.  The staff now even has their own lunch room and kitchen to relax in peace and quiet.”

The latest Green technology was also incorporated into the blueprints with a new photo-voltaic solar system and solar hot water heating installed by Kelli Hewitt and E-2 Solar in Bend.

“This solar system will really help with the radiant-heated floors and domestic hot water,” explained Hewitt.  “Solar-electric modules installed in the roof will offset the electric bill by converting sunlight to power and the solar hot water assists in lowering their gas bill.  The 300-gallon storage tank is paired with a Navien Condensing Boiler, used as a backup heat source.  This supplies the hot water for the clinic’s laundry and wash facilities.  It also feeds hot water for the heated floors in the kennels to keep little puppy paws warm.”

The evacuated tube solar hot water system works on a vacuum process that allows higher temperatures with less sunlight.  It works better during the colder months due to the fact it doesn’t relinquish its heat value with the reduced light of winter.  There are also valuable financial rewards to be gained from such an environmentally friendly system.

“Pacific Power kicks in an incentive that helps buy the system cost down.  Then the federal government offers a 30 percent tax credit for the total system cost for renewable energy,” said Hewitt.  “So you’re looking at less than a five year total return of investment with this deal, plus all the additional energy savings it provides.”

Dr. Pappa commented on the latest remodel and the increased efficiency delivered by Hughes’ work.
“We had more multi-purpose rooms before and now this gives us some specific, dedicated areas,” Pappa said.

“This is a mixed animal practice designed for a smaller size and with the major client increase over the years it required us to operate in a bigger facility with more animal comfort and control.   When I first built this ten years ago we were one of the only businesses on our little street and now this zone is pretty full.   I can do a lot more horse work indoors in a controlled location.  I’ve already done surgeries this winter I would never have been able to do before and my staff is much happier.”

“The doctors can also park one of their vehicles back here to keep it out of the elements for those rushed winter farm calls so the space does double duty,” said Hughes.  “We added a covered parking area outside for the vet trucks and a steel holding pen for cows, horses, sheep, goats or any large animal.”

Exterior walls were all constructed out of ICF (Insulated Concrete Forms) that become an R-50 insulation value when filled with concrete and steel.

“It makes one heck of a building,” Hughes said.  “It’s extremely quiet and really holds in the heat.   We applied stucco to the outside walls with the idea of low maintenance and not having to paint it.   The building is utilitarian in design and function, but even with the simple style, the building really works.  We’re not trying to win any architectural design awards with it, but tried to given it a clean look with maximum efficiency, and over time, contributing to the ecology of the area by cutting down on his power usage in every way possible.

“This remodel, first and foremost, increases productivity for Dr. Pappa, Dr. Lynne Brown, and their entire staff.  It lets them have the proper space to service all these animals.  They were cramped to the point where animals were sometimes in kennels behind desks, in offices and stacked in the restroom.  Not anymore. They’ve updated many of the internal features as well, with a new oxygen systems and operating areas.  Everything is brand new.  All these things make them much better vets than before.”