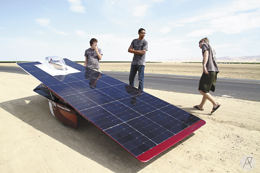 T.Wesley Ford sounds like the ideal name for a Stanford University student working on a revolutionary solar electric automobile.

Ford, a 2009 Sisters High School graduate and class valedictorian, unveiled his team’s space-age vehicle, Xenith, on August 11 at the Volkswagen Automotive Innovation Lab on campus.  His team recently competed in the grueling 2011 Veolia World Solar Challenge, racing the sun-powered creation 3000 kilometers across the barren badlands of Australia from Darwin to Adelaide.

Ford’s official title with the team is financial manager but he also contributes to fundraising and media relations with blog entries and updates for the project website.

“I’m pretty excited for the race,” said Ford.  “We had over 200 people in attendance for the debut and nearly 30 news reports about the event and the car.  Last month, the car went by ocean freight in a custom shipping container to Melbourne, Australia where they will pick up the car.   In September, we drove to the start of the race in Darwin which allows us to do more testing and tweaking to optimize it for driving inthe outback.”

The Stanford Solar Car Project is a student-run, donation-funded project that has been building and racing solar-powered vehicles since 1989.  The goal of this environmentally friendly, cutting edge band of future green engineers is to build a car from scratch that runs completely on solar energy.  Both undergraduate and graduate students from all disciplines can join the group regardless of experience.

Xenith itself is made out of carbon fiber, titanium and aluminum and weighs about 375 pounds altogether, not including the driver.

They designed the cockpit compartment of the vehicle around one of the smallest members of the team, Rachel Senichel, and there are only two other drivers short enough to fit inside.

“We built an incredibly thin and light carbon fiber aero body,” Ford explained.  “Our glass solar panels have brought multiple industrial prototype technologies together to make one of the most efficient arrays the world has seen.   Its three-wheel steering and first multi link suspension will give us a competitive edge in Australia.  Our battery pack and electronics are ultra compact and efficient. The motor and driver controls bring everything together to make Xenith an impressive race car.”

The fastest Ford’s team has driven the car so far is 70-mph and he knows it can go faster but can’t break any California laws in an experimental vehicle.  This year, the bi-annual World Solar Challenge race comes to the wild lands of kangaroos and koala bears.

The way the race is organized, racing stops every day at 5pm, regardless of where you are.  You camp for the night on the side of the road and start up again at 8am the next morning.  This year more than 40 teams from all over the world have signed up.  Stanford has never won the World Solar Challenge but won the North American Solar Challenge from Austin, Texas to Calgary, Canada in 2005.

“When our team designed this latest car we were really ambitious and a lot of those decisions have paid off.  We’ve built an extremely fast car,” he said.  “We hope this may be the first year since ‘87 an American team will win the World Solar Challenge.  That would be awesome.”

The race will be held from October 16-23 and 20 of the 30-member team will make the long journey to The Land Down Under.  Safety checks and qualifications began October 12th where they confirmed cars are safe enough to drive on the highway, can stop safely and make sure the cars can operate at maximum highway speeds for a two-thousand-mile race.   Most teams finish in four to five days but are allowed up to seven to finish.  One of the team members will be filming a detailed documentary about the Xenith as well.

Having made the long journey from Darwin and navigating quarantine, customs, safety inspections and event briefings, participants are finally primed  to start their epic journey across the continent.   The event is conducted by a capable staff in a single arduous stage from Darwin to Adelaide.

During the race there are seven mandatory check points where observers are changed and team managers can update themselves with the latest info on weather conditions and their own position in the field.    Teams are allowed to perform the most basic of maintenance only – checking tire pressure and cleaning dirt and debris from the solar vehicle.

There are also undisclosed surprise checkpoints which may be imposed by the event staff to ensure strict regulatory compliance.

October 12-14 team members were registered, drivers weighed and the solar cars presented to the official league of “scrutineers” for inspection and confirmation of their vehicle for rules compliance and structural integrity.   Entered vehicles will be progressively dismantled for inspection and reassembled in a ‘production line’ process directly on the intense scrutineering floor.

Saturday, the solar odyssey begins.  May the sun shine brightly.

“Being able to be involved in such an international project has been amazing,” said Ford.  “Even though I came from a small town like Sisters, there are so many opportunities out there once you see the world and what’s available to you.  This race truly draws attention to the incredible potentials of solar energy and the limitless creative possibilities

For more information and race results, visit Ford and the Stanford Team at solarcar.stanford.edu.