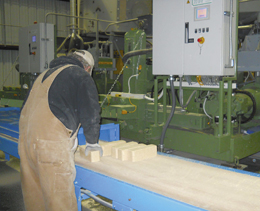 Speaking at a regular meeting of the Rotary Club of Greater Bend, Daucsavage, president of the Prineville-based timber holding company, outlined how biomass initiatives were one of the ways of continuing economic viability in an industry with a dwindling number of operators left standing.

Ochoco Lumber was established in the 1920s and has been cutting saw logs for over 70 years, but the wood products business has been battered by a variety of factors in recent history, including declining harvests, the housing slump and the recession.

Daucsavage said his company had explored ventures far and wide in a bid to fill the economic void, and he had visited some 27 different countries, including Lithuania and Russia, to that end, adding that building wood pellet fuel facilities utilizing “woody biomass” or forest residue, were a bright spot in the overall picture.

“Part of the problem is that there are not many saw mills left operating, and in the majority of federal owned land, through policies and special interest groups, forest fires have been suppressed creating an entangled environment.

“Our mission statement states that we are committed to sustainable management which improves forest health, protects wildlife and enhances our natural resources for future generations.

“We sought willing partners and are happy to say that we have found them, and discovered there were communities looking to collaborate to come up with local solutions to break the gridlock.

“The forest service has also come around. We have been running out of time but a coalition of groups is finally coming together in seeing the way we can keep going.

“We’ve all gone too far in one direction and now are focusing on a cooperative path that can promote jobs and environmental health in the long run.”

Daucsavage hailed groups such as Blue Mountain Forest Partners – a collaborative collective comprised of diverse interests who have come together to advance a collective mission to enhance forest ecosystem health, economic opportunities and public safety on and around the Malheur National Forest in the John Day area of Grant County.

On a state level, he also lauded efforts being spearheaded by Governor Kitzhaber and his new Federal Forest Implementation Working Group, which has been formed to actively promote community-based collaboration and addresses obstacles to achieving forest health and sustainable forest management.

One of Ochoco Lumber’s recent success stories in the arena has been the construction of a wood pellet fuel facility in John Day via their offshoot in that area, Malheur Lumber Company, with the help of a $4.9 million economic recovery grant from Business Oregon.

The grant, funded with federal stimulus dollars, created 11 new jobs and retained 80 positions at the Malheur sawmill operation. The plant processes about 30 million board feet of ponderosa pine annually, down from some 50 million board feet in its heyday.

“Without this initiative, we would have had a concern about being able to continue to run the operation,” said Daucsavage. “Now, we have the ability to make a multitude of different products, which makes us more competitive and gives us a better opportunity to retain jobs.”

The new facility has a drying system and two pellet-making machines at the site, with production estimates of up to 40,000 tons annually, using woody biomass from surrounding national forests as the raw material.

Ochoco has partnered with Bear Mountain Forest Products, a Cascade Locks company, to market the resulting pellets and compressed bricks to hospitals, schools and other commercial buildings in the region that are heated by boilers.

Daucsavage says the hope is to increase output at the pellet facility in the longer term and add even more jobs, all while helping to manage the surrounding woodlands wisely.

“We have a lot of responsibility and a lot of exposure, but we want to do it right and this was a great opportunity,” he said.

The facility utilizes biomass harvested from private lands as well as nearby U.S. Forest Service and Bureau of Land Management lands.

The plant produces pellets for bulk delivery to fuel pellet boilers in hospitals, schools and other commercial and government buildings in the region. The company also hopes to significantly increase production by providing fuel pellets to large industrial users such as utility companies.

Biomass is dried, sized into smaller pieces and then pelletized or briquetted before firing. The product is somewhat on a par with natural gas in terms of heating fuel cost comparison, but comes out significantly cheaper relative to electricity and has gained favor in areas without gas utility options.

Daucsavage said pelletization combines a high concentration of energy with easy handling, reduced transportation cost and hassle-free storage, to produce a low-moisture fuel with good burning characteristics for commercial and domestic use.

He added, “These compressed bricks and pellets produce relatively cheap and efficient thermal solutions, which burn very hot and have low carbon emissions.

“Our pellets are being used in schools, including the Sisters district, and hospitals, such as the Blue Mountain hospital in John Day, which claims it is saving some $65,000 a year in electricity costs by converting to compresses products for heating needs. We are seeing demand growing, including from overseas in places like Japan.

The Working Group includes federal, state, and local government entities, as well as industry, community groups and conservation organizations, and it is one of the Governor’s Oregon

“We need more collaborative projects like this to ensure the health of our forests and timber economy – and make sure what’s happened in Arizona does not occur here,” said Kitzhaber, referring to the wildfires in the Southwest and the loss, over time, of the region’s timber industry.

“Despite well-known, challenging issues related to federal forest management, Oregon communities have put themselves on a new, collaborative path to finding common ground, and that hard work is now being properly recognized through a program that creates and retains jobs while restoring the forests and watersheds around those communities.”

“Accelerating the work of local collaboratives is a priority path to increasing the health of our public forests, our economy, and our local communities, and I’m proud to see Oregon recognized as a national leader and innovator.”