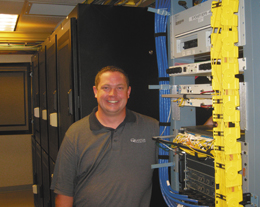 Central Oregon is in the midst of an expansion in the communications and technology industry, and Quantum Communications is proactively paving the way for future growth. The Redmond based company has seen the rise and success of data centers like Facebook, Apple and the newly announced Navigata, and is dedicated to providing the essential infrastructure for these economic boons to the area.

“It is very exciting to be in an industry that is contributing to the growth of Central Oregon,” commented Larry Andrews, director of sales at Quantum. As one of the members of Quantum’s founding team in 2001, Andrews remembers a time when communications capacity was referred to in the megabits; today, gigabits. “Our network and its capacity has grown tenfold,” he continued. “Data centers all rely on cost effective, reliable communication services, and that is at the core of what we do as a company.”

Quantum Communications’ roll in Central Oregon is delivering cutting edge data services to local businesses, hospitals, banks, government agencies and ISP’s through a set of products including: Ethernet Everywhere, IP, TDM, SONET and Wavelength services. With a team of 11 employees and founding support from Central Electric Cooperative, an extensive fiber plant, carrier interconnects and access to over 2,200 miles of regional fiber, services can be delivered locally and across the Northwest.

“We are ramping up for the next phase,” said Andrews. Growing to meet the needs current and future data consumption has Quantum ready to make the leap from a data rate of 10 gigs per second to 100 gigs per second.

A faster data rate goes hand-in-hand with what Andrews calls “an absolute race between the cellular companies.” Providing cell phones and tablets with 3G and 4G services all requires data transportation. Working closely with cellular providers, Quantum is increasing bandwidth to towers, helping to bring faster, better and more reliable services. “The whole concept of cellular data will only grow; downloading movies, voice, etc. all continues to grow,” he said.

Technology research and advisory company, Gartner Inc., expects the revenue from the cellular industry to grow from $81.4 billion in 2011 to $151.9 billion in 2016 with data revenue expanding to take over 65 percent of the wireless market, voice declining to 35 percent. With communications companies scrambling to keep pace with the advancement of technology, forecasting future needs has become an integral part of Quantum’s business model.

“The way the industry is going will change the way people view entertainment,” Andrews said. “IPTV is coming down the pipeline, and we see that as a huge area in the market that will have broad level acceptance.” The future of IPTV will be interactive, much more interactive than a typical broadcast or even DirectTV, he explained.

Currently classified in three groups: live television, time-shifted television and video on demand, the Alliance for Telecommunications Industry Solutions explain that “IPTV services are delivered across  an access agnostic, packet switched network that employs the IP protocol to transport the audio, video and control signals. In contrast to video over the public Internet, with IPTV deployments, network security and performance are tightly managed to ensure a superior entertainment experience, resulting in a compelling business environment for content providers, advertisers and customers alike.”

For a company like Quantum, it means IPTV will rely on data transportation in and out of the area. “We are excited to participate; it will change how we work, learn and play,” exclaimed Andrews.

With a busy and bright future, growth both realized and anticipated, Quantum expects to be growing their staff along with the economy in Central Oregon.