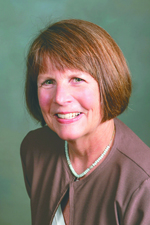 “The typical employment span of a non-profit’s executive director is four years,” Bill Moseley, Opportunity Knocks’ board chair said. “Meanwhile, Susie has led Opportunity Knocks for ten years. In the process, Opportunity Knocks has become a household word within the Central Oregon business community. Two hundred and twenty businesses, their employees and their dependents, currently owe a part of their business success to Susie and her efforts.”

In addition to her ten-year tenure as executive director, Stevens has been associated with Opportunity Knocks for an additional five years. She was an original member of one of Opportunity Knocks’ first six teams when the organization was founded in 1996. She later started facilitating a team and continues to do so today. Five years later, in 2001, Stevens was appointed executive director and she has led the organization through multiple stages of developmental growth ever since.

“The timing is right,” Stevens stated. “The recent loss of my mother has made me reappraise my outlook on my future. I also believe the timing is right for the organization. My leaving is bittersweet, I’ve loved Opportunity Knocks since the day I first joined a team, and the impact Opportunity Knocks has made on so many small businesses and the people that depend on them has been a huge motivator for me. I’ll miss the energy, and the accomplishments, of our members.”

“I’ll do whatever I can to make the transition seamless,” she continued. “I’ll also continue to facilitate the one team that I have been with for many years.   My OK blood runs deep.”