You are at:Home»News Pages»E-Headlines»Colfax Tactical Relocates to Redmond to Make Firearms
By CBN on June 28, 2012 E-Headlines 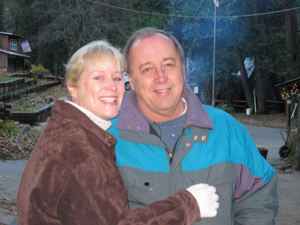 With Independence Day looming and fireworks bursting on the horizon, the right to bear arms is all in a day’s work at Colfax Tactical in California, forging 80 percent completed lower receivers for AR-15 rifles. Owners Larry and Karen Myers are aiming the operation straight for the heart of Oregon as they complete their relocation to Redmond later this July. Story by JEFF SPRY

“We spent years in the scientific manufacturing community building large astronomical telescopes for the science industry and we decided we were going to change directions,” said Larry. “Both my wife and I wanted to go after something we really enjoyed, firearms.”

Colfax provides high-grade receivers made of mil spec-forged 7075 aluminum, machined to the point that a person with a modest home shop and average skills can complete it in a day or two. This forging process is the same forging most of the major AR-15 providers use.

“All firearms, from a federal standpoint, are legally only the lower receiver and trigger. Oddly enough, the rest of the gun, the barrel, the upper receiver, the bolt and buttstock can be purchased without restrictions or paperwork through the mail.”

With an 80% receiver, it can be purchased and legally finished at home by an individual to make it into a complete working gun.

“We call them “paperweights” to signify that it’s not technically a gun,” he explained. “Until they’re 100% machined that is really all they are, a hunk of metal. The last 20% has to be completed by yourself. The intent must be for you to build the firearm for your own personal use and not your girlfriend, wife, or grandma, assuming you are legally allowed to own a firearm. And they must be built in total compliance with your local ordinances. Oregon is a lot easier than California and allows such things as high-capacity magazines.”

Larry and Karen advertise themselves as being a veteran-owned, small family business. Colfax Tactical started doing these receivers three-and-a-half years ago and the response has been outstanding.

“Coming from a background of science, in terms of exacting measurements and the precision necessary to create telescopes, these AR-15 receivers are pretty forgiving by comparison.”

To remain viable on the internet, the Myers are going to keep the Colfax Tactical presence because of their reputation and name recognition in the competitive world of 80-percenters.

“Plus we will be opening a full retail store in Redmond near the fairgrounds, called Redmond Black Rifle, which will be both manufacturing for Colfax Tactical and our walk-in emporium open to the public. We plan to offer upper assemblies, retail kits, cases, triggers, custom buttstocks and all AR-15 and .308 accessories.”

“We want a down-home feel for our business in Central Oregon, with a friendly Midwest way of dealing with people by delivering a high level of customer satisfaction. The enthusiasm for our relocation to Redmond is as overwhelming as the surrounding Oregon landscape.”

Redmond Black Rifle will also be applying for their Federal Firearms License for retailing completed rifles.

“We’re not interested in becoming Joe’s Gun shop with a lot of hunting rifles and pistols but want to be strictly black rifle and or tactical oriented.”

This month, Colfax Tactical takes to the highway with all trucks and vans traveling north to the Beaver State.

“Friday the 13th of July is our big move day and I expect it will take us at least three weeks to get all settled in,” he said. “We’re bringing up an entire shop with computerized milling machines allowing us to continue to manufacturer our fine 80% lowers. That’s our bread and butter. Typical customers are 35-60 year-old males that may or may not have used an M-16, the military version of the AR-15, and like the whole tactical thing going on. We do get a lot of younger guys and gals who are getting into the sport and l see that segment of our customer base increasing pretty fast.”

According to Myers, the entire AR-15 platform is mil spec’d, meaning different manufacturer‘s products will all fit with uniform dimensions across the model’s spectrum. In his opinion, they’re like a Barbie for men.

“We picked Redmond because it had everything we looked for,” he said. “One major factor was Jon Stark, the Redmond Economic Development manager for EDCO. He was incredibly helpful when we met eight months ago with the Redmond mayor and police chief. It was an incredible, open-arms welcome from those guys. Unlike California they didn’t cringe at the sight of a gun-builder.”

Part of the long range Myers’ plan consists of implementing a local hiring campaign, looking for the right individuals to bring on board.

“There will be no employees following us from California,” Larry said.   “We will only be hiring locally. We are so jazzed to see California in our rear view mirror and that’s the truth. We only wish we were moving sooner and already there in Oregon. It’s the right place to raise our 5-year-old son, Logan, and we are excited with our decision to come to Central Oregon and do some great business together.”

Redmond Black Rifle will have an open house and grand opening sometime in August after their relocation is complete.   For more info please go to redmondblackrifle.com or call 530-346-2000.