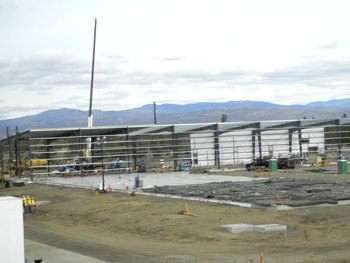 Step inside the massive Building 2 at Facebook’s campus and it feels like you’ve left Prineville for just a moment. But make no mistake – the impact of the two aircraft carrier-sized buildings on the region – both economically and culturally – has brought this former strictly lumber-based town fast forward into the future.

“The impact of Facebook on the community has touched every aspect of who Prineville is,” said Steve Forrester, city manager, who formerly was general manager at Woodgrain Millwork Inc. in Prineville. “Whether that impact has been in full-time jobs or ancillary jobs such as landscaping, HVAC, construction – whatever. Facebook has brought in a new and very exciting industry to our town.”

The company’s impact, along with the construction of a similar-sized Apple data center nearby, is being felt dramatically in , where unemployment reached 18.6 percent, the highest in the state, during the depths of the recession. Unemployment has dropped steadily to 13.3 percent in the latest seasonally adjusted figures, according to the Oregon Employment Department.

An economic impact study of Building 1 released in January 2012 by Portland-based ECONorthwest found that Facebook had a $24.4 million economic impact, including $9.2 million in personal income and 234 jobs.

“It has brought hundreds of construction jobs, but also had an effect on mom and pop restaurants, lodging companies, and even the suppliers such as Miller and Parr Lumber,” Forrester said. “Metal fabricators have been busier. The airport has been busier. The ramifications have been huge.”

Business is brisk at the Executive Inn on in east Prineville where a marquee sign welcomes Facebook and Apple employees. Overnight lodging has increased more than 30 percent at the hotel over the last year, mostly due to the data center construction projects, said John Beach, manager.

The hotel’s 10 kitchenette units are typically full, Beach said, noting that 95 percent of the occupants are data center construction workers.

Since construction started on the first building of the Facebook data center in 2010, roughly 2,700 people have worked at the construction site with about 50 percent coming from , according to Facebook. Roughly 250 construction workers are at the site on average every day.

The data center currently employs more than 60 full-time Facebook and contract employees with a payroll of $3.3 million, according to the company.

Out of the Facebook workers, at least three are former employees of , which moved its headquarters to in 2008. Additionally, the company’s entire data center repair team is from Prineville, said Joshua Crass, the data center’s manager.

“They grew up here and have lived here their entire lives,” Crass said.

The company also has been working closely with schools and the community, donating $100,000 to for technology improvements and $82,000 to the Crook County Foundation for economic development efforts Wednesday. Last summer, Facebook also invited two local high school students to intern as server technicians.

“They were up-to-speed in three months,” Crass said. “They had become valuable technicians by the time they left.” 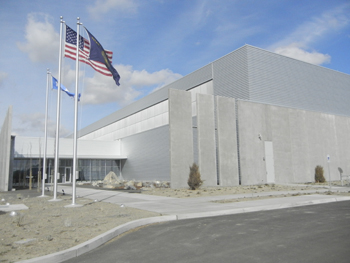 Security is tight at the Facebook campus off of Prineville, but once inside, the mood lightens with an employee pool table, beer on tap and views of the and the high desert.

The company opened up one wing for a media tour Wednesday of Building 2, its still-under-construction 333,400 square-foot data center that mirrors Building 1 and is slated for completion by July.

The building consumes 52 percent less energy and 70 percent less water to operate than a typical data center, according to Facebook.

Construction crews from Portland-based DPR-Fortis, which is the general contractor for the project, also are at work on an auxiliary 62,000 square-foot “cold-storage” building, where the social networking giant will store up to 3 exabytes of data from rarely accessed pictures on the site.

An exabyte of data is roughly equal to 1 million gigabytes, or enough to store a large portion of the world’s 240 billion photos stored on Facebook, which handles roughly 350 million photos every day.

While much of the impact has been local, the technology fueling the data center has a edge to it.

Efficiency begins with its custom-built servers, a group of computers that are linked to the World Wide Web.

The servers use 38 percent less energy and can operate at higher temperatures to reduce mechanical cooling needs, according to Facebook.

The Prineville facility also features an evaporative cooling system and airside economizer, which takes advantage of the cool air coming off the high desert and circulates it through its building. It uses a range of filters, fans, and deflectors to mix, guide, and generate hot or cold air and spread it evenly throughout the building.

Traditionally, heat comes off the servers and has to be cooled by a chilled water and condenser water system, Crass said.

“Now, we’re taking the heat out of the building,” said Crass, explaining how cold winter air mixes with heat from the machines to set the correct temperature in the building. “We’re trying to be as efficient as we can. The building adjusts to the temperature as needed.”

The building’s efficiencies were noted in a Dec. 2011 Wired magazine story, which cited the Prineville facility for having a “power usage effectiveness” ratio of between 1.06-1.08.  A PUE of 1.00 means that all the power consumed is being used to run the servers, according to Crass. By comparison, most data centers have a PUE of 2.0 to 3.0, according to Facebook.

“This just means we’re not wasting our energy on lights and cooling the servers,” Crass said. “We have super efficient fans that do the work for us.”

Hover on photos to see caption