You are at:Home»News Pages»E-Headlines»City of Redmond Hosts Public Open House to Discuss Future of the Old Redmond Schoolhouse
By CBN on December 10, 2013 E-Headlines

A public open house to discuss the future of the Old Redmond Schoolhouse is scheduled for Wednesday, December 11, 4–6 pm, at Redmond City Hall, 716 SW Evergreen Avenue. 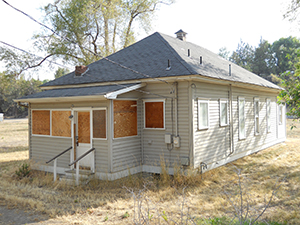 Redmond City Council is seeking public input on whether or not to retain the structure in public ownership or to offer it to a private developer who is interested in relocating it to its original historic neighborhood, preserving it and utilizing it as housing.   The Old Redmond Schoolhouse is a boarded up building in the City of Redmond’s Dry Canyon park located at the Dog Park off of Black Butte Avenue, 1429 Antler Avenue.

Owned by the City of Redmond since 2007, the City has been in dialogue about what to do with the structure for over six years. In 2011, it was identified to be demolished or relocated.

Recently it was discovered that it was built in 1905 and either is the oldest building in Redmond or one of the oldest buildings in Redmond. Recognizing the historic significance of the structure, the Redmond Historic Landmarks Commission asked the Redmond City Council for some time to research alternative options for the structure prior to demolition.

The landmarks commission did some research and discovered its age and original use as a schoolhouse for homesteaders in the area. Frank Redmond served on the board of directors. After use as a schoolhouse, it was converted into an office and dwelling unit. Originally located on the corner of F (Forest) Avenue and Seventh Street, it was relocated to its present location in the Redmond Dry Canyon in 1976 to preserve it from demolition. It was used as a dwelling until the City of Redmond purchased it in 2007.

An architectural assessment in 2012 indicated that it would cost approximately $125,000 to preserve the 1,000 square foot building for future use. With no public funds set aside for the preservation of the building, the Redmond Historic Landmarks Commission struggled to find an interested party in saving the structure. In May 2013, after several articles in the newspaper, a private citizen offered to buy it for $1.00, relocate it back to its original neighborhood, preserve it as a house, maintain it as a Site of Historical Significance for the City of Redmond, putting it on the Historic Homes Walking Tour Brochure and hosting a public open house after its restoration.

The Redmond Historic Landmarks Commission recommended this proposal to the Redmond City Council who hosted a public hearing to consider surplusing the structure and the proposal on November 12, 2013.

Due to the significance of the historic structure, the Redmond City Council would like to host a public open house to ascertain if the public is interested in keeping the structure in public ownership and investing in the restoration of the building or if the public is interested in selling it to the private sector to retain as a historic home in Redmond.