You are at:Home»News Pages»E-Headlines»Three Creeks Crewing Brews Up for New Production Facility
By CBN on June 19, 2014 E-Headlines 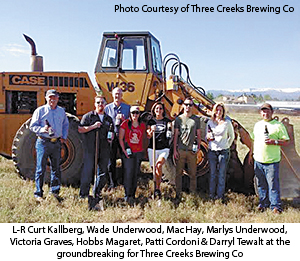 Company stays in Sisters solidifying their position as a major player in the area’s bonanza of nearly two dozen regional hand-crafted beer facilities. Anticipating a thirsty future, Three Creeks Brewing Co. is vastly expanding its territory by breaking ground on a new production facility in the Sisters Industrial Park.


The expansion, in the works for the past three years, will allow the popular local micro-brewery to significantly raise their production capacity and serve the burgeoning craft beer market in Central Oregon and the entire Pacific Northwest.

Owner Wade Underwood sees this move as a vital component of his company’s commitment to the region’s bountiful brewing industry. This key growth factor helps keep Three Creeks in Sisters instead of Redmond or Bend and solidifies their position as a major player in the area’s bonanza of nearly two dozen regional hand-crafted beer facilities.

“We finally got to break ground and I’m pretty excited about it,” said Underwood.  “I’ve been working on it for quite a while, since probably back in 2011. Overall, the city and council was great to work with and there were some pretty serious challenges to be dealt with for a big production-sized brewery.  We had to make sure that everything is workable and it is.”

Since opening at Sisters’ FivePine Campus in 2008, Underwood has seen an upwardly spiraling market in Central Oregon, from boutique distilleries and cider houses to runs of new micro-brew companies sprouting up nearly every month.

“The playing field out there has definitely gotten very competitive and we need to keep up.  We’re committed to the quality of our craft and the ongoing craft beer movement in the region.  Our ability to grow has been limited only by our footprint here at the brewpub for the past two years and we’re going to unleash additional production capacity with this plant to continue the growth of our brand.”

This initial phase of the project is due to be completed by the end of 2014 and provide jobs for five full-time workers, with the final build-out finishing up in the first quarter of 2015 when the facility will be pumping out a potential 20,000 barrels a year.   Employment numbers may reach 15-20 workers at full capacity.  In addition to ramping up volume in draft kegs, Three Creeks will also be expanding their 22-ounce styles and launching six-packs of 12-ounce cans as well.

“We’re using all local contractors whenever possible, with Curt Kallberg acting as the general contractor and the “push-out” site excavation work being done by Tewalt and Sons,” he said.  “And our metal building is being manufactured by Pacific Building Systems right out of Portland so we’re buying local wherever we can, in addition to our brand new brewing system by Metalcraft Fabrication.  We funded their startup effort back in 2009 and we’re happy to be going back to buy a full system from them.”

Underwood is relieved and thrilled that the first step in the expansion is underway and anticipates a smooth construction and installation of the new state-of-the-art equipment.
“We appreciate the ongoing support of all the citizens and Three Creeks fans that have helped us along the way and we look forward to an even bigger and brighter future.”

Location:/Website: 721 S. Desperado Court in the FivePine Campus in Sisters, OR 97759