You are at:Home»News Pages»E-Headlines»Win Tickets to See Doris Kearns Goodwin in Portland
By CBN on June 24, 2014 E-Headlines 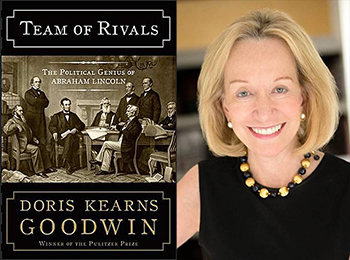 Renowned historian Doris Kearns Goodwin is coming to Portland and the Des Chutes Historical Museum has two tickets to win.

This epic work illuminates Lincoln’s political genius, as the one-term congressman and prairie lawyer rises from obscurity to prevail over three gifted rivals of national reputation to become president. The lecture takes place at the Newmark Theatre, 1111 S.W. Broadway in Portland.

Raffle tickets are $5 each or 5 for $20 and can be purchased at the Museum. The winner will be selected following 4th of July celebrations at the Des Chutes Historical Museum.

Goodwin is the author of six critically acclaimed and New York Times best-selling books, including her most recent, The Bully Pulpit: Theodore Roosevelt, William Howard Taft, and the Golden Age of Journalism, (November, 2013). Goodwin is well known for her appearances and commentary on television, where she is seen frequently on NBC, MSNBC, CBS, ABC, FOX, CNN, The Charlie Rose Showand Meet the Press.

Goodwin earned a Ph.D. in Government from Harvard University, where she taught Government, including a course on the American Presidency. She served as an assistant to President Lyndon Johnson in his last year in the White House, and later assisted President Johnson in the preparation of his memoirs.

Goodwin resides in Concord, Massachusetts, with her husband, the writer, presidential advisor, speechwriter and playwright Richard N. Goodwin. She was the first woman to enter the Boston Red Sox locker room, and is a devoted fan of the World Series-winning team.