May ushered in strong hiring across the high desert with all three counties posting seasonally adjusted job gains. Although hiring was concentrated in seasonal businesses, jobs were added across a wide variety of industries and ownerships. There was no significant change to local unemployment rates from April, similar to the national and statewide trends.

Crook County: Seasonally adjusted unemployment levels in Crook County continue to slowly decline, down to 10.6 percent in May from 10.8 percent in April. The unemployment rate is down nearly two percentage points from May 2013 when it was 12.5 percent.

Total nonfarm employment rose by 170 jobs in May, a larger gain than the 100 jobs typically expected this time of year. 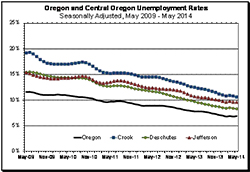 Monthly gains were nearly split between the private and public sectors. The federal government posted the largest gains (+50) as land management agencies ramp up seasonal hiring. As expected, leisure and hospitality posted solid job gains (+40) in preparation of the summer tourism season. No industry posted significant job losses in May.

Employment levels are up 2.3 percent or 130 jobs compared to last year. Most of this growth can be attributed to gains in wholesale trade and educational and health services, each gaining 60 jobs from May 2013. Professional and business services was the only industry to post a notable decline from last year (-20).

Preliminary estimates from the federal Bureau of Labor Statistics (BLS) for the Bend metropolitan area show an increase of 1,020 jobs in May, which is greater than the gain of 740 jobs typically expected this time of year. Monthly hiring was once again reinforced by seasonal industries, such as leisure and hospitality (+270); retail trade (+270); and mining, logging, and construction (+140). Hiring was not limited to these seasonal industries as significant job gains were seen across almost all major industries.

Job growth continues to track closely with the state, up 2.3 percent from May 2013 or 1,490 additional jobs. Three industries account for well over half of all jobs gains gained in the past year; educational and health services (+360); local government education (+280); and retail trade (+180). Smaller gains were seen across most other industries with the exception of professional and business services and financial actives, each losing 30 jobs from last year.

Jefferson County: Seasonally adjusted unemployment levels remained unchanged in Jefferson County, posting a rate of 9.6 percent in May. The drop from May 2013 (10.7%) is statistically significant.

Jefferson County gained 220 jobs in May, significantly more than the typical gain of 120 jobs this time of year. Employment gains were concentrated in leisure and hospitality and Indian tribal government, each gaining 60 jobs. No industry posted job losses from April.

Employment levels are essentially unchanged from this time last year with the private sector gaining only 20 jobs. Manufacturing continues to show strong growth (+80 jobs), however these gains were nearly matched by significant losses in educational and health services (-40) and professional and business services (-20).

These estimates will be revised as new data from businesses becomes available. The next Central Oregon Employment Situation with preliminary data for June 2014 will be released on Monday, July 21st.