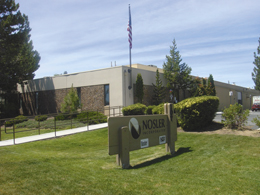 Nosler Public Relations Manager Zach Waterman said the acquisition of the property, adjacent to the company’s current headquarters at 107 SW Columbia, was made as a strategic move in anticipation of the future growth and expansion of Nosler, Inc. during the coming years.

Having expanded the workforce to over 130 employees in the current year, Nosler has outgrown the present facilities and the additional space will allow the company to reorganize the plant layout, allowing for greater efficiency and capacity.
With the purchase of the Bus Barn building, Nosler will have approximately 80,000 square feet of space under roof.

Purchasing the property will also allow Nosler to expand in the short term while preserving the option to build on the northern section of its current property in the future.

“We are very pleased to have acquired the property next to our current facilities as it will allow us to continue to expand, while creating more jobs for Central Oregonians,” said Bob Nosler, president and CEO of Nosler, Inc.

County records indicate that the 115 SW Columbia Street property, which includes around 20,000 square feet of Light Industrial Zoned buildings on approximately two acres of land, was purchased for $1 million by Nosler Investments, LLC from Mt. Bachelor Inc. on June 8, 2012.

Waterman added that the move was reflective of the growth and diversification of the company’s product line over the last several years in a number of areas, including custom rifles, new bullet technology for hunting and competitive shooting and partnerships with other Original Equipment Manufacturers (OEM’s) in the industry.

Mt. Bachelor Director of Marketing and Communications Andy Goggins said the move to sell the property was precipitated by the conclusion of a new arrangement with Cascades East Transit last fall – with the help of a federal transportation grant – to deliver transport to and from the ski resort area, which eliminated the need for the bus barn storage and warehouse facility.

He added, “Nosler expressed interest in the property several years ago if we ever considered selling, so it was a win-win situation in helping accommodate expansion of a great local company and us having a logical buyer for a property that became surplus to requirements.”

Goggins said that the sale would allow investment in the construction of a new administration building at Mt. Bachelor’s West Village, staff having been housed in a temporary structure there for several years.

He added that Mt Bachelor was also in the process of selling the old bus fleet and anyone interested should contact resort administration at 800-829-2442 or info@mtbachelor.com.

Founded in 1948 by John Nosler, who sold the production facilities to his son in 1988, Nosler, Incorporated is a family owned company.

Nosler is most known for revolutionizing the hunting bullet industry with bullets such as the Partition, Ballistic Tip, AccuBond, E-Tip, Ballistic Tip Lead Free and Varmageddon.

The current plant was renovated last year after an explosion damaged a corner of the plant.