You are at:Home»News Pages»E-Headlines»Oregon Minimum Wage Increases, Though Not Enough for Economic Security according to Oregon Center for Public Policy
By CBN on September 23, 2014 E-Headlines

Oregon’s minimum wage will edge up 15 cents per hour next year to keep up with the rising cost of living. Though welcomed, that increase is not enough to provide families a basic level of economic security, according to the Oregon Center for Public Policy.

The new $9.25 an hour minimum wage announced today by Bureau of Labor Commissioner Brad Avakian, set to take effect on January 1, 2015, means an extra $26 per month for a full-time worker earning the minimum. The change is the result of a ballot measure enacted by voters in 2002 tying the minimum wage to inflation.

“Today’s economic reality — rising income inequality and too many working families living in poverty — speaks to the need to go beyond cost-of-living increases,” said Janet Bauer, a policy analyst with the Center. “While Oregon voters were wise in tying annual adjustments to inflation to make sure that our lowest-paid workers don’t fall further behind, we need a minimum wage increase that makes forward progress.” 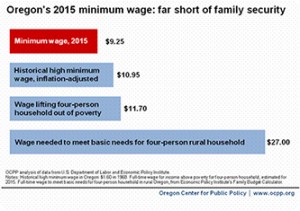 Even with the annual increase, Oregon’s wage floor will remain below its historical high. In 1968, the federal minimum wage was higher than Oregon’s minimum wage, so the federal wage set the floor. If the minimum wage had kept up with the cost of living since 1968, it would stand at $10.95 next year, Bauer said.

Another indication that the minimum wage is too low is to compare it to the official definition of poverty, according to Bauer. In 2015 it would take at least a minimum wage of about $11.70 to lift a family of four with one parent working full-time out of poverty. This figure is based on the Center’s estimate of how much the federal poverty guidelines are likely to increase next year.

Yet another way of assessing the minimum wage is to consider the level of income needed to provide families a basic level of economic security. “The official definition of poverty really measures serious economic privation, not basic needs,” Bauer said. A better measure of how much income families need for a modest, yet secure standard of living is the Basic Family Budget Calculator created by Economic Policy Institute.

For a two-parent, two-child family living in rural Oregon, it takes a full-time wage of about $27 an hour to makes end meet, according to the basic budget calculator, which does not include money for savings. The figure is higher for families living in the state’s urban areas.

“Oregon’s minimum wage is below what it takes for a family with children to meet their basic needs,” Bauer said. “The time is right for Oregon to substantially lift the wage floor to increase families’ economic security.”