Earnings for the fourth quarter were similarly as strong with pre-tax fully diluted earnings per share of $0.47, an increase over the 4th quarter of 2017 of $0.17 or 58 percent.  dxdddddddd “Our outstanding growth in loans and deposits was the reflection of the strength of our current clients who also had successful years, as well as Summit’s ability to add significant new banking relationships during 2015”

Tweet this
Summit achieved its sixth consecutive year of annual loan growth in excess of 20 percent during 2018.  Total net loans as of December 31, 2018, were $342.1 million, representing a 24 percent increase over the fiscal 2017 total of $276.5 million. Deposit growth mirrored loan increases, with total deposits increasing by $72.8 million or 24 percent over the previous year.  The Bank has maintained its profitability during the recent rapid growth, with return on average equity for 2018 of 15.3 percent marking Summit’s sixth consecutive year producing return on equity in excess of 10 percent.

“The organizations and individuals we work with continued to prosper in 2018,” said Craig Wanichek, president and CEO, “Summit did as well. We are also excited about the significant new relationships that were added throughout the year.”

Earlier this year, the Bank announced it took the first steps toward entering Oregon’s largest market, by hiring seven colleagues based in downtown Portland.  The team currently operates a loan production office out of a professional suite.  Summit Bank will open a full service office in downtown Portland in the near future.  “We are excited to introduce Summit Bank to our Portland business, professional and nonprofit community and are filling a niche that has been vacated by M&A activity in this town,” said Steve Watts, the Portland team’s senior vice president. “As entrepreneurial bankers, we provide our clients with nimble, creative and sensible solutions for their business banking needs.”

Summit’s liquidity and capital positions have remained strong as deposit growth has matched the Bank’s loan growth and operating earnings have continued to increase as the Bank grows.  Cash and short-term investments of $61.1 million, increased by $13.8 million or 29 percent over the trailing 12 months since December 31, 2017. Over the same period, total shareholders’ equity increased by $6.0 million to $40.6 million, an increase of 17.5 percent. 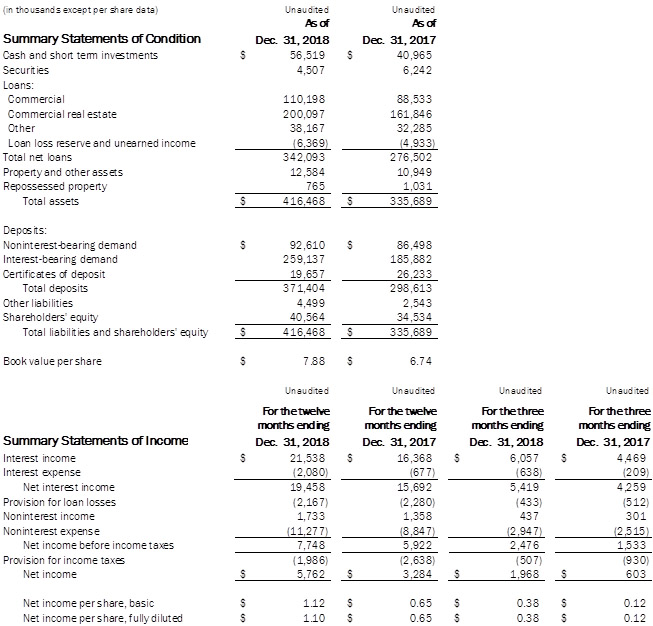