You are at:Home»Business Tips»Marketing»Tales of Adventure ~ Meriwether Lewis
By Kelly Walker, MS for SWIVEL on January 21, 2015 Marketing

The Incredible Value of Insight 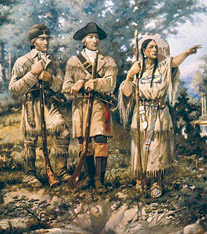 “I have cut my arm badly, and we have run out of medicine! What are we going to do? “ Thus said the rattled member of the fabled Lewis and Clark expedition, which had been going through a pretty rough patch traversing some very rugged territory.

“Don’t worry, Thomas,” Meriwether Lewis responded confidently. “I learned many things about medicinal plants when I was young. I have already spotted some yarrow to help stop the bleeding, and we have some golden seal with us as well, which is powerful against infection.”

Meriwether Lewis was one of those famous explorers who did not have much formal education in his early years. However, he would often go out on hunting forays in the middle of the night, accompanied only by his dog. During those adventures he gained all kinds of understanding that would have been hard to even put into words. Later on during his expeditions, he sometimes just knew what to do in a tough situation without even giving it much thought. His hard-won experience that had guided him in the past now helped to guide the whole expedition, when quick, decisive action was required.

In your marketing adventures, some of you have immense formal education, which can be a real asset when applied wisely. Others have spent a lifetime with your sleeves rolled up, mastering all kinds of practical skills so very powerful in running a successful business.

Lewis had spent time in the Broad River Valley in Georgia in his youth where he encountered Cherokees, who resented the intrusion of the pioneers. Lewis, however, approached these people in a way whereby some of them taught him valuable skills. He eventually made efforts to champion the rights of these people among his own “tribe.” This understanding of the Cherokee may have also helped him in dealing with other tribes in his later travels.

As you Journey through sometimes-uncharted territory, never underestimate all the little pieces of knowledge and information you have picked up over the years. They can be the missing pieces in a puzzle in some challenging situations. This background of yours can also be leveraged via lateral thinking, whereby you may see a problem in a very different light, via the insights from what many would consider a totally unrelated field. Some of the most brilliant insights in human history came from taking an idea from one field and applying it to a very different venue. So in your entrepreneurial journey, remember the example of Meriwether Lewis. Make your marketing an adventure, and don’t be afraid to explore options that can take you further than you could imagine!

Kelly Walker is the host of A Swig of Branding, creative director for Intrepid Marketing and a senior copywriter with over 20 years experience. He has masterminded scores of high-profile brand identity projects, written hundreds of ads and taught college-level marketing and copywriting courses. He resides in Bend with his wife Andrea, four boys and (finally) a little girl due September, 2015.