You are at:Home»News Pages»E-Headlines»The Story Behind The Iconic ‘Dogs Playing Poker’ Paintings
By CBN on May 14, 2020 E-Headlines

Poker is the theme of a remarkably famous collection of paintings. Dogs Playing Poker is a series of 18 oil paintings created by Cassius Marcellus Coolidge between 1894 and 1904. These remarkable paintings depict personified dogs, with 11 of the paintings featuring dogs sitting around a poker table.

A Friend in Need, painted in 1903, is by far one of Coolidge’s most famous paintings. This poker painting makes use of soft, neutral colours. Eight dogs can be seen playing a game of Poker in a low lightroom. The Bulldogs are up against five hound dogs and viewers can see these two pair up to help each other.

Brown & Bigelow authorized the production of 16 oil paintings from the Dogs Playing Poker series. The company used these famous paintings to promote cigars and as prints for calendars. The series of paintings include portraits of dogs performing human-like acts such as going on a road trip and playing football. The series commissioned by Brown & Bigelow contains the following paintings: 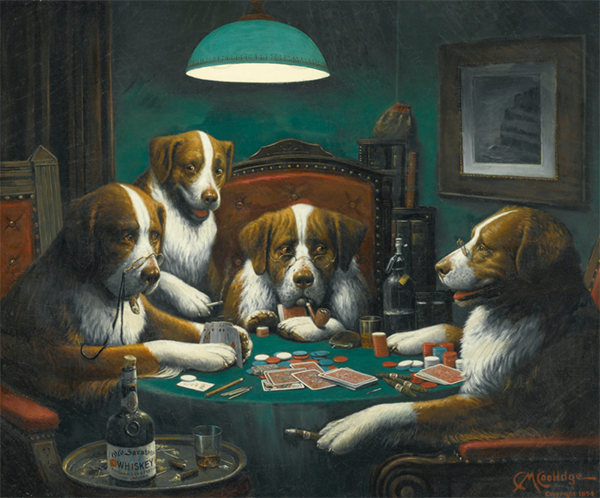 The Art of Gambling

Cassius Marcellus Coolidge makes use of the poker theme in many of his paintings throughout the series.

Poker is a gambling game that is played with a set of 52 cards. Players wagers against each other depending on the value of their poker hand. This game can also be played at online casinos for real money in Canada.

There was a demand for subtle art during the 1970’s. This movement is around the same time that Dogs Playing Poker hit its peak. The series has many famous paintings depicting dogs gambling, which is quite humorous as dogs cannot play Poker.

Pinched with Four Aces is one of the paintings that show four official dogs breaking in on an illegal gambling game. The collie tries to get away from the room filled with smoke while knocking over a few chips and glasses.

His Station and Four Aces is another famous poker themed painting. This poker painting shows dogs playing poker games on a train as the conductor tells them that it’s time to disembark. One of the dogs seems very shocked as he has almost no chips left and holds four aces.

Cassius Marcellus Coolidge’s series of paintings are considered iconic in the world of pop culture. Although many people don’t know about the history of Dogs Playing Poker, people are still able to recognize poker paintings.

Calendars still make good use of these famous paintings with dogs playing poker. These remarkable paintings have been used all over the media in various mediums. People can recognize the use of these paintings in posters, clocks, needlework kits, and even figurines.

These paintings have been inspiration and reference to many different TV shows, cartoons, and comics. Dogs Playing Poker can be seen on The Simpsons, in comics like The Far Side, and even music videos, including that of Snoop Dogg.

Many famous gambling themed paintings depict acts of lies and fraud. If you find yourself wary of gambling because of lies and fraud, take heart. Our author, Michelle H. Thomas, is a blogger whose mission is to educate her readers about the scams that they can encounter.

While Coolidge displays these themes in much of his art, there is only humor to be found in the jovial Dogs Playing Poker paintings.