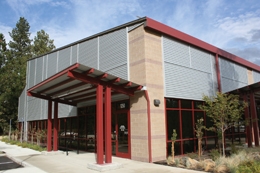 As Bend Area Transit (BAT) passes the one million boardings milestone in less than three years –  illuminating the growing need for public transportation in the metropolitan environs – the City has unveiled a new state-of-the-art facility to help the hub’s expected future growth.

Constructed with the help of the ConnectOregon lottery-bond-based initiative dollars, the recently-completed 17,000 square feet transit office and maintenance complex on Bear Creek Road provides a welcome new home for the transportation system’s staff and maintenance needs.

Previously, the BAT program, which came into being in 2006, was squeezed alongside other City departments in the nearby Public Works compound on Bend’s east side, but now has ample room to expand, with the new building accommodating administrative functions and a cutting-edge maintenance shop.

“At this facility we have secure storage for our fleet; there is a six-bay maintenance shop complete with equipment, wash stations and room for expansion, a dispatch center, a call center for customer service and ride reservations, administrative offices, and a lobby for information and ticket sales.
“There is also a multi-use space for public and staff meeting and training.

“We are excited to have a permanent home for transit operations that meets our current and future operational needs.”

The City was able to secure funding for the project through a state grant, and came up with the equivalent required matching funds by providing the building site on land it already owned.
In 2005, the Oregon Legislature authorized $100 million for the state’s ‘Multimodal Transportation Fund’ – also known as ConnectOregon – to invest in air, rail, marine and transit infrastructure.

Building on the success of that initiative, which launched some 39 projects state-wide, the government body in 2007 approved a second round of funding, also for $100 million, to continue to improve the flow of commerce, remove delays and improve safety.

This latter, ConnectOregon II, fund was the primary source for the new BAT project in Bend, with the grant proposal spearheaded by the City’s Special Projects Manager Brad Emerson.

A state government spokesman for the transportation funding program said: “A quality transportation system can attract business and improve quality of life.

“People depend on multiple modes of travel – and efficient connections between those modes – to move goods and provide services throughout the state, country, and the world.

“A sound transportation system encourages growth, reduces the cost of congestion and inefficiency, and provides a gateway to the global economy.”

Governor Ted Kulongoski, who worked with the legislature to pass ConnectOregon I and II, highlighted the goal of improving transportation connections to reduce congestion, improve options, support our economy and “enhance our highly valued way of life here in Oregon.”

He added: “These programs have been ‘fast-tracked’ to get funds on the ground and in the hands of Oregonians.
“I’m pleased as I travel around the state to see the progress being made. Communities are experiencing the benefits of the strategic investments offered by this innovative program.”

Kirby Nagelhout Construction’s Joe Wagner, who acted as project manager on the BAT facility, said: “The project involved utilizing a pre-fabricated steel building, which is a very cost-effective approach, and having a demising wall at the halfway point to separate the administrative and shop functions.

“The maintenance shop features an epoxy finish over a concrete floor, with lift stations built into the slab, plywood on the interior walls for added robustness, and much use of natural light to enhance the work environment.

“There was something of a design challenge to infill from the metal building, but this was met via continual creativity and a great overall team effort.”

He said: “Everybody had input into the design and functionality. It’s set up to be very flexible as the city’s needs change in the future.”

Ornelas said she was proud that the project incorporated many sustainable features, including native plants, low-VOC materials, extensive use of natural light, reflective flooring for increased safety in the maintenance bays, and the addition of solar panels on the roof – partly due to a state mandate that dictates a proportion of the budget for any new public building be devoted to renewable energy sources.

She also added that the facility was designed to be able to serve as an operational center for the City in the event of a natural disaster and was extremely cost effective for the public through the construction methods employed and utilization of state funds.

The building, which is set back from Bear Creek Road via a landscape buffer, also accommodates the personnel of Paratransit Services which provides the fixed route BAT and curb-to-curb Dial-A-Ride services under contract with the City of Bend.

City general vehicle fleet maintenance needs can also be met at the new facility, which has been designed with the ability to accommodate two additional service bays in the future if needed.
Some of the features for staff using the administrative offices side of the building include locker rooms, bike lockers, break rooms and showers.

City of Bend Facilities Division Manager Grant Burke, who also acted as project manager for the city, said the technologically advanced shop portion included lube-tech stations and a tank system which pumps out waste oil – which can then be transported to public works and recycled for use in a heating system to keep sanders from freezing up.

The vehicle wash bays feature numerous wands to maximize efficiency, and the drains collectors can also flow rinse-off fluids into the water/oil separator.

Burke added: “The whole team involved in this project did a great job, including such experienced, professional contractors as Kirby Nagelhout and Jack Robinson & Sons, which did the site work, as well as the architects who maximized functionality while adding interesting features to increase the aesthetic appeal of what could have been an otherwise somewhat anonymous structure.

“We also involved local neighborhood representatives, who were wonderful to work with throughout the process, and the collaborative relationship was really strong.

“This facility has an added benefit in serving the dual purpose of alleviating pressure on the public works site while offering a springboard for public transit to anchor itself in Bend in a cost-effective manner.”

The BAT system came to fruition in 2006, when the Bend City Council voted to more efficiently use resources to supplement the existing Dial-a-Ride service and improve the number of rides and options available to Bend visitors and residents. Seven fixed route services were established to serve the city.