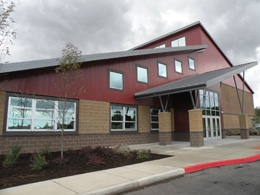 Redmond’s newest school, the $10 million Sage Elementary has opened its doors just in time for the new academic session, with staff and students excitedly adjusting to the replacement for the aging 1920’s era Evergreen site, which was shuttered last year.

Funds for the project came from the district’s $110 million 2008 bond issue, which is also financing a new high school in the pipeline for 2012.

Soaring windows blanket the 72,000 Sage building, which sits on 13 acres and also features many sustainable elements, together with an innovative new play area and surrounding green fields that can host a wide range of outdoor activities.

Principal Architect Ron Barber of BBT Architects said the original idea was to model the building after the successful Tom McCall Elementary in North West Redmond, but improvisation was needed following the realization that the footprint would not fit on the new site, off SW Wickiup Avenue.
He said: “When we worked on the new site plan it became clear we couldn’t accommodate the same prototype and still meet requirements regarding site separation, traffic flow and safety plans.

“We worked with Redmond School District and came up with a two-story scheme where classroom wings were stacked on top of each other, which reduced the building footprint while also meeting all the original goals.

“There is also much use of glass to bring in a lot of natural light and now the school is open we have heard a lot of positive feedback.

“The vision was realized with the collaboration of a lot of people in refining the design and function, including Redmond School District Project Manager Brett Hudson and Chief Operations Officer Doug Snyder.”

Barber said the consequent creation of four “neighborhoods” distinguished by features such as different color schemes provided more comfortable blocks of up to 150 students as part of a 600-capacity total 24 classrooms.

He added: “Each ‘neighborhood’ can function independently and takes on its individual personality in the mold of the old ‘school within a school’ concept.”

Principal Carolyn Espinosa was also involved on multiple fronts, including working with an interior designer on colors and furniture, as part of a comprehensive team effort.

The common goal of creating a healthy learning environment also ran to employing a number of sustainable elements, including light and energy saving features such as operable clerestory windows, a solar array mounted on a roof with superior insulative qualities, and a highly efficient state-of the-art mechanical system.

The building – which is of wood frame construction with concrete block veneer, structural concrete block and metal wrap – would likely meet much of the Leadership in Energy and Environmental Design (LEED) criteria, but the district decided not to pursue such certification, partly due to the additional costs involved.

Barber said interaction with stakeholders such as staff and administration in early-stage ‘programming meetings’ held to gather practical input on maximizing goals and expectations helped set the ‘early playbook’ for the eventual finished product.

He added that last minute changes meant a frenetic scramble to get the building complete on schedule, but that a dedicated crew of subs and contractors pulled out all the stops to ensure opening in time for the new academic year.

Project Manager Mick Howard of Keeton King Construction, Inc. recollected the site was once an old horse and alfalfa ranch which was sold off in the 80’s and lauded the new school as a great mix of the modern and traditional.

Some of the more contemporary touches include a sophisticated hydronic snowmelt system under the vehicle drop-off aprons and “kid-tested” cylindrical rubberized cushions beneath pads covering the play area – which also features new equipment like a climbing ‘web’ attracting enthusiastic attention, as evidenced by the number of students traversing its tension-mounted strands in unison during the school’s opening week.

Howard said the expansive gymnasium area featuring numerous acoustical panels incorporates a sliding accordion-style partition that can be used to separate a music room space with an elevated platform, together with cutting edge sound and lighting system. The venue can also be used for community events, which is being welcomed by the local population, especially in light of the loss of the old Evergreen Elementary as an event center option.

A central staircase and elevator are used to access the upper floor, overlooking an updated media center which links to an adjoining computer lab.

Howard added: “The building is also set up for providing additional security, including door position monitoring so staff in the administration area can tell if doors are open or closed throughout the premises. There is also a keyless card lock entry system.

He observed that another of the project’s complexities included longer lead times for materials than in the past – as suppliers maintain minimal inventories in light of a tough economic environment – which presented logistical coordination challenges.

Sage’s unveiling also comes hard on the heels of a refurbishing of Redmond’s nearby Obsidian Jr. High, completed at a cost of around $460,000 as part of the same school improvement bond approved by voters in May 2008.

The 120,000 sq ft middle school which houses 6th, 7th and 8th graders has undergone a facelift including new metal veneer siding to replace the building’s aging cedar exterior, a new roof and an updated heating system which will boost energy efficiency and comfort for the 700+ students.

Obsidian received the National Award for Excellence in 1984, and in 2000 began the arduous 6-year process of becoming an International Baccalaureate school by instituting the ‘Middle Years Programme’, which offers students a global approach to learning.

The school also features an ongoing native garden project which doubles as an outdoor classroom and a centerpiece three-dimensional historical mural of the world greeting visitors to the commons area.